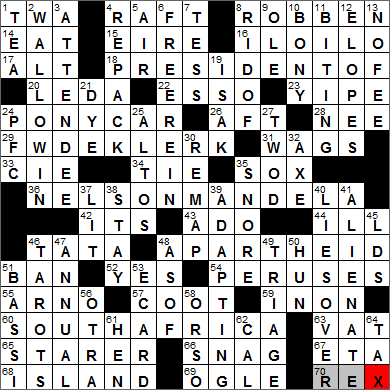 29A. Predecessor of 36-Across and sharer with him of the 1993 Nobel Peace Prize : FW DE KLERK
36A. Late political leader who wrote “Long Walk to Freedom” : NELSON MANDELA
46A. Father, in Xhosa, and a nickname for 36-Across : TATA
48A. Bygone policy in 60-Across : APARTHEID
3D. Barack or Michelle Obama, at the memorial service for 36-Across : ATTENDEE

Today’s Wiki-est, Amazonian Googlies
Across
1. United rival, once : TWA
Trans World Airlines (TWA) was a big carrier in the US, but was perhaps even more recognized for its extensive presence in Europe and the Middle East. For many years, especially after the collapse of Pan-Am, TWA was considered the unofficial flag carrier for the US. The company started in 1930, the product of a forced merger of Transcontinental Air Transport and Western Air Express. The Transcontinental and Western Air that resulted (the original meaning of the acronym TWA) was what the Postmaster General wanted, a bigger airline to which the Postal Service could award airmail contracts.

8. With 68-Across, prison where 36-Across spent 18 years : ROBBEN
(68A. See 8-Across : ISLAND)
Robben Island lies off the southwest coast of South Africa, and famously is home to a prison for political prisoners that was opened in the late 17th century and closed in 1996. The prison’s most famous inmate was Nelson Mandela. The name “Robben” is Dutch for “seal”.

15. Green land : EIRE
“Éire”, is the Irish word for “Ireland”. “Erin” is an anglicized version of “Éire” and actually corresponds to “Éirinn”, the dative case of “Éire”.

16. Philippine seaport with a reduplicative name : ILOILO
Iloilo City is the capital of the Iloilo province in the Philippines, and is known as one of the most desirable places to live in the country.

20. Yeats’s “___ and the Swan” : LEDA
In Greek mythology, Leda was the beautiful Queen of Sparta who was seduced by Zeus when he took the form of a swan. Leda produced two eggs from the union. One egg hatched into the beautiful Helen, later to be known as Helen of Troy and over whom the Trojan War was fought. The other egg hatched into the twins Castor and Pollux. Castor and Pollux had different fathers according to the myth. Pollux was the son of Zeus and was immortal, while Castor was the son of Leda’s earthly husband, and so he was a mortal. William Butler Yeats wrote a famous sonnet called “Leda and the Swan” in 1924.

22. Non-U.S. gas brand : ESSO
The brand name Esso has its roots in the old Standard Oil company as it uses the initial letters of “Standard” and “Oil” (ESS-O). The Esso brand was replaced by Exxon in the US, but ESSO is still used in many other countries.

24. Class of automobile inspired by the Ford Mustang : PONY CAR
The Ford Mustang car was introduced in 1964. Back then the Mustang wasn’t a brand new design, but was based on the Ford Falcon. The Mustang was the first of the “pony cars”, American models that are compact and affordable, as well as sporty in image and performance.

29. Predecessor of 36-Across and sharer with him of the 1993 Nobel Peace Prize : FW DE KLERK
F. W. de Klerk was the President of South Africa who led his National Party when the country ended apartheid, the policy of racial segregation. For his work in ending apartheid, De Klerk was awarded the Nobel Peace Prize in 1993 along with Nelson Mandela.

33. Abbr. at the end of a French business name : CIE
“Cie.” is an abbreviation used in French. “Cie.” is short for “compagnie”, the French word for “company”, and is used as we would use “Co.”

35. Chicago White ___ : SOX
The Chicago White Sox Major League Baseball team was established in Chicago in 1900 and originally was called the White Stockings. The name was changed because the abbreviation “Sox” for “Stockings” was regularly used in newspaper headlines.

36. Late political leader who wrote “Long Walk to Freedom” : NELSON MANDELA
As a young man, Nelson Mandela led the armed wing of the African National Congress (ANC). Mandela was eventually arrested and admitted to charges of sabotage and was sentenced to life in prison in 1964. He remained behind bars for 27 years, mainly in the infamous prison on Robben Island. As the years progressed, Mandela became a symbol of the fight against apartheid. He was released in 1990, and immediately declared his commitment to peace and reconciliation with South Africa’s white minority population. Mandela was elected president of the Republic of South Africa (RSA) in 1994, an office that he held until 1999. Nelson Mandela passed away on December 5, 2013.

46. Father, in Xhosa, and a nickname for 36-Across : TATA
Nelson Mandela was often called “Madiba”, which was his Xhosa clan name. He was also known affectionately as “Tata”, the Xhosa word for “Father”.

The Xhosa are a Bantu people who live mainly in the southeast of South Africa. The Xhosa language is the second-most common in the country, after Zulu. Among the list of notable Xhosa people are former President Nelson Mandela and retired Anglican Bishop Desmond Tutu.

48. Bygone policy in 60-Across : APARTHEID
Apartheid was the system of racial segregation used in South Africa from 1948 to 1994. “Apartheid” is an Afrikaans word meaning “apart-hood, the state of being apart”.

51. Boycott : BAN
“Boycott” is another word given to the world by the Irish! Englishman Captain Charles Boycott found himself on the wrong side of a local community in County Mayo in the west of Ireland, and in a concerted campaign he was refused service by all around him. His name lives on …

55. River that can be seen from the Uffizi Gallery : ARNO
The Arno is the principal river in the Tuscany region of Italy, passing through the cities of Florence and Pisa. Famously the Arno flooded in 1966, the worst flood in the region for centuries. There were numerous deaths and extensive destruction of priceless art treasures, particularly in Florence.

57. Geezer : COOT
Geezer and coot are two not-so-nice terms for an old man.

70. “Oedipus ___” : REX
“Oedipus Rex” (also “Oedipus the King”) is a tragedy penned by the Ancient Greek playwright Sophocles. The play tells the story of Oedipus, a man who becomes king of Thebes. Famously, Oedipus was destined from birth to murder his father and marry his mother.

Down
7. “___ of the D’Urbervilles” : TESS
The full name of Thomas Hardy’s 1891 novel is “Tess of the d’Urbervilles: A Pure Woman Faithfully Presented”. When it was originally published, “Tess …” received very mixed reviews, largely because it addresses some difficult sexual themes including rape, and sexual double standards (society’s attitude towards men vs women). I suppose the most celebrated screen adaptation is Roman Polanski’s “Tess” released in 1979. Polanski apparently made “Tess” because his wife, Sharon Tate, gave him Hardy’s novel as her last act before she was murdered by the Manson family. There is a dedication at the beginning of the movie that simply reads “To Sharon”.

12. Runs off, as Romeo with Juliet : ELOPES
In Shakespeare’s “Romeo and Juliet”, it is explicitly stated that Juliet is 13 years of age, and the assumption is that Romeo is perhaps a little older.

19. Author Dinesen : ISAK
Isak Dinesen was the pen name of the Danish author Baroness Karen Blixen. Blixen’s most famous title by far is “Out of Africa”, her account of the time she spent living in Kenya.

21. L’Oréal product : DYE
L’Oréal is a French cosmetics company, the largest cosmetics and beauty company in the world.

24. Enlistee with a chevron above an arc: Abbr. : PFC
Private First Class (PFC)

A chevron is a band that is shaped like an inverted “V”. One example of a chevron is the insignia that indicates rank on a military uniform.

45. Mormons: Abbr. : LDS
The Church of Jesus Christ of Latter-day Saints, often abbreviated to “LDS”, is known colloquially as the Mormon Church.

46. Fortunetelling decks : TAROTS
Tarot cards have been around since the mid-1400s, and for centuries were simply used for entertainment as a game. It has only been since the late 1800s that the cards have been used by fortune tellers to predict the future.

49. Battlefield procedure : TRIAGE
“Triage” is the process of prioritizing patients for treatment, especially on a battlefield. The term “triage” is French and means “a sorting”.

50. Part of Attila’s legion : HUN
In his day, Attila the Hun was the most feared enemy of the Roman Empire, until he died in 453 AD. Attila was the leader of the Hunnic Empire of central Europe and was famous for invading much of the continent. However, he never directly attacked Rome.

56. Other, in Oaxaca : OTRA
Oaxaca is a state in the southern part of Mexico on the Pacific coast. The state takes the name of Oaxaca, its largest city.