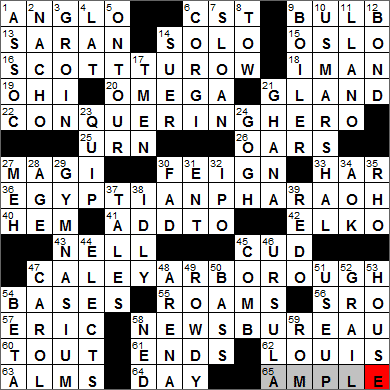 CROSSWORD SETTER: Ian Livengood
THEME: Sounds Greek … each of today’s themed answers ends with a syllable that sounds like the Greek letter RHO:

Today’s Wiki-est, Amazonian Googlies
Across
1. ___-Saxon : ANGLO
Germanic tribes invaded Great Britain from the early 5th century and created the nation that we now call England. The Anglo-Saxons, as these tribes came to be called, held sway in the country until 1066, the year of the Norman Conquest. The Anglo-Saxons were descendants of three Germanic tribes:

9. Daffodil-to-be : BULB
Daffodils are more properly called narcissus plants, a whole genus in the Amaryllis family. Ancient Greeks believe that after the god Narcissus died (while obsessed with his reflection in a pool), his remains were turned in the Narcissus flower, hence the name. Back in the British Isles, the daffodil is most famous as the national flower of Wales. It is also remembered for its appearance in Wordsworth’s poem:

I wandered lonely as a cloud
That floats on high o’er vales and hills,
When all at once I saw a crowd,
A host, of golden daffodils;

13. Big name in plastic wrap : SARAN
What’s known as plastic wrap in America, we call cling-film in Ireland. Plastic wrap was one of those unintended inventions, a byproduct of a development program to create a hard plastic cover for cars.

15. Norway’s capital : OSLO
Oslo, the capital of Norway, is an ancient city that was founded around 1048. The medieval city was destroyed by fire in 1624 and was rebuilt by the Danish-Norwegian king Christian IV and renamed to Christiana. In 1877 there was an official change of the spelling of the city’s name to “Kristiana”, and then more recently in 1925 the name was restored to the original Oslo. Things have almost gone full circle and now the center of Oslo, the area that would have been contained by the original medieval walls, has apparently been renamed to Christiana.

18. One-named supermodel from Somalia : IMAN
Iman Mohamed Abdulmajid is a Somalia-born supermodel who goes simply by the name “Iman” these days. Iman is smart cookie. Imam has a degree in Political Science and is fluent in five languages: Somali, Arabic, Italian, French and English. Since 1992 Iman has been married to British rock star David Bowie.

21. Thyroid, for instance : GLAND
The thyroid gland is found in the neck, just below the Adam’s apple. The gland produces several thyroid hormones, some of which control the rate at which the body uses energy i.e. the body’s rate of metabolism.

27. Visitors to baby Jesus : MAGI
“Magi” is the plural of the Latin word “magus”, a term applied to someone who was able to read the stars. Hence, magi is commonly used with reference to the “wise men from the East” who followed the star and visited Jesus soon after he was born.

36. King Tut, e.g. : EGYPTIAN PHARAOH
King Tut is a name commonly used for the Egyptian pharaoh Tutankhamen. Tutankhamen may not have been the most significant of the pharaohs historically, but he is the most famous today largely because of the discovery of his nearly intact tomb in 1922. Prior to this find, any Egyptian tombs uncovered by archaeologists had been ravaged by grave robbers. Tutankhamen’s magnificent burial mask is one of the most recognizable of all Egyptian artifacts.

42. Nevada city on the Humboldt River : ELKO
The city of Elko came into being in 1868 as a settlement built around the eastern end of a railway line that was constructed from California and that was destined for Utah. When that section of the line was completed. the construction crews moved on towards the Nevada/Utah border, and the settlement was left behind to eventually form the city of Elko

45. Bovine mouthful : CUD
Ruminants are animals that “chew the cud”. Ruminants eat vegetable matter but cannot extract any nutritional value from cellulose without the help of microbes in the gut. Ruminants collect roughage in the first part of the alimentary canal, allowing microbes to work on it. The partially digested material (the cud) is regurgitated into the mouth so that the ruminant can chew the food more completely exposing more surface area for microbes to do their work.

47. Four-time Daytona 500 winner : CALE YARBOROUGH
Cale Yarborough is a former NASCAR driver and owner. Yarborough was the first NASCAR driver to appear on the cover of “Sports Illustrated”.

56. “No seating” letters on Broadway : SRO
Standing Room Only (SRO).

57. ___ the Red (Viking explorer) : ERIC
According to Icelandic tradition, Erik the Red was the man responsible for founding the first Nordic settlement in Greenland. Erik had a famous son, the explorer Leif Ericson.

62. Armstrong of jazz : LOUIS
Louis Armstrong was born in New Orleans in 1900. Armstrong had a poor upbringing, and only stayed in school till he was 11 years old. The exact origin of Louis’s nickname “Satchmo” seems to be a little unclear. One story is that he used to dance for pennies in New Orleans as a youngster and would hide those pennies in his mouth away from the other kids. For this he earned the nickname “satchel mouth”, which was shortened to “Satchmo”.

Down
1. Part of N.A.A.C.P.: Abbr. : ASSOC
The full name of the NAACP, the National Association for the Advancement of Colored People, is remarkable in that it actually still uses the old but offensive term “colored people”. The NAACP was founded in 1909, by a group that included suffragette and journalist Mary White Ovington, wealthy socialist William English Walling, and civil rights activist Henry Moscowitz. Another member of the founding group was W. E. B. Du Bois, the first African American to earn a doctorate at Harvard University.

4. Back muscle, for short : LAT
The muscles known as the “lats” are the latissimi dorsi, the broadest muscles in the back. “Latissimus” is the Latin for “broadest” and “dorsum” is Latin for “back”.

6. Small Welsh dog : CORGI
The Welsh corgi is a herding dog, and one of the oldest breeds in Britain. Corgis aren’t speedy enough to do their job by running around livestock like collies, and instead nip at the heels.

8. AAA offering : TOW
The American Automobile Association (AAA) is a not-for-profit organization focused on lobbying, provision of automobile servicing, and selling of automobile insurance. The AAA was founded in 1902 in Chicago and published the first of its celebrated hotel guides back in 1917.

10. Law officer wearing a star : US MARSHAL
The office of US Marshal is the oldest federal law enforcement office in the country, and was created in 1789. The federal agency called the United States Marshal Service (USMS) was formed in 1969. Included in the list of duties of the USMS is the apprehension of federal fugitives, transportation of federal prisoners and the protection of endangered federal witnesses.

11. Grassy expanse in the Southwest : LLANO
“Llano” is the Spanish word for “plain”.

12. Name said before and after James : BOND
James Bond was of course the creation of the writer Ian Fleming. Fleming “stole” the James Bond name from an American ornithologist. The number 007 was also “stolen”, from the real life English spy John Dee who was active in the late 16th century. Dee would sign his reports to Queen Elizabeth I with a stylized 007 to indicate that the reports were for “her eyes only”.

17. Some Feds : T-MEN
A T-man is a law-enforcement agent of the US Treasury.

21. West African nation : GHANA
The name “Ghana” means “warrior king” in the local language. The British established a colony they called Gold Coast in 1874, later to become Ghana, as part of the scramble by Europeans to settle as much of Africa as they could. One of Ghana’s most famous sons is Kofi Annan, the diplomat who served as General Secretary of the UN for ten years until the beginning of 2007.

24. Artist Vincent van ___ : GOGH
Vincent Van Gogh was a Dutch post-impressionist painter who seems to have had a very tortured existence. Van Gogh only painted for the last ten years of his life, and enjoyed very little celebrity while alive. Today many of his works are easily recognized, and fetch staggering sums in auction houses. Van Gogh suffered from severe depression for many of his final years. When he was only 37, he walked into a field with a revolver and shot himself in the chest. He managed to drag himself back to the inn where he was staying but died there two days later.

27. “Whatever” : MEH
“Meh!” is one of those terms unfamiliar to me outside of crosswords. It is a modern colloquialism meaning “I’m not great, but not bad”.

32. Wall St. debut : IPO
An Initial Public Offering (IPO) is the very first offer of stock for sale by a company on the open market. In other words, an IPO marks the first time that a company is traded on a public exchange. Companies have an IPO to raise capital to expand (usually).

37. Accounts of Scheherazade : TALES
Scheherazade was a Persian queen of legend, and the storyteller in the wonderful “One Thousand and One Nights”.

46. Andress of “Dr. No” : URSULA
The actor Ursula Andress was quite the sex symbol in the sixties, famously playing Honey Ryder in the first James Bond movie “Dr. No”. Andress was born in Switzerland and is fluent in English, French, Italian, German and her native Swiss-German.

47. Yule song : CAROL
The word “carol” came into English via the Old French word “carole”, which was a “dance in a ring”. When “carol” made it into English, about 1300 AD, the term was used to describe a dance as well as a joyful song. Around 1500 AD, carols that were sung came to be associated with Christmas.

52. Quest in a Monty Python movie : GRAIL
The word “grail” comes into English via French and Latin from Greek, and means a “shallow cup”. The Holy Grail is a sacred object in some Christian traditions, usually said to be the cup, plate or chalice used by Jesus at the Last Supper. The grail also features in Arthurian legend, a Monty Python movie, and in Dan Brown’s “The Da Vinci Code”.

53. Monopoly purchase before a hotel : HOUSE
The commercial game of Monopoly is supposedly a remake of “The Landlord’s Game” created in 1903 by a Quaker woman called Lizzie Phillips. Phillips used her game as a tool to explain the single tax theory of American economist Henry George. The Landlord’s Game was first produced commercially in 1924. The incredibly successful derivative game called Monopoly was introduced in 1933 by Charles Darrow, who became a very rich man when Parker Brothers bought the rights to the game just two years later in 1935.

54. Old VHS rival : BETA
The video standard known as VHS is more fully referred to as the Video Home System. VHS was one of many standards touted by various manufacturers in the seventies. The biggest rival to VHS was of course Betamax, but we all knew which of the two standards won the final round in that fight.

58. Homer’s neighbor on “The Simpsons” : NED
Ned Flanders lives next door to Homer on TV’s “The Simpsons”. Ned is voiced by actor Harry Shearer and has been around since the very first episode aired in 1989.