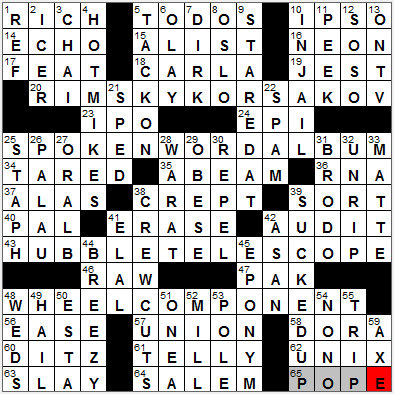 CROSSWORD SETTER: Ethan Cooper
THEME: WHEEL COMPONENT … each of the theme answers starts with a COMPONENT part of a WHEEL:

Today’s Wiki-est, Amazonian Googlies
Across
1. Like the people on the Forbes 400 list : RICH
The Forbes 400 is a list published annually by “Forbes Magazine”, a list of the 400 Americans with the largest net worth. Top of the list for the 17 years up to 2010 was Bill Gates. In the year 2000, the 400 wealthiest people controlled 12.2% of the country’s Gross Domestic Product. That’s 12.2% … I wonder what Thomas Jefferson would have thought of that …

16. Like an “Open 24 hours” sign, perhaps : NEON
The basic design of neon lighting was first demonstrated at the Paris Motor Show in 1910. Such lighting is made up of glass tubes containing a vacuum into which has been introduced a small amount of neon gas. When a voltage is applied between two electrodes inside the tube, the neon gas “glows” and gives off the familiar light.

18. Former French first lady ___ Bruni-Sarkozy : CARLA
The very glamorous Carla Bruni is the wife of French President Nicolas Sarkozy. She is Sarkozy’s third wife, and this is the first marriage for Bruni. The couple met at a dinner party in November 2007 and were married just three months later. Bruni was born in Italy and was granted French nationality not long after the marriage.

20. “The Tsar’s Bride” composer : RIMSKY-KORSAKOV
Nikolai Rimsky-Korsakov was one of the great Russian composers from the Romantic Era. Rimsky-Korsakov’s most famous works are probably “Capriccio Espagnol” and “Scheherazade”. While he was composing, Rimsky-Korsakov spent much of his working life as an officer in the Imperial Russian Navy.

23. N.Y.S.E. debut : IPO
An Initial Public Offering (IPO) is the very first offer of stock for sale by a company on the open market. In other words it marks the first time that a company is traded on a public exchange. Companies have an IPO to raise capital to expand (usually). Anyone owning stock in the company prior to the IPO can find that after the IPO that stock is now worth something on the market (as opposed to just on paper), and can become quite wealthy overnight.

25. It has its own Grammy category : SPOKEN WORD ALBUM
The first Grammy Awards Ceremony was held in 1959 and focused on recognizing outstanding achievement in the recording industry. The idea of a Grammy Award came up when recording executives were working on the Hollywood Walk of Fame project in the fifties. These executives concluded that there were many people in the recording industry deserving of accolades but who would probably never make it to the Walk of Fame. As a result, they founded the National Academy of Recording Arts and Sciences. The Academy considered naming the award the “Eddies” after Thomas Edison, but then opted for “Grammy” after Edison’s invention: the gramophone.

35. Crosswise, at sea : ABEAM
The beam is the widest part of a nautical vessel. Something pointed out as lying “abeam” is something that it is 90 degrees from a line through the bow and the stern, in other words directly off to the right or the left.

36. Some genetic coding, for short : RNA
Ribonucleic Acid (RNA) is an essential catalyst in the manufacture of proteins in the body. The genetic code in DNA determines the sequence of amino acids that make up each protein. Amino acids are delivered in the correct sequence by what is called transfer RNA and then formed into proteins by ribosomal RNA.

40. Crony : PAL
A crony is a friend or companion. The term originated as slang in Cambridge University in England in the 1600s. “Crony” is probably derived from the Greek “khronios” meaning “long-lasting”.

43. NASA launch of 1990 : HUBBLE TELESCOPE
The famous Hubble Space Telescope was installed in orbit by the Space Shuttle Discovery in 1990. The telescope was named for the astronomer Edwin Hubble, the man who changed our view of the universe by postulating that the universe is expanding.

58. Spanish-speaking explorer : DORA
“Dora the Explorer” is a cartoon series shown on Nickelodeon. Part of Dora’s remit is to introduce the show’s young viewers to some Spanish words and phrases.

61. Programme shower : TELLY
“Telly” is the familiar term for a television in the British Isles, as opposed to our American “TV”. And one watches “programmes” on a telly, as opposed to “programs” here in the US.

62. Operating system since 1969 : UNIX
I always think of an operating system as that piece of software that sits between the hardware on my computer and the programs that I choose to run. Developers of application programs don’t really have to worry about being able to “talk to” the countless different types of hardware that can exist on a computer, they just need to talk to the handful of operating systems that are out there, like Windows, MAC and Unix. The operating system takes care of the rest.

64. Witchcraft trials city : SALEM
Salem is a seaport on the Massachusetts coast. It is noted as the location of the Salem Witch Trials of 1692, an event that the city commemorates during the run up to Halloween every year in October.

Down
1. One who knows what it means to travel : REF
“Traveling” is a basketball term, an illegal move of the feet while holding the ball.

3. Spiced Indian tea : CHAI
Chai is a drink made from spiced black tea, honey and milk, with “chai” being the Hindi word for “tea”. We often called tea “a cup of char” growing up in Ireland, with “char” being our slang word for tea, derived from “chai”.

6. Oil of ___ : OLAY
Oil of Olay was developed in South Africa in 1949. When Oil of Olay was introduced internationally, it was given slightly different brand names designed to appeal in the different geographies. In Ireland we know it as Oil of Ulay, for example, and in France it is Oil of Olaz.

7. Straight-bladed dagger : DIRK
“Dirk” is the Scots word for dagger, and is the name given to a knife that is worn hanging from a belt in traditional dress that includes a kilt. The dagger worn in a Scotsman’s sock isn’t a dirk (a popular misconception) but rather is called a “sgian dubh”, which translates as “a black or hidden knife”.

8. Home for Ibsen : OSLO
Oslo, the capital of Norway, is an ancient city that was founded around 1048. The medieval city was destroyed by fire in 1624 and was rebuilt by the Danish-Norwegian king Christian IV and renamed to Christiana. In 1877 there was an official change of the spelling od the city’s name to “Kristiana”, and then more recently in 1925 the name was restored to the original Oslo. Things have almost gone full circle and now the center of Oslo, the area that would have been contained by the original medieval walls, has apparently been renamed to Christiana.

Henrik Ibsen was a Norwegian playwright, considered by many to be the greatest playwright since William Shakespeare. Ibsen was famous for shocking his audiences by exploring subjects that offended the sensibilities of the day (the late 1800s).

22. ___ folder : SPAM
I think that the oft-quoted story may be true that the term “SPAM”, used for unwanted email, is taken from a “Monty Python” sketch. In the sketch (which I’ve seen) the dialog is taken over by the word SPAM, a play on the glut of canned meat in the markets of Britain after WWII. So “SPAM” is used for the glut of emails that takes over online communication. I can just imagine nerdy Internet types (like me) adopting something from a “Monty Python” sketch to describe an online phenomenon …

25. Kind of infection : STAPH
Staphylococcus is a genus of bacteria. Under a microscope it can be seen that the individual bacteria form into clusters like bunches of grapes. “Staphylococcus” comes from the Greek word meaning “bunch of grapes”.

26. Pacific island nation : PALAU
Palau is a tiny island nation lying 500 miles east of the Philippines, and 2,000 miles south of Japan. Palau was once a Spanish possession and was sold by Spain to Germany in the late 19th century. During WWI, Japan invaded the islands (as Japan had declared war on Germany) and was awarded the islands as a territory by the League of Nations at the end of hostilities. In WWII the US took Palau from the Japanese in a bloody battle in 1944. Palau emerged from American administration in 1994 and is now a sovereign state.

27. Toothbrush brand : ORAL-B
The Oral-B toothbrush was introduced to the world in 1950, designed by a California periodontist. The first “model” was the Oral-B 60, a name given to reflect the 60 tufts in the brush. And in 1969, the Oral-B was the first toothbrush to get to the moon, as that was the toothbrush of choice for the crew of the Apollo 11 spacecraft.

28. “The ___ Home,” 1996 Emilio Estevez film : WAR AT
“The War at Home” is a 1996 drama film about a Vietnam War hero who returns to the US suffering from post-traumatic stress disorder. The returning soldier is played by Emilio Estevez, and the soldier’s father is played by Estevez’s real-life father, Martin Sheen.

Tortellini are stuffed pasta that are ring-shaped, or navel shaped. In fact tortellini can also be called “umbellico”, the Italian for “belly button”.

41. Israeli carrier : EL AL
The Israeli national airline is called El Al (Hebrew for “to the skies”). El Al does not fly on the Sabbath, although this has been subject of some controversy since the airline’s founding in 1948.

45. Louis Braille or Louis Chevrolet : EPONYM
An eponym is a name for something derived from the name of a person.

Louis-Joseph Chevrolet was a Swiss race car driver who co-founded the Chevrolet Motor Car Company in 1911. The company logo to this day is a stylized Swiss cross, in honor of Chevrolet’s Swiss roots.

49. Word repeated before “the gang’s all here” : HAIL
“Hail, Hail, the Gang’s All Here” is a song written in 1917, although the tune comes from Gilbert & Sullivan’s “The Pirates of Penzance”.

51. Most eligible for service : ONE-A
The US government maintains information on all males who are potentially subject to military conscription, using what is called the Selective Service System. In the event that a draft was held, men registered would be classified into groups to determine eligibility for service. Class 1-A registrants are those available for unrestricted military service. Other classes are 1-A-O (conscientious objector available for noncombatant service), 4-A (registrant who has completed military service) and 4-D (Minister of religion).