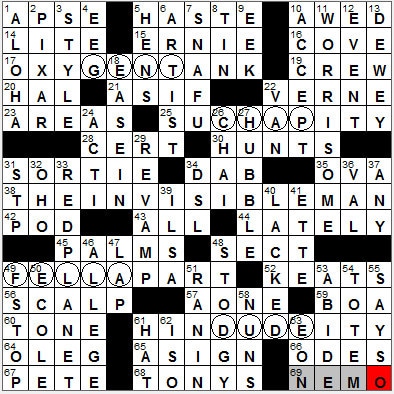 CROSSWORD SETTER: Lynn Lempel
THEME: THE INVISIBLE MAN … all of the theme answers include circled letters that spell out a word that means MAN:


Today’s Wiki-est, Amazonian Googlies
Across
1. Rounded cathedral feature : APSE
The apse of a church or cathedral is a semicircular recess in an outer wall, usually with a half-dome as a roof and often where there resides an altar. Originally apses were used as burial places for the clergy and also for storage of important relics.

14. Miller ___ (low-calorie beer) : LITE
The first light beer was produced by Chicago’s Meister Brau brewery in the sixties. Miller took over Meister Brau, reformulated the light beer using the same process and became the first of the big breweries to come out with a light beer, “Lite Beer from Miller” introduced in 1973. There really wasn’t a serious competitor to Miller Lite in its niche until Anheuser-Busch finally came up with a process and a product in 1982 … Bud Light.

15. Banks in the Baseball Hall of Fame : ERNIE
First baseman Ernie Banks was known as “Mr. Cub”, and played his entire 19-year professional career with the Chicago Cubs.

19. Regatta group : CREW
The word “regatta” is Venetian dialect and was originally used to describe boat races among the gondoliers of Venice on the Grand Canal back in the mid-1600s.

20. Prince who became Henry V : HAL
“Prince Hal” is a term used for Prince Henry, the son of the title character in Shakespeare’s plays “Henry IV, Part 1” and “Henry IV, Part 2”. Prince Hal then becomes the king in “Henry V”.

22. Jules who wrote “Twenty Thousand Leagues Under the Sea” : VERNE
Jules Verne really was a groundbreaking author. Verne pioneered the science fiction genre, writing about space, air and underwater travel, long before they were practical and proved feasible. Verne is the second most translated author of all time, with only Agatha Christie beating him out.

28. Breath mint in a roll, informally : CERT
Certs was the first breath mint to be marketed nationally in the US, hitting the shelves in 1956. It’s called a mint, but it isn’t really as it contains no mint oil, but instead has its famous ingredient named “Retsyn”.

59. Flapper’s neckwear : BOA
Flappers were the so-called new breed of young women of the twenties. The flappers wore their hair short (with ringlets), dressed in short skirts and generally rebelled against the accepted norms of the time. The term “flapper” comes from the 1920 movie “The Flapper” starring Olive Thomas as a young woman who lived the more liberal lifestyle that was emerging at that time.

61. Vishnu or Shiva : HIN(DU DE)ITY
The Hindu Trinity is composed of Brahma the creator, Vishnu the maintainer or preserver, and Shiva (also Siva) the destroyer or transformer.

64. Fashion designer Cassini : OLEG
Oleg Cassini, the French-born American fashion designer, had two big names particularly associated with his designs. In the sixties he produced the state wardrobe for First Lady Jacqueline Kennedy, and he was also the exclusive designer for Hollywood’s Gene Tierney, who was Cassini’s second wife.

67. Tennis’s Sampras : PETE
Pete Sampras is a retired Greek-American tennis professional. Sampras was rated number one in the word rankings for six years in a row in the nineties.

68. Broadway honors : TONYS
The full name for the Tony Award is the Antoinette Perry Award for Excellence in Theatre. Antoinette Perry was an American actress and co-founder of the American Theatre Wing, one of the organizations that selects the award recipients.

69. Captain in “Twenty Thousand Leagues Under the Sea” : NEMO
In the 1954 movie version of “20,000 Leagues Under the Sea”, Captain Nemo goes down with his ship. In the novel by Jules Verne the fate of Nemo and his crew isn’t quite so cut and dry, although the inference is perhaps that they did indeed head for Davy Jones’ Locker.

Down
1. ___ State (Hawaii’s nickname) : ALOHA
“Aloha” has many meanings in English: “affection, love, peace, compassion and mercy”. More recently it has come to mean “hello” and “goodbye”, but only since the mid-1800s.

2. Film studio behind “Toy Story” and “Up” : PIXAR
Pixar Animation Studios started out as part of Lucasfilm, George Lucas’s production company. Lucas sold what was to become Pixar to Apple CEO Steve Jobs in 1986. Pixar produced its first feature film in 1995, the fabulous “Toy Story”, and followed it with a string of hits. The company was then sold again, to Walt Disney in 2006 when valued at $7.4 billion. That transaction resulted in Steve Jobs becoming the single largest shareholder in the Walt Disney Company.

“Up” is the tenth movie released by Pixar studios, featuring wonderful animation as we have come to expect from Pixar. The film earned itself two Academy Awards. The main voice actor is Ed Asner, whose animated persona as Carl Fredricksen was created to resemble Spencer Tracy in his last film, “Guess Who’s Coming to Dinner”.

4. Brain wave readout, for short : EEG
An electroencephalogram (EEG) is a record of electrical activity caused by the firing of neurons within the brain. The EEG might be used to diagnose epilepsy, or perhaps to determine if a patient is “brain dead”.

6. Monet or Manet : ARTIST
Claude Monet painted the harbor of Le Havre in the north of France in 1872, giving it the title “Impression, Sunrise”. The painting is not a “realistic” representation of the scene in front of him, hence the name “impression”. It was this very painting that gave rise to the name of the Impressionist movement.

The French painter Edouard Manet is responsible for many great works including “Le déjeuner sur l’herbe”, a work much praised by novelist Emile Zola.

7. Megamistake : SNAFU
SNAFU is an acronym standing for Situation Normal: All Fouled Up (well, that’s the “polite” version!). As you might imagine, the term developed in the US Army during WWII.

8. Sn, to a chemist : TIN
Dmitri Mendeleev was a Russian chemist. When Mendeleev classified elements according to their chemical properties, he noticed patterns and was able to group elements into his famous 1869 Periodic Table. So powerful was his table that he actually predicted the properties of some elements that had not even been discovered in 1869. Element number 101, mendelevium, was named after Mendeleev.

13. “___ Defeats Truman” (famous 1948 headline) : DEWEY
“The Chicago Tribune” was first published in 1847. The most famous edition of “The Trib” was probably in 1948 when the headline was “DEWEY DEFEATS TRUMAN”, on the occasion of the presidential election. When it turned out Truman had actually won, the victor picked up the paper with the erroneous headline and posed for photographs with it … a famous, famous photo, that must have stuck in the craw of the editor at the time.

26. Spiced tea : CHAI
Chai is a drink made from spiced black tea, honey and milk, with “chai” being the Hindi word for “tea”. We often called tea “a cup of char” growing up in Ireland, with “char” being our slang word for tea, derived from “chai”.

27. Telescope serviced by astronauts : HUBBLE
The famous Hubble Space Telescope was installed in orbit by the Space Shuttle Discovery in 1990. The telescope was named for the astronomer Edwin Hubble, the man who changed our view of the universe by postulating that the universe is expanding.

33. Mars, with “the” : RED PLANET
The surface of the planet Mars has a very high iron oxide content, so Mars is red because it is rusty!

36. Kilmer of “The Doors” : VAL
Val Kilmer’s first big leading role in a movie was playing Jim Morrison in Oliver Stone’s 1991 biopic “The Doors”. A few years later he was chosen for the lead in another big production, “Batman Forever”. Things haven’t really gone as well for Kilmer since then, I’d say. Off the screen, he flirted with the idea of running for Governor of New Mexico in 2010. A Hollywood actor as a Governor? Would never happen …

39. Rick’s beloved in “Casablanca” : ILSA
Ilsa Lund was of course played by Ingrid Bergman in the 1942 movie “Casablanca”. I love the words of one critic describing the chemistry between Bogart and Bergman in this film: “she paints his face with her eyes”. Wow …

49. Camera lens setting : F-STOP
Varying the f-stop in a lens varies how big the lens opening (the aperture) is when a photograph is taken. Smaller apertures (higher f-stop values) admit less light, but result in sharper photographs.

50. Place to learn in Lille : ECOLE
French for school is “école”.

Lille is a large city in the very north of France sitting right on the border with Belgium. The name “Lille” is a derivation of the term “l’isle” meaning “the island”.

54. Emblem carved on a pole : TOTEM
Totem is the name given to any entity that watches over a group of people. As such, totems are usually the subjects of worship. So, “totem poles” are really misnamed as the poles are not intended to represent figures to be worshiped, but rather are heraldic in nature often celebrating the legends or notable events in the history of a tribe.

58. Convent residents : NUNS
Convents have been religious houses since the 1200s, but it wasn’t until the 1700s that convents became purely female institutions.