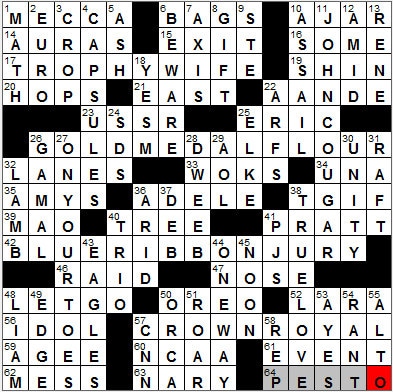 CROSSWORD SETTER: Randall J. Hartman
THEME: Awards … each of the theme answers starts with something that can be awarded, say as a prize:


Today’s Wiki-est, Amazonian Googlies
Across
1. Holy city of Islam : MECCA
Mecca is in the Makkah province of Saudi Arabia and is the holiest city in Islam. Every year several million Muslims perform the Hajj, a holy pilgrimage to Mecca.

10. Cracked open, as a door : AJAR
Our word “ajar” is thought to come from Scottish dialect, in which “a char” means “slightly open”.

22. Cable network specializing in “real life” shows : A AND E
The A&E television network used to be a favorite of mine, with the “A&E” standing for “arts and entertainment”. A&E started out airing a lot of the old classic dramas, as well as biographies and arts programs. Now there seems to be more reality TV, with one of the flagship programs being “Dog the Bounty Hunter”. A slight change of direction I’d say …

23. Reagan’s “evil empire,” for short : USSR
It was President Ronald Reagan who first used the term “evil empire” to describe the Soviet Union in the days of the Cold War.

25. Attorney general Holder : ERIC
Eric Holder is the Attorney General of the United States, and is the first African American to hold the position. Holder was close to President Obama during the presidential campaign. He was the campaign’s legal advisor and was also one of the three members on the Obama vice-presidential selection committee, which of course opted for Vice-President Joe Biden.

33. Stir-fry vessels : WOKS
“Wok” is a Cantonese word, the name of the frying pan now used in many Asian cuisines.

35. Writer Tan and singer Grant : AMYS
Amy Tan lives not too far from here in Sausalito, just north of San Francisco. She is an American writer of Chinese descent whose most successful work is “The Joy Luck Club”. “The Joy Luck Club” was made into a movie produced by Oliver Stone in 1993. The novel and movie tell of four Chinese-American immigrant families in San Francisco who start the Joy Luck Club, a group playing Mahjong for money and eating delicious food.

Amy Grant is known as “The Queen of Christian Pop” and her most famous songs are Gospel and Contemporary Christian works. “Baby Baby” is one such song, released in 1991, a number-one hit for her.

38. Ready-for-the-weekend cry : TGIF
“Thank God It’s Friday” (TGIF) is a relatively new expression that originated in Akron, Ohio. It was a catchphrase used by disk jockey Jerry Healy of WAKR in the early seventies.

39. Chinese Chairman : MAO
Mao Zedong was born on December 16, 1893 in the Hunan Province of China. As Mao was the son of a peasant farmer, his prospects for education were limited. Indeed he left school at age 13 to work on the family farm but did eventually get to secondary school in Changsa, the provincial capital. In the years following, Mao continued his education in Beijing and actually turned down an opportunity to study in France.

41. Brooklyn’s ___ Institute : PRATT
The Pratt Institute is an art college in Brooklyn, New York. The school started out as an engineering college in 1887, founded by oil industry pioneer Charles Pratt. However, the engineering program was dropped in 1993 due to small enrolment numbers.

42. Panel for a complex legal case : BLUE RIBBON JURY
A blue ribbon jury is a panel of highly qualified experts selected by a court to decide very specialized disputes.

Ribbons are often awarded in competitions to the winners. Here in the US, the awards for first, second and third place are blue, red and yellow ribbons in that order. In Canada, the same awards are red for first, then blue and yellow.

50. Nabisco cookie : OREO
The Oreo was the biggest selling cookie in the 20th century, and almost 500 billion of them have been produced since they were introduced in 1912 by Nabisco. In those early days the creme filling was made with pork fat, but today vegetable oils are used instead. If you take a bite out of an Oreo sold outside of America you might notice a difference from the homegrown cookie, as coconut oil is added in the overseas version to give a different taste.

57. Popular Canadian whisky : CROWN ROYAL
Crown Royal is the best-selling Canadian whiskey in the US. Crown Royal was introduced to the market by Seagram in honor of the royal visit of King George VI and Queen Elizabeth to Canada in 1939.

60. Final Four org. : NCAA
The National Collegiate Athletic Association (NCAA) dates back to the Presidency of Theodore Roosevelt. When his son broke his nose playing football at Harvard, President Roosevelt turned his attention to the number of serious injuries and even deaths occurring in college sports. He instigated meetings between the major educational institutions leading to the formation of the Intercollegiate Athletic Association of the United States (IAAUS) in 1906, which was given the remit of regulating college sports. The IAAUS became the NCAA in 1910.

64. Italian sauce : PESTO
The term “pesto” applies to anything made by pounding. What we tend to know as “pesto” sauce is more properly called “pesto alla genovese”, pesto from Genoa in northern Italy.

Down
2. Replacement for the mark and franc : EURO
The European Union today stands at a membership of 27 states. The Euro is the official currency of only 16 of the 27. The list of states not using the Euro includes the UK, Denmark, Sweden and Norway.

7. W.W. II enemy : AXIS
Before WWII, Hungary’s prime minister was lobbying for an alliance between Germany, Hungary and Italy and worked towards such a relationship that he called an “axis”. The main Axis powers during the war of course were Germany, Italy and Japan. However, also included in the relationship were Romania, Bulgaria and the aforementioned Hungary.

9. Sault ___ Marie, Mich. : STE
In the summer of 2010 I spent a very interesting afternoon watching ships make their way through the Soo Locks and Soo Canal between Lake Superior and the lower Great lakes. The name “Soo” comes from the US and Canadian cities on either side of the locks, both called Sault Ste. Marie.

11. “Hurts So Good” singer, 1982 : JOHN COUGAR
John Mellencamp started to use the stage name Johny Cougar in 1976, a name that evolved into John Cougar, and then to John Cougar Mellencamp in the eighties. In 1992 the “Cougar” was dropped altogether and Mellencamp has been performing under his own name since then. Mellencamp was married to former supermodel Elaine Irwin for eighteen years, but the two recently decided to split. Mellencamp’s new girlfriend is actress Meg Ryan.

13. Russo of “Thor” : RENE
The lovely and very talented actress Rene Russo is a native of Burbank, California. Russo went to high school with actor/director Ron Howard, but dropped out in tenth grade. At seventeen she was given the opportunity to train as a model, and within a very short time appeared on the cover of “Vogue”. As her modelling jobs slowed down in her early thirties, she made a career change and studied theater and acting. I am so glad she did, as Rene Russo is one of my favorite actresses …

18. “O.K.” from Huck Finn : YES’M
“The Adventures of Huckleberry Finn” by Mark Twain was first published in 1884, not here in the US but rather in England. The original launch planned for the US had to be delayed until the following year because some rascal had defaced the plate for one of the illustrations, making an obscene joke. Once the problem was spotted a new plate had to be made, and 30,000 copies already printed had to be reworked to cover up the obscenity.

22. Pekingese sounds : ARFS
The pekingese breed originated in China, as one might suspect from the name. Breeding practices have resulted in the the dog having many health problems, including breathing issues related to the “desirable” flat face. Standards have been changed in recent years, demanding an “evident muzzle” in an attempt to breed healthier dogs.

24. ’60s teach-in organizer: Abbr. : SDS
Students for a Democratic Society (SDS) was an activist group in the sixties. The SDS organized the largest student strike in the history of the United States on 26 April 1968, with about a million students staying away from class that day. The “Students for a Democratic Society” name was revived in 2006 with the foundation of a new US-based student organization with left wing beliefs. Today’s SDS was founded by a pair of high school students from Greenwich Village, New York.

25. Actress Sommer : ELKE
Elke Sommer is a German-born actress who was at the height of her success on the silver screen in the sixties. She won a Golden Globe as Most Promising Newcomer Actress for her role opposite Paul Newman in 1964’s “The Prize”. She also sings and has released several albums. Now she focuses on painting, producing artwork that is strongly influenced by Marc Chagall.

26. Egyptian president Nasser : GAMAL
Gamal Abdel Nasser was the second president of Egypt, from 1956 until he died in 1970. He stood alongside Muhammad Naguib, Egypt’s first president, during the Egyptian Revolution of 1952 which overthrew the ruling monarchy of Egypt and Sudan. Nasser was an advocate of Pan-Arabism, an ideology promoting unification of Arab peoples and countries. President Nasser went so far as forming the United Arab Republic (UAR), a union between Egypt and Syria that started in 1958 but fell apart in 1961 when Syria withdrew.

37. Belle of the ball, for short : DEB
Deb is short for “debutante”, translating from French as “female beginner”.

41. Bedwear, informally : PJS
Our word “pajamas” comes to us from the Indian subcontinent, where “pai jamahs” were loose fitting pants tied at the waist and worn at night by locals and ultimately by the Europeans living there. And “pajamas” is another of those words that I had to learn to spell differently when I came to America. In the British Isles the spelling is “pyjamas”.

48. Neeson of “Taken” : LIAM
Irish actor Liam Neeson got his big break when he played Oskar Schindler in the Spielberg epic, “Schindler’s List”. He was in the news more recently when he lost his wife, actress Natasha Richardson, in a tragic skiing accident in 2009.

“Taken” is a fabulous thriller movie released in 2008. It stars Liam Neeson as kind of an older James Bond-ish charcter, and he is great in the role. I just heard the wonderful news that “Taken II” has started filming.

50. Killer whale : ORCA
The taxonomic name for the killer whale is Orcinus orca. The use of the name “orca”, rather than “killer whale”, is becoming more and more common. The Latin word “Orcinus” means “belonging to Orcus”, with Orcus being the name for the Kingdom of the Dead.

55. Voice below soprano : ALTO
In choral music, an alto is the second-highest voice in a four-part chorus made up of soprano, contr(alto), tenor and bass. The word “alto” describes the vocal range, that of the deepest female singing-voice, whereas the term “contralto” describes more than just the alto range, but also its quality and timbre. An adult male’s voice (not a boy’s) with the same range as an alto is called a “countertenor”.

57. Where to see Anderson Cooper : CNN
Anderson Cooper is a great news personality on CNN and on various shows around the dial. My favorite appearances of his, although he would call them trivial I am sure, were hosting a great reality game show called “The Mole” that aired in 2001.