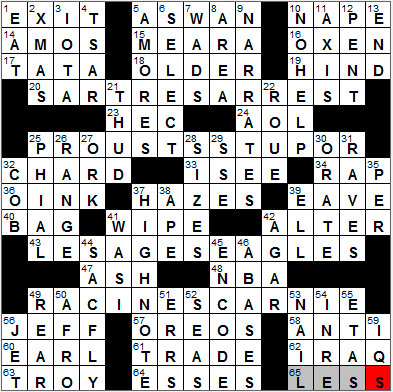 CROSSWORD SETTER: Bernice Gordon
THEME: French Writer’s Anagrams … each of the theme answers is in two parts, the first being the name of a French writer, and the second an anagram of that writer’s name:


Today’s Wiki-est, Amazonian Googlies
Across
5. Dam on the Nile : ASWAN
From ancient times right up to 1970 the annual flooding of the Nile was a significant event in Egypt. The flooding allowed the deposition of fertile silt far beyond the banks of the river, helping the region’s agriculture. However, the flooding was unpredictable. So the Aswan Dam was built in the sixties and from 1970 the flooding was brought under control.

14. Famous ___ cookies : AMOS
Wally Amos was a talent agent, one who was in the habit of taking home-baked cookies with him as an enticement to get celebrities to see him. He was urged by friends to open a cookie store (the cookies were that delicious, I guess) and this he did in Los Angeles in 1975 using the name “Famous Amos”. The store was a smash hit and he was able build on the success by introducing his cookies into supermarkets. The brand was eventually bought up making Wally a rich man, and Famous Amos cookies are still flying off the shelf.

15. Stiller’s partner in comedy : MEARA
Anne Meara has been married to fellow comedic actor Ben Stiller since 1954. Anne and Ben are the parents of actors Ben and Amy Stiller.

17. “Bye for now” : TATA
An Englishman might say “tata” or “cheerio” instead of “goodbye”. Well, supposedly so!

– George Walker Bush (who became US President)
– Pauline Robinson Bush (who died of leukemia at a young age)
– John Ellis Bush (“Jeb”, who became Governor of Florida)
– Neil Mallon Bush (who became a Texas businessman)
– Marvin Pierce Bush (who was on the board of the company responsible for security at the World Trade Center before the September 11 attack)
– Dorothy Bush Koch (who is co-chair of the Barbara Bush Foundation for Family Literacy)

20. French writer’s apprehension by the police? : SARTRE’S ARREST
John-Paul Sartre was a leading French philosopher, as well as a writer and political activist. Sartre was one of the few people to have been awarded a Nobel Prize and refused to accept it. He was named winner of the prize for Literature in 1964, for his first novel “Nausea”. Before his win, Sartre knew that his name was on the list of nominees so he wrote to the Nobel Institute and asked to be withdrawn from consideration. The letter somehow went unread, so he found himself having to refuse the award after he had been selected.

23. 1970s TV’s “___ Ramsey” : HEC
“Hec Ramsey” is a TV western starring Richard Boone that aired in the early seventies. The series was unusual in that it was set late in the days of the Old West, and the title character focused less on using a gun, and more on using forensic techniques to catch the bad guys.

24. Tech company spun off from Time Warner : AOL
AOL’s “first” Initial Public Offering was in 1992. Years later the company was picked up by Time Warner (not a great investment for Time Warner, as it turned out). AOL was spun off as a separate entity again in 2009 and the new company had a “second” IPO that same year.

34. Offering from Lil Jon or Fat Joe : RAP
Lil Jon is a rapper, with the real name Jonathan Mortimer Smith. That’s all I know …

Fat Joe is the stage name of rapper Joseph Cartegena from the Bronx in New York City. Fat Joe’s name reflects his body size, although he lost almost 90 pounds in 2011, dropping his weight from a high of 350 pounds.

48. LeBron James’s org. : NBA
LeBron James plays basketball for the Miami Heat. James seems to be in demand for the covers of magazines. He became the first African American man to adorn the front cover of “Vogue” in March 2008. That made him only the third male to make the “Vogue” cover, following Richard Gere and George Clooney.

“Carny” is American slang, and is short for “carnival worker”.

56. Actor Bridges of “The Big Lebowski” : JEFF
The first major role for Jeff Bridges was in the wonderful 1971 movie, “The Last Picture Show”. My favorite Bridges movie though is 1984’s “Starman” in which he played a very charming alien opposite Karen Allen. As an amateur photographer myself, I also appreciate Jeff Bridges’ photographic work. I own his book of fabulous images called “Pictures: Photographs by Jeff Bridges”.

“The Big Lebowski” is a 1998 comedy directed by Joel and Ethan Coen that stars Jeff Bridges in the title role. The film’s script is loosely based on the Raymond Chandler novel “The Big Sleep”. I thought “The Big Lebowski” was just “okay” though …

57. Creme-filled cookies : OREOS
The Oreo was the biggest selling cookie in the 20th century, and almost 500 billion of them have been produced since they were introduced in 1912 by Nabisco. In those early days the creme filling was made with pork fat, but today vegetable oils are used instead. If you take a bite out of an Oreo sold outside of America you might notice a difference from the homegrown cookie, as coconut oil is added in the overseas version to give a different taste.

60. ___ of Sandwich : EARL
Meats placed between slices of bread was first called a sandwich in the 18th century, named after the Fourth Earl of Sandwich. The Earl was fond of eating “sandwiches” while playing cards at his club.

63. “Iliad” locale : TROY
Ilion (or in Latin “Ileum”), was the ancient name for the city of Troy. It’s this name for Troy that gives rise to the title of Homer’s epic poem “Iliad”.

4. Former St. Petersburg royal : TSAR
The term czar (also tsar) is a Slavic word and was first used as a title by Simeon I of Bulgaria in 913 AD. “Czar” is derived from the word “Caesar”, which was synonymous with “emperor” at that time.

11. Germany, Italy and Japan, in W.W. II : AXIS
Before WWII, Hungary’s prime minister was lobbying for an alliance between Germany, Hungary and Italy, and worked towards such a relationship that he called an “axis”. The main Axis powers during the war of course, were Germany, Italy and Japan. However, also included in the relationship were Romania, Bulgaria and the aforementioned Hungary.

22. Womanizer : ROUE
“Roue” is a lovely word, I think, describing a less then lovely man. A roue could otherwise be described as a cad, someone of loose morals. “Roue” comes from the French word “rouer” meaning “to break on a wheel”. This describes the ancient form of capital punishment where a poor soul was lashed to a wheel and then beaten to death with cudgels and bars. I guess the suggestion is that a “roue” with his loose morals deserves such a punishment.

27. Mork’s birthplace, on TV : ORK
“Mork & Mindy” was broadcast from 1978 to 1982. We were first introduced to Mork (played by Robin Williams, of course) in a special episode of “Happy Days”. The particular episode in question has a bizarre storyline culminating in Fonzie and Mork having a thumb-to-finger duel. Eventually Richie wakes up in bed, and alien Mork was just part of a dream! Oh, and “Nanu Nanu” means both “hello” and “goodbye” back on the planet Ork. “I am Mork from Ork, Nanu Nanu”. Great stuff …

31. Parties that might have glow-in-the-dark freebies : RAVES
As you might imagine, I’ve never been to a rave, and don’t have one upcoming in my diary. And as they can start at 2 a.m. then I’m unlikely ever to experience one. A rave is generally an all-night party featuring loud, electronically synthesized music usually played by a DJ, as opposed to a live band.

42. Actor John of “Sands of Iwo Jima” : AGAR
John Agar was a Hollywood actor from Chicago, noted for his on-screen appearances alongside John Wayne. Agar appeared with Wayne in six films in all, including “Sands of Iwo Jima”, “Fort Apache” and “She Wore a Yellow Ribbon”. Agar was also the first husband of actress Shirley Temple.

44. Run-scoring hit that puts the batter out : SAC FLY
A sac(rifice) fly, in baseball.

50. Jackson 5 hairdo : AFRO
The Jackson 5 family group was originally made up of brothers Tito, Jackie, Jermaine, Marlon and Michael.

52. Caribbean and Mediterranean : SEAS
The Caribs are an American Indian people that live in the Lesser Antilles islands, part of the West Indies. The Caribbean Sea takes its name from the Carib people.

56. MetLife Stadium footballer : JET
Just like the New York Giants, the New York Jets are based in New Jersey, headquartered in Florham Park. The Jets and the Giants have a unique arrangement in the NFL in that the two teams share Metlife Stadium in East Rutherford, New Jersey. The Jets were an AFL charter team, formed in 1959 as the Titans of New York. The Titans changed their name to the Jets in 1963.

59. Figs. for geniuses : IQS
Although it is correct these days to say that the abbreviation IQ stands for “intelligence quotient”, the term was actually coined by German psychologist William Stern, so it actually is an abbreviation for the German “Intelligenz-Quotient”.