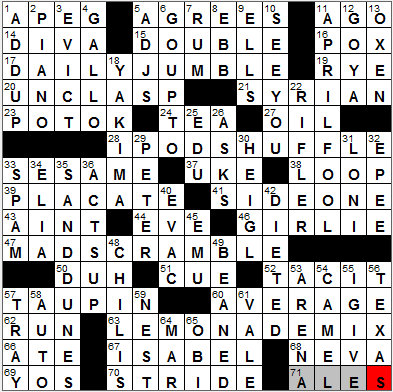 CROSSWORD SETTER: Doug Peterson
THEME: Moving About … all of the theme answers end with a word that means “to move about”:


Today’s Wiki-est, Amazonian Googlies
14. La Scala headliner : DIVA
“Diva” comes to us from Latin via Italian. “Diva” is the feminine form of “divus” meaning “divine one”. The word is used in Italy to mean goddess or fine lady, and especially is applied to the prima donna in an opera. We often use the term to describe a singer with a big ego.

The La Scala Opera House opened in 1778, built on the site of the church of Santa Maria della Scala, which gave the theater its name.

16. Chicken ___ : POX
Chicken pox is a viral infection, a classic disease of childhood most commonly caught by 4-10 year olds. There is a complication that can arise later in life as the virus sometimes reactivates to cause shingles.

17. Newspaper puzzle with anagrams : DAILY JUMBLE
The Daily and Sunday Jumbles are syndicated puzzles from Tribune Media Services that are syndicated widely in newspapers all over the English-speaking world. The first Jumble was created in 1954 by Martin Naydel.

21. Neighbor of an Iraqi : SYRIAN
The modern state that we know as Syria was established after WWI as a French mandate. Syria was granted independence from France in 1946.

23. “The Chosen” author Chaim : POTOK
Chaim Potok was a Jewish American author. His most famous novel is “The Chosen”, which recounts the life of a Jewish youth in New York City during WWII.

27. Source of the Beverly Hillbillies’ wealth : OIL
“The Beverly Hillbillies” was a rags-to-riches sitcom that aired from 1962 to 1971, a creation of writer Paul Henning. Buoyed by the success of “Hillbillies”, Henning created another sitcom in 1965, one that was a complete opposite in terms of plot, the riches-to-rags story of “Green Acres”.

28. MP3 player that weighs less than an ounce : IPOD SHUFFLE
The iPod is Apple’s signature line of portable media players. It first hit the market in 2001 with a hard drive-based device, now known as the iPod Classic. Later models all use flash memory, allowing a smaller form factor. The smallest of the flash-based models is the iPod Shuffle, which was introduced in 2005.

37. Island instrument, briefly : UKE
The ukulele originated in the 1800s and mimicked a small guitar brought to the Hawaiian Islands by Portuguese immigrants.

51. Snooker stick : CUE
Snooker is a fabulous game, played on what looks like a large pool table (12′ x 6′ if full size). Snooker is a derivative of the older game of billiards and is believed to have been developed by British Army officers who were stationed in India in the latter half of the 1800s. “Snooker” was a word used in the British military for first-year cadets and for inexperienced soldiers. Somehow that usage morphed into the name of the game.

57. Elton John collaborator Bernie : TAUPIN
Bernie Taupin is the famed lyricist who wrote the words to so many of the songs written and published by Elton John. The pair were brought together by the music paper “New Musical Express” in England. Elton John submitted some of his work to the paper in 1967, and Taupin answered an ad for songwriters. The paper brought the two together, and they’ve worked together ever since.

68. River through St. Petersburg : NEVA
The Neva is a very large river that spills into the Gulf of Finland at the beautiful city of St. Petersburg. The river forms an expansive delta as it reaches the Baltic Sea and the delta gives rise to numerous islands, with the number of islands further increased by a network of canals. The historic part of the city is built on these islands giving St. Petersburg a very Venetian feel. I had the privilege of visiting the city some years ago, and I can attest that it is indeed spectacular …

Down
2. Alicia Keys’s instrument : PIANO
Alicia Keys is the stage name of Alicia Cook, an R&B and soul singer from Hell’s Kitchen in New York City.

4. Vintner Ernest or Julio : GALLO
E J Gallo Winery was founded by Ernest and Julio Gallo in Modesto, California in 1933. Gallo is the largest exporter of wine from the State of California.

7. ___ and Coke : RUM
The cocktail known as a Cuba Libre is basically a Rum and Coke, although traditionally it needs some lime juice as well.

11. Victim of a springtime hoax : APRIL FOOL
April Fool’s Day is celebrated on April 1st in the western world. In the US (and Ireland) one can make practical jokes all day long if one wants. But in the UK there is a noon deadline. Anyone pranking after midday is called an “April Fool”.

12. “The Naked Maja” painter : GOYA
Francisco Goya was a Spanish painter, often called the last of the Old Masters and the first of the moderns. Two of his most famous works are “The Nude Maja” and “The Clothed Maja”.

18. City southeast of Seattle : YAKIMA
The city and county of Yakima lie southeast of Mount Rainier in the state of Washington. The Yakima Valley is recognized as one of the best apple-producing regions in the world, and it also produces three quarters of all the hops grown in the US.

25. University URL ender : EDU
A domain name is basically the address of a website on the Internet. About a year ago I moved the website for this blog to a new address (from puzzle.paxient.com to NYTCrossword.com). Like in the real world, one pays for an address. I now own (well rent!) both of the addresses used for this blog, but choose to “do business”, publish the blog, at the more memorable address … NYTCrossword.com. It’s sort of like preferring to have a Park Avenue address instead of one on say Elm Street. In the Internet world, elements of the domain name are intended to indicate what type of activity goes on at a particular address. So an address with “.com” implies a “company” website, a “.org” implies a non-profit website and “.edu” implies an education website. But in reality anyone can rent whatever address they want, as it just goes to the highest bidder. Most folks remember “.com” addresses, so they are the most popular. “.com” is meant to imply a “business address” as I say, but it can even be used for somewhere to chat about crosswords!

29. Noted pumpkin eater : PETER
“Peter, Peter Pumpkin Eater” is a nursery rhyme here in the US that has been around at least since the early 1800s. It is possibly derived from an older English rhyme, but pumpkins certainly weren’t in the English version.

30. Katherine of “Knocked Up” : HEIGL
Katherine Heigl is best associated with the television show “Grey’s Anatomy” on which she plays Dr. Izzie Stevens. Not a show I’ve ever watched …

31. Actress Anderson : LONI
Loni Anderson’s most famous role was that of Jennifer Marlowe on the sitcom “WKRP in Cincinnati”. Anderson has been married four times, most famously to actor Burt Reynolds from 1988 to 1993.

32. Sport with lunges : EPEE
The French word for sword is épée. In competitive fencing the épée is connected to a system that records an electrical signal when legal contact is made on an opponent’s body.

33. Unsolicited e-mail : SPAM
I think that the oft-quoted story may be true that the term SPAM, used for unwanted email, is taken from a “Monty Python” sketch. In the sketch (which I’ve seen) the dialog is taken over by the word SPAM, a play on the glut of canned meat in the markets of Britain after WWII. So “SPAM” is used for the glut of emails that takes over online communication. I can just imagine nerdy Internet types (like me) adopting something from a “Monty Python” sketch to describe an online phenomenon …

34. “Viva Zapata!” director Kazan : ELIA
Elia Kazan won Oscars for best director in 1948 for “Gentleman’s Agreement” and in 1955 for “On The Waterfront”. In 1999 he was given an Academy Lifetime Achievement Award. He also directed “East of Eden”, which introduced James Dean to movie audiences, and “Splendor in the Grass”, which included Warren Beatty in his debut role.

“Viva Zapata!” is a 1952 film directed by Elia Kazan. The film is based on the life the Mexican revolutionary Emiliano Zapata, with a screenplay written by John Steinbeck.

45. Ostrich look-alike : EMU
The emu has had a tough time in Australia since man settled there. There was even an “Emu War” in Western Australia in 1932 when migrating emus competed with livestock for water and food. Soldiers were sent in and used machine guns in an unsuccessful attempt to drive off the “invading force”. The emus were clever, breaking their usual formation and adopting guerrilla tactics, operating as smaller units. After 50 days of “war”, the military withdrew. Subsequent requests for military help for the farmers were ignored. The emus had emerged victorious …

48. Spicy cook-off dishes : CHILIS
The full name for the dish that is often called simply “chili” is chili con carne, Spanish for “peppers with meat”. The dish was invented by immigrants from the Spanish Canary Islands in the city of San Antonio, Texas (a city which the islanders founded). The San Antonio Chili Stand was a popular attraction at the 1893 Chicago World’s Fair, and that stand introduced the dish to the rest of America and to the world.

54. Caravan beast : CAMEL
“Caravan” derives from the Persian “karwan”, the word for a group of desert travelers. Over in the British Isles “caravan” is the name we give to travel trailers.

58. Prius, for one : AUTO
The Toyota Prius is still the most fuel-efficient, gasoline-powered car sold in the US, according to the EPA. The name “Prius” is a Latin word meaning “ahead, leading”. In the US we pronounce the name “pree-us”, but across the Atlantic it’s pronounced “pry-us”.

65. Geisha’s sash : OBI
The sash worn as part of traditional Japanese dress is known as an obi. The obi can be tied in what is called a butterfly knot.