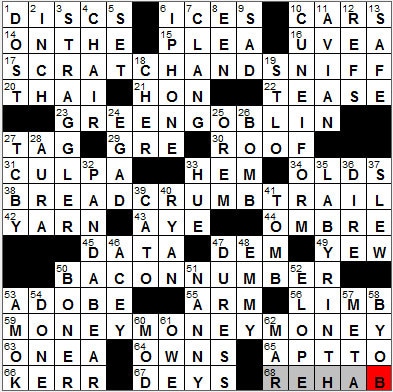 CROSSWORD SETTER: Aimee Lucido
THEME: MONEY, MONEY, MONEY … all of the theme answers start with a slang term for “money”:


Today’s Wiki-est, Amazonian Googlies
16. Eye part : UVEA
The uvea is the middle of the three layers that make up the eyeball.

27. Identify in a Facebook photo : TAG
Facebook users know that they can “tag” their online photos, identifying people who are included in the image.

29. Source of stress for a coll. senior : GRE
Passing the Graduate Record Examination is usually a requirement for entry into graduate school here in the US.

31. Mea ___ : CULPA
Roman Catholics are very familiar with the Latin phrase “mea culpa” meaning “my fault”, as it is used in the Latin Mass. The additional term “mea maxima culpa” would translate as “my most grievous fault”.

38. Navigation aid for Hansel and Gretel : BREADCRUMB TRAIL
“Hansel and Gretel” is a Germanic fairy tale found in the collection of the Brothers Grimm. It tells of two siblings, Hansel and Gretel, the children of a woodcutter. The youngsters are abandoned in a forest at the behest of an evil stepmother. Clever Hansel hears of the plan and leaves a trail of pebbles so that he and his sister can find their way home, which they do. But the children are abandoned again, and this time leave a trail of breadcrumbs. Unfortunately, the crumbs are eaten by birds, so the children do indeed become lost. But, eventually, they all live happily ever after …

44. Card game of Spanish origin : OMBRE
Ombre is a card game, with the name derived from the Spanish word for “man” (“hombre”). Ombre is a trick-taking game, very popular in the 16th century and of significant importance in the history of card games. Ombre was the first game in which trumps were determined by rounds of bidding rather than just the luck of the draw. This of course is an important feature in other games today, most notably bridge.

49. Wood in archery bows : YEW
Yew is the wood of choice for the longbow, a valued weapon in the history of England. The longbow is constructed with a core of yew heartwood (as the heartwood resists compression) that has a sheath of yew sapwood (as the sapwood resists stretching). The yew was in such demand for longbows that for centuries yew trees were in short supply in Britain and the wood had to be imported from all over Europe.

50. Degrees of separation in a Hollywood parlor game : BACON NUMBER
The idea behind the concept of six degrees of separation is that, on average, every person on the planet is separated from every other by just six “degrees”. That is, everyone is linked to everyone else as a “friend of a friend”, six times. There’s also a popular trivia game called “Six Degrees of Kevin Bacon” in which players have to show that a particular actor can be related to Kevin Bacon in fewer than six links, with each link being a movie in which two actors appear together.

53. Building made of bricks : ADOBE
Adobe has been around a long time, and has been used in dry climates all over the world. The original form of the word “adobe” dates back to Middle Egyptian times, about 2000 BC. The original “spelling” is dj-b-t, and translates as mud (sun-dried) brick.

59. 1976 Abba song … or a hint to the starts of 17-, 23-, 38- and 50-Across : MONEY, MONEY, MONEY
I am an unapologetic fan of ABBA’s music. ABBA was of course the Swedish group that topped the charts in the seventies and eighties. The name ABBA is an acronym formed from the first letters of the given names of each of the band members, namely: Agnetha, Benny, Bjorn and Anni-Frid.

63. Prime draft status : ONE-A
The US government maintains information on all males who are potentially subject to military conscription using what is called the Selective Service System (SSS). In the event that a draft is held, men registered would be classified into groups to determine eligibility for service. Class 1-A registrants are those available for unrestricted military service. Other classes are 1-A-O (conscientious objectors available for noncombatant service), 4-A (registrants who have completed military service) and 4-D (ministers of religion).

66. Deborah of “The King and I” : KERR
The lovely Deborah Kerr was a Scottish actress who made a real name for herself on the American stage and in Hollywood movies. Despite all her success, and six nominations for a Best Actress Oscar, she never actually won an Academy Award. In 1967 she appeared in the James Bond film “Casino Royale” at the age of 46, the oldest Bond Girl of all time.

67. Bygone Tunisian V.I.P.’s : DEYS
“Dey” was a title used in North Africa, for rulers in Algiers, Tunis and Tripoli.

3. One finishing a marathon in eight hours, say : STRAGGLER
The marathon is run over 26 miles and 385 yards, and of course commemorates the legendary messenger-run by Pheidippides from the site of the Battle of Marathon back to Athens. The distance run today was decided in 1921, and matches the route of the modern-day Marathon-Athens highway.

6. “There’s an app for that” device : IPHONE
Apple started selling the iPhone at 6 pm local time on June 29, 2007, with hundreds of customers lined up outside stores all over the world. Not me. I use a pay-as-you-go phone from T-Mobile, that cost me less than $45 for the whole of last year for calls and text (including many to Ireland) …

10. Writing with wedges and such : CUNEIFORM
Cuneiform writing is a very early form of written expression that uses characters that are variants of a wedge shape. The first form of cuneiform writing was developed in Sumer (in modern-day Iraq), and was largely a system of pictographs. Over time, the number of characters decreased and became smaller and simpler, until they eventually evolved into the characters that we use in alphabetic writing today.

18. Often-impersonated diva : CHER
Cher’s real name is Cherilyn Sarkasian, born in 1946. In her acting career she was nominated for the Best Supporting Actress Oscar of 1984 for her performance in “Silkwood”. She was even more successful in 1998 when she won the Best Actress Oscar for playing Loretta Castorini in “Moonstruck”.

19. Normandy battle site : ST-LO
Saint-Lo is a town in Normandy that was occupied by Germany in 1940. Saint-Lo stood at a strategic crossroads, and so there was intense fighting there during the Normandy invasion of 1944. After the bombardment, very little of the town was left standing.

24. “Gosh almighty!” : EGAD
“Egad” was developed as a polite way of saying “oh God” in the late 1600s, and is an expression of fear or surprise somewhat like “good grief!”.

25. Utah city : OREM
Orem, Utah was originally known as “Sharon” (a Biblical name), then “Provo Bench”, and in 1914 it was given the family name of a local railroad operator, “Orem”. Orem gave itself the nickname “Family City USA” and, backing up that claim in 2010, “Forbes” rated it the 5th best place in the country to raise a family.

27. Franchise offering “soft serve” and “hand scooped” : TCBY
TCBY is a chain of stores selling frozen yogurt, founded in 1981 in Little Rock, Arkansas. The acronym TCBY originally stood for “This Can’t Be Yogurt”, but this had to be changed due to a lawsuit being pressed by a competitor called “I Can’t Believe It’s Yogurt”. These days TCBY stands for “The Country’s Best Yogurt”.

28. Subtle glow : AURA
An aura is an intangible quality that surrounds a person or thing, a “je ne sais quoi”. “Je ne sais quoi” is French for “I don’t know”.

32. Chinese zoo attraction : PANDA BEAR
Taxonomic classification of the giant panda has been a subject of great debate for years, the main question being whether it belongs to the bear or raccoon family. The accepted opinion these days, based on molecular studies, seems to be that the panda is in fact a true bear.

35. Feature of the ancient palace of Minos at Knossos : LABYRINTH
Minos was the king of Crete in Greek mythology, and the son of Zeus and Europa. He had an elaborate labyrinth built under the island, designed by the architect Daedalus and his son Icarus (who famously died trying to escape from the island by “flying” away). In the labyrinth, King Minos kept the Minotaur, a dreadful creature with the head of a bull on the body of a man.

39. Ancient Roman censor : CATO
Cato the Elder was a Roman statesman, known historically as “the elder” in order to distinguish him from his great-grandson, Cato the Younger. His ultimate position within Roman society was that of Censor, making him responsible for maintaining the census, and for supervising public morality.

40. Actress Meg : RYAN
Meg Ryan is the stage name of the actress Margaret Mary Hyra. Her big break came with the excellent 1989 movie “When Harry Met Sally”, from which she went on to star in some of the greatest romantic comedies ever made.

41. Tut’s resting place : TOMB
King Tut is a name commonly used for the Egyptian pharaoh Tutankhamen. Tutankhamen may not have been the most significant of the pharaohs historically, but he is the most famous today largely because of the discovery of his nearly intact tomb in 1922. Prior to this find, any Egyptian tombs uncovered by archaeologists had been ravaged by grave robbers. Tutankhamen’s magnificent burial mask is one of the most recognizable of all Egyptian artifacts.

46. ___-deucy (backgammon variety) : ACEY
Acey-deucy is a fast-played variant of backgammon. Apparently the game has been a favorite with members of the armed forces since the days of WWI.

48. TV award : EMMY
The Emmy Awards are the television equivalent of the Oscars in the world of film, the Grammy Awards in music and the Tony Awards for the stage. Emmy Awards are presented throughout the year, depending on the sector of television being honored. The most famous of these ceremonies are the Primetime Emmy Awards and the Daytime Emmy Awards. The distinctive name of “Emmy” is a softened version of the word “immy”, the nickname given to the video camera tubes found in old television cameras.

53. Crazedly : AMOK
The phrase “to run amok” (sometimes “to run amuck”) has been around since the 1670s and is derived from the Malay word for “attacking furiously”, “amuk”. The word “amok” was also used as a noun, to describe Malay natives who were “frenzied”. Given Malaya’s troubled history, the natives probably had good reason for that frenzy …

57. Self-referential, in modern lingo : META
In recent decades the prefix “meta-” has started to be used as a standalone adjective. In this sense “meta” means “self-referential”, describing something that refers to itself. For example, “This sentence starts with the word ‘this’ and ends with the word ‘this’” might be called a meta sentence. A movie that is about the making of the very same movie could also be described as meta.

58. Like many restaurants without a liquor lic. : BYOB
Bring Your Own Beer/Bottle/Booze.

60. Like some ’60s fashion : MOD
Mod is short for modernist, and describes a subculture that originated in London in the late fifties. Young men who called themselves mods tended to wear tailored suits, listen to pop music and drive around on Italian motor scooters. Mods came into conflict with another subculture that emerged at the same time in the UK called the rockers. Rockers were into rock and roll music, and drove motor cycles. I remember as a young kid in school having to declare myself as either a mod or a rocker. I don’t think our “gangs” back then were quite the same as they are today though …