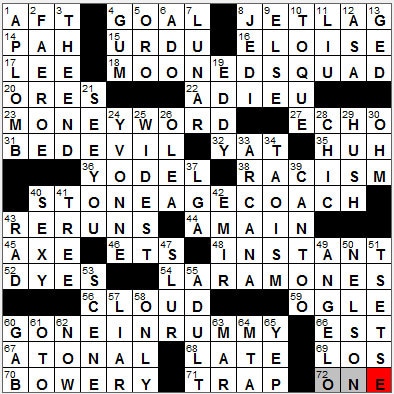 CROSSWORD SETTER: Rolf Hamburger
THEME: ONE More to Add … all of the theme answers are common expressions or terms, but with the letters ONE inserted:

8. Globetrotter’s woe : JETLAG
If you’ve ever suffered from jetlag, especially in a place like Japan, then “Lost in Translation” starring Bill Murray and Scarlett Johansson is a must-see movie. I cannot recommend it enough.

14. Tuba sound : PAH
The tuba is the lowest pitched of all the brass instruments and is one of the most recent additions to the modern symphony orchestra (usually there is only one included in an orchestral line-up). “Tuba” is the Latin word for “trumpet, horn”.

15. Language of Pakistan : URDU
Urdu is one of the two official languages of Pakistan (the other being English). Urdu partly developed from Persian, and as such, it is written from right to left.

16. Plaza Hotel moppet : ELOISE
Kay Thompson wrote the “Eloise” series of children’s books. Kay Thompson actually lived at the Plaza Hotel in New York, the setting she would choose for her “Eloise” stories. Eloise started out as a hit song for Thompson, a success that she parlayed into the book franchise.

17. Washington and ___ University : LEE
Washington and Lee University (W&L) is a private school located in Lexington, Virginia. The school started out as the Augusta Academy in 1749 and was renamed to Liberty Hall in 1776, aptly enough given the year. The original school moved to its current location in 1780, becoming Liberty Hall Academy. In 1796, George Washington gave the school a huge donation (for those times) of $20,000, which was recognized by with a further name change, to Washington Academy. Robert E. Lee served as the school’s president after the Civil War until he died in 1870, at which time the final renaming took place, to Washington and Lee University.

18. Team on the receiving end of a prank? : MO(ONE)D SQUAD (from MOD SQUAD)
The first recorded mooning incident took place in 66 AD, during the First Roman-Jewish War. Roman soldiers decided to moon Jewish pilgrims as they traveled to the Jewish Temple in Jerusalem.

The 1999 movie “The Mod Squad” is an adaptation of the television show of the same name.

“Ciao” is the Italian for “bye”. “Arrivederci” is more formal, and translates better as “goodbye”.

32. China’s Sun ___-sen : YAT
Sun Yat-sen is known as the “Father of the Nation” in China, and is uniquely revered in both the mainland of China and on the island of Taiwan. During his rule as president of the country he promoted his political philosophy known at the Three Principles of the People, namely nationalism, democracy and the people’s livelihood.

40. Athletic trainer for Neanderthals? : ST(ONE) AGE COACH (from STAGECOACH)
The Homo genus includes, of course, the species Homo sapiens (modern humans), but that’s it. All the rest of the species that were part of the genus Homo are all extinct. The last known species related to humans was Homo neanderthalensis (Neanderthal Man) which died off about 24,000 years ago. However, another species discovered in Indonesia in 2003 was Homo floresiensis (Flores Man … aka “hobbit”), and it may possibly have lived as recently as 12,000 years ago.

44. At full tilt : AMAIN
“Amain” is an old term meaning at great speed, or of great strength.

46. SAT company : ETS
The Educational Testing Service (ETS) was founded in 1947, and produces standardized tests for students from kindergarten through college. Perhaps most famously, ETS operates the SAT testing process.

52. Items in many lists of ingredients : DYES
You have got to wonder about all those dyes added to prepared foods …

54. West Coast punk rock group? : LA RAM(ONE)S (from LA RAMS)
“The Ramones” were an American punk rock band. The group formed in Forest Hills, New York in the mid-seventies. Arguably, it was the first punk rock group, and defined the genre. Punk rock … something else that’s not my cup of tea …

60. Entered pie-eyed? : G(ONE) IN RUMMY (from GIN RUMMY)
Gin rummy is a variant of the slower game of standard rummy, and was introduced in 1909 by Elwood Baker and his son.

66. Guinness Book suffix : -EST
“The Guinness Book of World Records” holds some records of its own. It is the best-selling copyrighted series of books of all time, and is one of the books most often stolen from public libraries! The book was first published in 1954 by two twins, Norris and Ross McWhirter. The McWhirter twins found themselves with a smash hit, and eventually became very famous in Britain on a TV show based on world records.

67. Not in any key : ATONAL
Atonal music is not written in any particular key, and therefore does not have a key signature.

70. Stereotypical bum’s place : BOWERY
The Bowery is a neighborhood at the south end of Manhattan Island in New York City. The name “Bowery” comes from the old Dutch word for a farm, namely “bouwerij”.

Down
1. Self-assurance : APLOMB
Aplomb is such a lovely word, meaning confidence and assurance. It is a French word that translates literally as “perpendicularity”, or “on the plumb line”. The idea is that someone with aplomb is poised, upright and balanced.

2. Denmark’s ___ Islands : FAEROE
The Faroe Islands (also Faeroe Islands) are a group of islands lying halfway between Scotland and Iceland. The Faroe Islands are part of the Kingdom of Denmark and were granted the power of self-governance in 1948.

7. Kind of eclipse : LUNAR
In a lunar eclipse the moon passes through the Earth’s shadow. In the shadow, although the moon is no longer in direct sunlight, it’s not in total darkness. Some sunlight is refracted (bent) by the Earth’s atmosphere around our planet and illuminates the moon. This refracted light is red in color, so that the moon appears to turn red at the height of the lunar eclipse.

8. Yoda, notably : JEDI
Yoda is one of the most beloved characters in the “Star Wars” series of films. Yoda’s voice was provided by the great modern-day puppeteer Frank Oz of “Muppets” fame.

10. Chef’s topper : TOQUE
A toque was a brimless style of hat that was very fashionable in Europe, in France in particular, in the 13th to 16th centuries. Nowadays we associate toques with chefs, as it is the name given to a chef’s hat (toque blanch, “white hat”, in French). A chef’s toque is quite interesting. Many of them have exactly 100 pleats, often said to signify the number of ways that an egg can be cooked.

11. Imprisoned Peace Nobelist ___ Xiaobo : LIU
Liu Xiaobo is a Chinese writer and political activist. He has campaigned vigorously for many years for the end of single-party rule in his homeland. He has been incarcerated as a political prisoner since the middle of 2009. He was awarded the Nobel Peace Prize in 2010.

13. Goal for some H.S. dropouts : GED
The General Education Diploma (GED) is a substitute for a high school diploma, available perhaps for high school dropouts or students that are home-schooled.

24. De Carlo of “The Munsters” : YVONNE
Yvonne De Carlo was a Canadian-American actress with a string of appearances in Hollywood movies in the forties and fifties. In the sixties she turned to television, playing Lily Munster on the comedy show “The Munsters”.

26. Olive genus : OLEA
Oleum (plural: olea) is the Latin word for “oil”. The term oleum is used for a whole host of pharmaceutical oils extracted from both plant and animal sources. Olea is also a genus of plants, the most famous of which is the olive tree.

30. Its symbol is omega : OHM
The unit of electrical resistance is the ohm (with the symbol omega), named after Georg Simon Ohm, a German physicist. Ohm was the guy who established experimentally that the amount of current flowing through a circuit was directly proportional to the voltage applied (V=IR), a relationship that every school kid knows as Ohm’s Law.

34. Eastern belief : TAOISM
The Chinese character “tao” translates as “path”, but the concept of Tao signifies the true nature of the world.

Fierello La Guardia was the Mayor of New York from 1934 to 1945, racking up three full terms in office. The famous airport that bears his name was built at his urging, stemming from an incident that took place while he was in office. He was taking a TWA flight to “New York” and was outraged when the plane landed at Newark Airport, in the state of New Jersey. He demanded that the flight take off again, and land at a small airport in Brooklyn. A gaggle of press reporters joined him on the short hop and he gave them a story, urging New Yorkers to support the construction of a new commercial airport within the city’s limits. The new airport, in Queens, opened in 1939 as New York Municipal, often called “La Guardia” as a nickname. It was finally officially relabeled as “La Guardia” in 1947.

42. Oil-rich ruler, perhaps : EMIR
In English, “emir” can also be written as “amir” and “ameer” (watch out for those spellings in crosswords!).

49. Dundee who trained Ali : ANGELO
Angelo Dundee was the man in the corner of the ring for Muhammad Ali throughout his career. Dundee also trained actor Russell Crowe for his role in the 2005 movie “Cinderella Man”, and even made a cameo appearance in the film.

50. Gov. Rockefeller : NELSON
Nelson Rockefeller was Governor of New York from 1959 to 1973, and US Vice President from 1974 to 1977 serving under President Ford. He was the grandson of the oil magnate, John D. Rockefeller.

51. Sleeping sickness transmitter : TSETSE
Tswana is a language from South Africa. The Tswana word for “fly” is well known around the world, and that would be “tsetse”.

57. When doubled, a 1997 Jim Carrey movie : LIAR
The full rhyme used by children to deride someone not telling the truth is:

62. Diva’s demand : NOW
“Diva” comes to us from Latin via Italian. “Diva” is the feminine form of “divus” meaning “divine one”. The word is used in Italy to mean goddess or fine lady, and especially is applied to the prima donna in an opera. We often use the term to describe a singer with a big ego.

64. Overseer of N.Y.C. bridges : MTA
The MTA is the Metropolitan Transportation Authority, which has public transportation responsibility in the state of New York (as well as part of Connecticut).