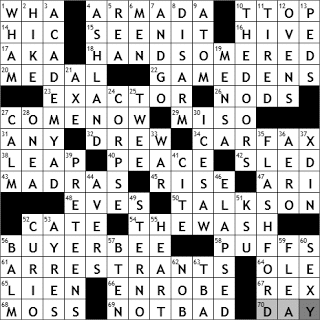 CROSSWORD SETTER: Mike Nothnagel
THEME: There’s No WAR … all the theme answers are common expressions with the letters WAR removed:

4. Fleet : ARMADA
The most famous Armada was the Spanish fleet that sailed against England in order to overthrow Queen Elizabeth I in 1588. It failed in its mission, partly due to bad weather encountered en route. Ironically, the English mounted a similar naval attack against Spain the following year, and it failed as well.

10. Muscle car feature : T-TOP
A T-top is a car roof that has removable panels on either side of a rigid bar that runs down the center of the car above the driver.

14. What this would be to Caesar? : HIC
The Latin word for “this” is either hic (masculine). haec (feminine) or hoc (neuter).

16. Comb container : HIVE
That would be a honeycomb.

18. *Photogenic athlete from Cincinnati? : HANDSOME RED
The Red Scare (anti-communist sentiment) following WWII had such an effect on the populace that it even caused the Cincinnati baseball team to change its name from the Reds. The team was called the Cincinnati Redlegs from 1953-1958, as the management was fearful of losing money due the public distrust of any association with “Reds”.

29. Food made from fermented beans : MISO
Miso is the name of the seasoning that makes the soup. Basic miso seasoning is made by fermenting rice, barley and soybeans with salt and a fungus (!), to produce a paste. The paste can be added to stock to make miso soup, or perhaps to flavor tofu.

34. Company concerned with automobile history : CARFAX
Carfax is a company that supplies the history of a used vehicle to a potential buyer. The information mainly comes from motor vehicle departments, and is available to anyone. Carfax just adds a layer of convenience  by producing a summary report on demand.

43. Indian city now known as Chennai : MADRAS
The government of India has been changing the names of cities since the end of British rule in 1947. Bombay was renamed to Mumbai in 1995, and Madras became Chennai a year later, in 1996.

64. Stadium cheer : OLE
“Ole Ole Ole!” is chanted at soccer games by many Spanish-speaking (or -shouting) fans. I am very proud to claim that the fans of the Irish national team have adopted the chant as their own, and it can be heard practically non-stop when Ireland is playing (with some inventive melody behind it!).

65. Bank holding : LIEN
A lien is the right that one has to retain/secure someone’s property until a debt is paid.

67. Andy’s dinosaur in “Toy Story” : REX
In the excellent film “Toy Story”, Rex is of course a tyrannosaurus, and a pretty clumsy one. He is voiced by actor Wallace Shawn, whose name is perhaps less familiar than his face. He played the neighbor on “The Cosby Show” as well as many, many other supporting roles on TV and the big screen.

Down
2. Shout before a snap : HIKE
The quarterback starts each play in football with a “snap” (also called a “hike”). He announces to his teammates the exact moment of the snap by calling out signals, usually including the word “hut” one or more times in a prearranged sequence.

12. Kitchen window sites? : OVENS
Most ovens have a window in the door these days.

19. Organization that sponsors an annual Mind Games competition : MENSA
If you ever learned Latin, “mensa” was probably taught to you in lesson one as it’s the word commonly used as an example of a first declension noun. Mensa means “table”. The Mensa organization, for folks with high IQs, was set up in Oxford, England back in 1946. To become a member, you have to have an IQ that is in the top 2% of the population.

25. Cutesy, in London : TWEE
In the UK, something “twee” is cutesy or overly nice. “Twee” came from “tweet”, which is the cutesy, baby-talk way of saying “sweet”.

49. Caterer’s supply : STERNO
Sterno is a very useful product, a “jellied alcohol” that usually comes in a can. The can is opened and the contents burn very easily and persistently. The brand name “Sterno” comes from the original manufacturer, S. Sternau & Co. of Brooklyn, New York.

51. The Wildcats of the N.C.A.A. : KSU
The athletic teams of Kansas State University (KSU) are called the Wildcats. The Wildcats official “colors” are just one, Royal Purple. There are very few college teams with just one official color. As well as KSU there is Syracuse (Orange) and Harvard (Crimson).

53. 1948 Best Actor nominee for “Johnny Belinda” : AYRES
Lew Ayres got his big break in “All Quiet On the Western Front”. Famously, he was a pacifist during WWII and served with the Medical Corps. His private life wasn’t too dull. He was married three times, Lola Lane and Ginger Rogers being wives one and two. Lew Ayres was also the man for whom actress Jane Wyman left her husband, Ronald Reagan, although that relationship did not go very far.

57. Classic Army bomber plane : B-TEN
The Martin B-10 bomber entered service in 1934. It was the first bomber to have retractable landing gear, an internal bomb bay and a powered gun turret. It was built for speed and was 50% faster than its predecessor biplane bombers, and at the time of its introduction, the B-10 was so fast it could outpace any fighter in the air.

62. San Francisco’s ___ Hill : NOB
Nob Hill is a very elevated and central location in the city of San Francisco. Because of its views of the surrounding city and environs Nob Hill became a desirable place to live for the wealthy people of the city in the 1800s. The area is still one of San Francisco’s most affluent neighborhoods, and is home to upscale hotels as well as the magnificent Grace Cathedral. The name “Nob Hill” came from the slang term for someone who is well-to-do, a “nob”.