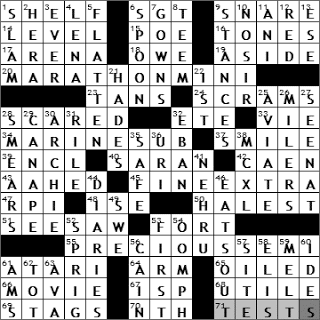 THEME: The First Shall Be Last … each of the theme answers is a common expression with two components, in which the components/words have been reversed i.e. MARATHON MINI (mini-marathon), MARINE SUB (submarine), FINE EXTRA (extra-fine), PRECIOUS SEMI (semiprecious)
COMPLETION TIME: 6m 03s
ANSWERS I MISSED: 0

Across
15. Poet who created the Ushers : POE
“The Fall of the House of Usher” is perhaps the most famous short story by Edgar Allen Poe, first published in 1839. The story is a Gothic tale, an interview with Robert Usher in his house which literally “falls”, breaks into two and is swallowed up by a lake. Some believe that the story was inspired by events at a real Usher House that once stood on Boston’s Lewis Wharf. When the Usher House was torn down, the bodies of a man and woman were found embracing in a cavity in the cellar, a fact reflected in the story as Robert Usher’s sister is supposedly buried alive in the crypt.

One of the most famous mini-marathon’s is the Dublin Women’s Mini Marathon held each June in Ireland’s capital. The 10 km race has been held every year since its inception in 1983 and now attracts over 40,000 participants annually, making it the biggest all-female race in the world.

32. Season after printemps : ETE
In French, spring (printemps) is followed by summer (été).

37. “Candid Camera” request : SMILE
The hidden-camera, prank show called “Candid Camera” was created and produced by Allen Funt, and first aired on television in 1948. The show actually started as “Candid Microphone”, a radio series that was broadcast from 1947 until it was eclipsed by the television version.

40. Clear wrap : SARAN
What’s known as plastic wrap in America, we call cling-film in Ireland. Plastic wrap was one of those unintended inventions, a byproduct of a development program to create a hard plastic cover for cars.

42. Battle of Normandy city : CAEN
Caen, on the River Orne, lies in the Calvados department of France in the northwest of the country. Caen is famous for the WWII Battle of Caen that left the town practically destroyed,. Caen is also the burial place of William the Conqueror, who was also known as William I of England from soon after the Battle of Hastings in 1066 until his death in 1087.

47. Sch. in Troy, N.Y. : RPI
The Rensselaer Polytechnic Institute (RPI) is a private school in Troy, New York. The university is named after its founder Stephen Van Rensselaer who set up the school in 1824. The goal of RPI has always been the “application of science to the common purposes of life”, an objective set by the founder. Given that, an apt name for the sports teams is the Engineers.

48. Sussex suffix : ISE
The American suffix “-ize” is routinely spelled “-ise” in the UK and Ireland.

Sussex is a county in the very southeast of England, lying right on the English Channel. The county of Sussex has about the same boundaries as the ancient Kingdom of Sussex, a Saxon colony that existed for about five hundred years until the Battle of Hastings in 1066. Hastings, a town on the Sussex coast was the site of the first battle of the Norman Conquest of England.

61. Company behind the game Battlezone : ATARI
The kids today probably don’t realize that we had a video game console back in the seventies, and it wasn’t a Nintendo nor a PlayStation. The Atari 2600 game system introduced the idea of separating out computing hardware (the console) from the game code (a cartridge). The same concept persists to this day, although cartridges have been displaced by discs.

65. Applied 3-in-One to : OILED
The brand name “3-In-One-Oil” was originally formulated for use on bicycles, back in 1894. The “3-In-One” name reflects the product’s ability to “clean, lubricate and protect”.

67. Juno or NetZero, for short : ISP
An Internet Service Provider is just what its name indicates, a company that provides its customers with access to the Internet. One way that ISPs differentiate themselves from each other is in the way that the end users are connected to the ISPs network. So, there are cable ISPs, DSL ISPs, dial-up ISPs and satellite ISPs. I’d go with cable if it’s available in your area …

Down
2. Zeus’ wife : HERA
In Greek mythology, Hera was the wife of Zeus and was noted for her jealousy and vengeful nature, particularly against those who vied for the affections of her husband. The equivalent character in Roman mythology was Juno.

4. “Havana” actress Olin : LENA
Lena Olin is a Swedish actress, first discovered by Ingmar Bergman. Her most famous performance was in “Chocolat” from 2000, and she won an Emmy in 2003 for Best Supporting actress in the TV show “Alias”.

6. Dish’s runaway partner, in rhyme : SPOON
The nursery rhyme “Hey Diddle Diddle” has been around at least since the mid-1700s.

Hey diddle diddle,
The cat and the fiddle,
The cow jumped over the moon,
The little dog laughed to see such fun,
And the dish ran away with the Spoon.

10. Boot camp reply : NO SIR
“Boot camp” is US Marine slang that dates back to WWII. “Boot” was a slang term for a recruit that dated back to the Spanish-American War which came from “boots”, the leggings worn by American sailors.

11. Young Skywalker’s nickname : ANI
Anakin Skywalker is actually the principal character in all six of the “Star Wars” movies. His progress chronologically through the series of films is:

– Episode I: Anakin is a 9-year-old slave boy who earns the promise of Jedi training by young Obi-Wan Kenobi.
– Episode II: Anakin is 18-years-old and goes on a murdering rampage to avenge the murder of his mother.
– Episode III: Anakin is 21-years-old and now a Jedi knight, but he turns to the Dark Side and becomes Darth Vader. His wife, Padme, gives birth to twins, Luke and Leia Skywalker.
– Episode IV: Anakin, as Darth Vader comes into conflict with his children, Luke Skywalker and the Princess Leia.
– Episode V: Darth Vader attempts to coax his son, Luke, over to the dark side, and reveals to Luke that he is his father.
– Episode VI: Luke learns that Leia is his sister, and takes on the task of bringing Darth Vader back from the Dark Side in order to save the Galaxy. Vader saves his son from the Emperor’s evil grip, dying in the process, but his spirit ends up alongside the spirits of Yoda and Obi-Wan. And they all live happily ever after …

12. “Curse you, ___ Baron!” : RED
Snoopy, the famous beagle in the “Peanuts” comic strip, has a number of alter-egos and sometimes depicted as a World War I flying ace. Snoopy’s arch-enemy in the air is Manfred von Richtofen, the Red Baron, and Snoopy can often be seen shaking his fist and crying out, “Curse you, Red Baron!”

21. Where the Styx flows : HADES
The River Styx in Greek mythology was the river that formed the boundary between Earth and the Underworld (also called Hades). The souls of the newly dead had to cross the River Styx in a ferryboat piloted by Charon. Traditionally, a coin would be placed in the mouths of the dead “to pay the ferryman”.

26. Four-lap runners, often : MILERS
The distance around a newer running tack is 400 meters, as measured in the inside line. Tracks used to be 440 yards around, so that four laps added up to an even mile (1,760 yards). As race distances changed to meters, the mile race was dropped in favor of the “metric mile”, 1600 meters, equivalent to 1,750 yards or 0.994 miles.

29. Cocktail hour nibble : CANAPE
A canapé is a finger food, usually small enough to eat in just one bite. In French, a canapé is actually a couch or a sofa. The name was given to the snack as the original “canapés” were savories served on toasted or stale bread that supposedly resembled a “couch”.

30. Jughead’s buddy : ARCHIE
Jughead Jones is a character in Archie Comics, who first appeared in print in 1941.

32. Abba of Israel : EBAN
Abba Eban was an Israeli diplomat and politician, born Aubrey Solomon Meir Eban in Cape Town. While working at the United Nations after WWII he changed his name to “Abba”, the Hebrew word for “father”, apparently as he could see himself as the father of the nation of Israel.

36. Mentalist Geller : URI
Uri Geller’s most famous performance is perhaps his uncomfortable failure on “The Tonight Show” with Johnny Carson in 1973. Carson “hi-jacked” Geller on live television by providing him with spoons to bend and watches to start, none of which had been available to Geller before the show aired. Clever!

41. India’s longest-serving P.M. : NEHRU
Jawaharlal Nehru was the very first prime minister of India, serving from 1947-64. Nehru was basically the heir to his mentor, Mahatma Gandhi. Nehru’s only daughter, Indira, also became prime minister (known as Indira Gandhi, she was no relation to Mahatma).

44. Works of Pepys and others : DIARIES
Samuel Pepys was a British Member of Parliament and naval administrator, more famous these days for his diary than for his contribution to political history. Pepys started to keep a diary on New Year’s Day in 1660 and recorded his daily life for almost ten years. His writings include details of his personal life as well as firsthand accounts of the important events of the 1660s such as the Great Plague of 1665 and the Great Fire of London in 1666.

56. Genesis brother : CAIN
The story of Cain and Abel not only appears in the Bible. It also features in the Qur’an, where the brothers are named Kabil and Habil.

58. Yale students : ELIS
Eli is the nickname for a graduate of Yale University, a term used in honor of the Yale benefactor Elihu Yale.

59. Disappear à la Frosty : MELT
“Frosty the Snowman” is a song first recorded by Gene Autry in 1950, basically as a follow up to Autry’s success with “Rudolph the Red-Nosed Reindeer” the previous year. After the song became a hit, it was adapted into book form and a very popular television special.

62. Huggies wearer : TOT
Here’s another word that I had to learn when I moved to America … “diaper”. What are called “diapers” over here we call “nappies” back in Ireland. The term “diaper” is actually the original term that was used in England for the garment, where “diaper” referred to the cloth that was used. The term diaper was brought to the New World where it stuck. Back in Britain, diaper was displaced by the word “nappy”, a diminutive of “napkin”.

63. Gardner of “Mogambo” : AVA
Ava Gardner is noted for her association with some big movies, but also for her association with some big names when it came to the men in her life. In the world of film, she appeared in the likes of “Mogambo” (1953), “On the Beach” (1959), “The Night of the Iguana” (1964) and “Earthquake” (1974). The men in her life included husbands Mickey Rooney, Artie Shaw and Frank Sinatra. After her marriages had failed (and perhaps before!) she had long term relationships with Howard Hughes, as well bullfighter Luis Miguel Dominguin whom she met through her friend Ernest Hemingway.