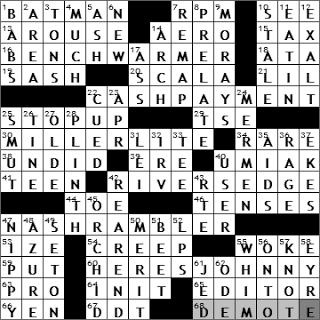 1. Half of the Dynamic Duo : BATMAN
Batman is unique among his superhero compatriots in that he has no special powers, just a whole load of cool gadgets.

7. 33 1/3, e.g., for a record: Abbr. : RPM
The first standard set for rotational speed of gramophone records was 78 rpm, but like so many things it seems, the US version of “78” was slightly different from that for the rest of the world. The US record was designed to play at 78.26 rpm, whereas the standard in the rest of the world was 77.92 rpm. So, imported records played on American equipment didn’t sound quite as they were intended.

Vinyl records designed to play at 33 1/3 rpm were introduced by RCA Victor in 1931, but were discontinued due to quality problems. The first, true, Long Play (LP), 33 1/3 rpm disc was introduced by Columbia Records in 1948, with RCA Victor following up with a 45 rpm “single” the following year, in 1949.

Johnny Bench is a former Major League Baseball catcher, who played for the Cincinnati Reds. Bench is now a spokesman for the Stryker Corporation, makers of medical implants. After a career as a baseball catcher his natural hip joint was in bad shape, so he had very successful replacement surgery in 2004.

19. Window framework : SASH
A movable (up and down) window frame is called a sash, from the French word for a frame, “châssis”.

20. Milan opera house La ___ : SCALA
The La Scala Opera House opened in 1778, built on the site of the church of Santa Maria della Scala, which gave the theater its name.

I must admit I am not a big country music fan, but who isn’t a fan of Johnny Cash? The man had such a unique voice, and indeed unique songs. And I thought that his biopic, “Walk the Line”, was very cool, as is the title song itself. Recorded back in 1956, I find “Walk the Line” to be very, very creative for “popular” music. The basic rhythm of the song emulates the sound of a freight train, the “boom-chicka-boom” sound. Cash’s guitar has a unique tone to it, as it plays this rhythm, achieved by threading a piece of paper between the guitar strings giving the rhythm a bit of a “buzz”. Above the rhythm, each of the five verses is sung in different keys. You can actually hear Cash hum a note signifying the key change at the start of each verse. With all these modulations, the final verse is sung a full octave lower that the first. A remarkable tune …

29. Mao ___-tung : TSE
Mao Zedong was burn on December 16, 1893 in the Hunan Province of China. As he was the son of a peasant farmer, his prospects for education were limited. Indeed he left school at 13 to work on the family farm but did eventually get to secondary school in Changsa, the provincial capital. In the years following he continued his education further in Beijing, and actually turned down an opportunity to study in France.

30. “Great taste … less filling!” sloganeer : MILLER LITE
The first light beer was produced by Chicago’s Meister Brew brewery in the sixties. Miller took over Meister Brau, reformulated the light beer using the same process and became the first of the big breweries to come out with a light beer, “Lite Beer from Miller” introduced in 1973. There really wasn’t a serious competitor to Miller Lite in its niche until Anheuser-Busch finally came up with a process and a product in 1982 … Bud Light.

I saw Johnny Rivers perform for the very first time this summer, at our local county fairgrounds, and a great show he puts on. The big hit for Johnny Rivers was “Secret Agent Man”, a song written especially for the opening title of the British TV show “Danger Man” when it was broadcast over here in America in the sixties (remember that one, starring Patrick McGoohan?).

The Nash Rambler is credited with establishing a new segment in the North American auto market, and is usually cited as the first successful American compact car.

Singer Johnny Nash’s big hit is the great song “I Can See Clearly Now” from 1972.

54. Someone who gives you the willies : CREEP
A “fit of the willies” is a spell of nervousness. The expression is probably a derivative of “the woollies”, a colloquial expression for “nervous” likely to be a reference to itchiness caused by wool garments.

60. Classic TV intro … or a hint to the starts of 16-, 22-, 30-, 42- and 47-Across : HERE’S JOHNNY
One the most famous catchphrases in the history of American television has to be “Here’s Johnny”, proclaimed by Ed McMahon at the beginning of each episode of “The Tonight Show Starring Johnny Carson”. McMahon started using “Heeeeeere’s Johnny!” in the very first show back in 1962, and he made the same announcement about 4,500 times until the show went off the air in 1992.

66. Hankering : YEN
The word “yen”, meaning “urge”, has been around in English since the very early 1900s. It comes from the earlier word “yin” imported from Chinese, which was used in English to describe an intense craving for opium!

67. Banned insecticide, for short : DDT
DDT is dicholorodiphenyltricholoroethane (don’t forget now!). It was used with great success to control disease-carrying insects during WWII, and when made available for use after the war it became by far the most popular pesticide. And then Rachel Carson published her famous book “Silent Spring”, suggesting there was a link between DDT and diminishing populations of certain wildlife. It was the public outcry sparked by the book and reports of links between DDT and cancer, that led to the ban on the use of DDT in 1972. That ban is touted as the main reason that the bald eagle was rescued from near extinction.

Down
1. Nickname for Barbara : BABS
Babs is a nickname for people with the name Barbara, although my grandmother back in Ireland had the nickname of Babs, and her name was Margaret!

2. Environs : AREA
“Environ” is the French word for “round” or “round about”.

5. ___ Wednesday : ASH
In the Christian tradition the first day of Lent is called Ash Wednesday. The tradition is that the Palm Crosses from the prior year’s Palm Sunday are burned. The resulting ashes are mixed with sacred oil and then used to anoint worshipers on the forehead with the shape of a cross.

8. Church dignitary : PRELATE
A prelate is a high-ranking clergy member. Prelate comes from the Latin word “praelatus” meaning “to set above”, so a prelate is one who is set above others.

9. Some eels : MORAYS
Morays are a larger group of about 200 species of eels found across the world’s oceans. They are carnivorous and look pretty scary but they’re quite shy when confronted and present no threat to humans. One interesting thing about morays is that they will sometimes work in cooperation with the grouper fish found in reefs, the two helping each other hunt for food.

23. Easter mo., often : APR
In the Christian tradition, Easter is celebrated on the first Sunday after the full moon following the northern hemisphere’s vernal equinox. This means that it can fall on any Sunday between March 22 and April 25.

24. Fish-tailed males : MERMEN
A merman is a the male equivalent of mermaid. The most famous merman was probably Triton, the son of Poseidon.

27. Merrie ___ England : OLDE
The word “olde” wasn’t actually used much earlier than the 1920s. “Olde” was introduced to give a quaint, antique feel to brand names, shop names etc.

28. Base of a column : PLINTH
A plinth is a block on which a column is based. The Greek word “plinthos” means “squared stone”.

31. Hawaiian garland : LEI
“Lei” is the Hawaiian word for “garland, wreath”, although in more general terms a “lei” is any series of objects strung together to be worn.

36. Fulminate : RAGE
To “fulminate” is to explode or detonate, perhaps in rage. It’s a lovely word derived from the Latin “fulminare” meaning “to hurl lightning”.

37. Barely manages, with “out” : EKES
I believe that technically speaking one can’t actually “eke out” an existence, as to “eke out” means to “make something go further or last longer”. So, you can eke out your income by cutting back on expenses, but you can’t eke out your existence, or any existence.

47. A bit cold : NIPPY
Something cold might be described as “nippy”, having a “biting” chill.

48. Sky-blue : AZURE
The word “azure” came in to English from Persian via Old French. The French word “l’azur” was taken from the Persian name for a place in northeastern Afghanistan called “Lazheward” which was the main source of the semi-precious stone lapis lazuli. The stone has a vivid blue color, and “azure” has been describing this color since the 14th century.

55. Capricious desire : WHIM
Something “capricious” is impulsive or unpredictable. It comes into English from the Italian “capriccio” meaning “sudden start or motion”, which in itself is from the Latin “capreolus” meaning “wild goat”.

58. Brontë’s “Jane ___” : EYRE
“Jane Eyre” is of course the novel written by Charlotte Bronte, and published as “Jane Eyre. An Autobiography” under the pen name Currer Bell. The storyline is a little too dark and Gothic for my taste …

61. ___ Bartlet, president on “The West Wing” : JED
“The West Wing”, when it was being written by Aaron Sorkin, was such a fabulous television event. It is remarkable how quickly it went downhill after Sorkin moved on. He is also famous for having written the play “A Few Good Men”, and one of my favorite screenplay;s “Charlie Wilson’s War”.