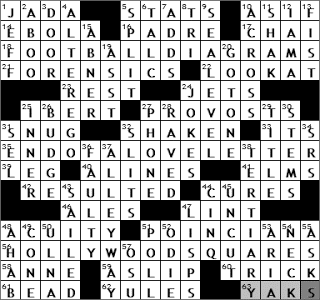 THEME: Where to see X’s and O’s … all the theme answers are just that i.e FOOTBALL DIAGRAMS, END OF A LOVE LETTER, HOLLYWOOD SQUARES
COMPLETION TIME: N/A (watching the Indy movie “The Safety of Objects

1. Actress ___ Pinkett Smith : JADA
Jada Pinkett Smith is an actress and singer/songwriter. She has appeared in such films as “The Matrix”, “Ali” and “Scream 2”. She moved into the world of music in 2007 when she helped put together the rock band Wicked Wisdom. In 1990 she auditioned for the part of Will Smith’s girlfriend in “The Fresh Prince of Bel-Air”. She didn’t get the role in front of the camera, but five years later she starting dating Smith in real life. The two were married in 1997 and have two children together.

14. Virus named for a river : EBOLA
The Ebola viru

s causes a very nasty form of hemorrhagic fever. The name comes from the site of the first known outbreak of the disease, in a mission hospital in the Ebola River Valley in the Democratic Republic of the Congo.

16. Texas’ South ___ Island : PADRE
South Padre Island is a town located off the Gulf Coast of Texas. The town and island take their name from a Catholic priest, Padre Balli, who settled there.

is a drink made from spiced black tea, honey and milk. “Chai” is the Hindi word for “tea”. We often called tea “a cup of char” growing up, with “char” being the slang word for tea derived from “chai”.

18. Where to see X’s and O’s : FOOTBALL DIAGRAMS
Football coaches use field diagrams, with lots of X’s and O’s on them apparently. Not my sport!

21. “CSI” field : FORENSICS
Forensics is the use of science and technology to investigate facts for presentation in a court of law.

” gets a lot of criticism from the law enforcement agencies for its unrealistic portrayal of the procedures and science of criminal investigation. I don’t care though. It’s a fun show to watch.

23. Balance : REST
The balance is the rest that’s left.

25. “Angélique” composer : IBERT
Jacques Ibert was a French composer of 20th century classical music. He also wrote some film scores, including one for Orson Welles’ “Macbeth” (1948). “Angélique” is a comic opera that he wrote in 1929.

27. College bigwigs : PROVOSTS
A provost is a high-ranking administrator of a university. A provost can also be the keeper of a prison! But students probably know that already …

31. Comfy-cozy : SNUG
“Snug” was originally a nautical term, used at the end of the 16th century to describe a ship that was compact and trim. By the early 17th century, “snug” was being used in the sense of “in a state of comfort”, as we use it today.

32. Like 007’s martinis : SHAKEN
Why have a vodka martini shaken and not stirred (as does James Bond, 007)? Well, for one thing the shaken drink tends to be colder. And with more melted ice in the drink, it isn’t as strong. These are my personal observations … no need to write in …

35. Where to see X’s and O’s : END OF A LOVE-LETTER
In the sequence XOXO, I think the X represents a kiss, and the O a hug. Hugs and kisses …

40. Flaring garb : A-LINES
Christian Dior introduced the term A-Line to the world of fashion with his 1955 collection. Prior to this, he described his pencil skirts as “H-Line”.

48. Sharpness : ACUITY
Acuity, meaning “sharpness”, is such a lovely word. It stems from the Latin “acus”, the word for “needle”.

51. Bing Crosby hit in which “your branches speak to me of love” : POINCIANA
“Poinciana

” is subtitled “Song of the Tree”. It was released by Bing Crosby in 1943 and made it to number 3 in the charts that year. The tree called Royal Poinciana is an ornamental, and is named after Phillippe de Longvilliers de Poincy, who apparently brought it to the Americas. It is native to Madagascar, off the southeastern coast of Africa.

56. Where to see X’s and O’s : HOLLYWOOD SQUARES
“Hollywood Squares” was first aired, in glorious black and white, in 1965.

58. Rice on a shelf : ANNE
What a cleverly worded clue … an Anne Rice book might be on your bookshelf.

59. “There’s many ___ ‘twixt …” : A SLIP
“There’s many a slip ‘twixt the cup and the lip” is an Old English proverb. The proverb apparently comes from a Greek legend concerning one of the Argonauts. A soothsayer had predicted that a winemaker, as he headed off on the Argo, would not taste another drop of his wine before his death. The Argonaut survived the expedition, returned to his winery, and was celebrating the fact that he had cheated death by toasting the soothsayer. The soothsayer remarks, “There’s many a slip ‘twixt the cup and the lip”.Before the winemaker can drink, he is called away on a wild boar hunt and sure enough, the Argonaut gets killed on the hunt.

60. Halloween option : TRICK
The name “Halloween” is a Scottish variant of the more complete name “All Hallows Eve”.  That’s the night before All Hallows Day, more commonly known today as All Saints’ Day (November 1st).

62. Year-end celebrations : YULES
“Yule” celebrations coincide with Christmas, and the words have become synonymous in much of the world. However, Yule was originally a pagan festival celebrated by Germanic peoples. The name “yule” comes from the Old Norse word “jol” that was used to describe the festival.

63. Tibetan herd : YAKS
The English word “yak” is an Anglicized version of the Tibetan name for the male of the species. Yak milk is much prized in the Tibetan culture. It is made into cheese and butter, and the butter is used to make a tea that is consumed by the gallon in Tibetan. The butter is also used as a fuel in lamps, and during festivals the butter can be sculpted into religious icons.

1. One of the acting Bridges : JEFF
The first major role for Jeff Bridges was in the wonderful 1971 movie, “The Last Picture Show”. My favorite Bridges movie though is 1984’s “Starman” in which he played a very charming alien opposite Karen Allen. As an amateur photographer myself, I also appreciate Jeff Bridges work as a photographer, and own his book of fabulous images called “Pictures: Photographs by Jeff Bridges

5. Alley oops? : SPLIT
One might say “oops” at a bowling alley if one leaves two pins standing in a split.

is composed of loose talc, although these days “baby powder” can also be corn starch.

9. It’s affected by global warming : SEA LEVEL
Over the past century, sea levels have been rising at an average rate of 1.8 mm per year. However, things are accelerating, so in recent years the rate is more like 2.8 – 3.1 mm per year. The water level rises with temperature due to water expansion, and due to melting of glaciers and ice caps.

10. Not this way : ACROSS
This clue is a down clue, not across. Clever!

” is a famous reference work containing tons of quotations. Bartlett’s was first issued in 1855, and as such is the longest-lived collection of quotations that we have available to us. The book started as a private list of quotes gathered by John Bartlett who ran the University Book Store in Cambridge, Massachusetts. He kept the list as he was always being asked “who said?” by customers.

Oh, and there’s a lot of Shakespeare quoted in Bartlett’s.

” is a 2007 book by American academic Douglas Hofstadter. It sounds like heavy material …

15. Capp lad : ABNER
“Li’l Abner” was created and drawn by Al Capp for over 43 years starting in 1934. Al Capp stopped producing the strip in 1977, largely due to illness (he died from emphysema two years later). As the strip finished up, he went so far as to apologize to his long standing fans, saying that he should have stopped 3-4 years earlier as he felt like the quality of his work had gone down in those recent years.

24. Routine material : JOKES
Jokes are part of a comedy routine.

34. Ones with rings: Abbr. : SRS
Seniors often have class rings.

38. Period of the Cenozoic Era : TERTIARY
The Tertiary was the geologic period 65 million to 1.8 million years ago. The Tertiary started with the disappearance of the dinosaurs, and ended with beginning of the latest Ice Age.

first appeared on the screen in “Porky’s Duck Hunt” in 1937. In the original cartoon, Daffy was just meant to have a small role, but he was a big hit as he had so much sass. Even back then, Daffy was voiced by the ubiquitous Mel Blanc.

48. Captain with a “regal overbearing dignity of some mighty woe” : AHAB
Captain Ahab is the obsessed and far from friendly Captain of the Pequod in Herman Melville’s “Moby Dick”.

(whose family home I visited recently) mined his own experiences for his most famous novel, “Moby Dick”. Melville sailed from New Bedford, Massachusetts in 1841 on a whaler heading into the Pacific Ocean (a source for “Moby Dick”). Melville ended up deserting his ship 18 months later, and lived with natives (actually cannibals) on a South Pacific Island for three weeks (a source for “Typee”). He picked up another whaler and headed for Hawaii, where he joined the crew of a US navy frigate headed for Boston (a source for “Omoo”).

50. Arm part : ULNA
The radius and ulna are bones in the forearm.

57. Nebraska rival, for short : OSU
I think the rivalry here is the Big Ten football rivalry between Nebraska and Ohio State University, but I could be wrong …
UPDATE: And I was wrong (show’s you how much I know about American sports!). I’ve been informed that Nebraska isn’t in the Big Ten, and the rivalry is with Oklahoma State! I hope ye don’t think less of me …