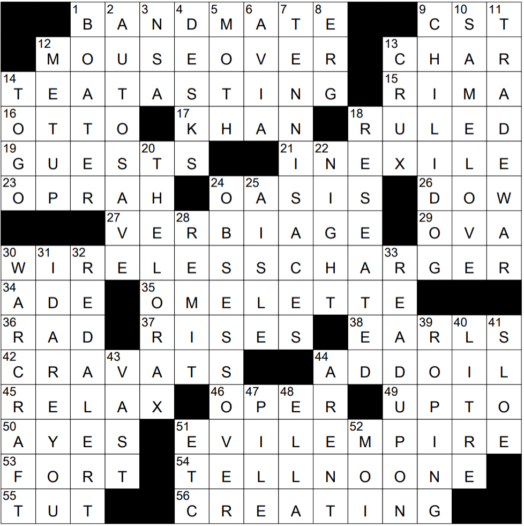 Constructed by: Matthew Stock & Sid Sivakumar
Edited by: Will Shortz

The city of St. Louis, Missouri was settled by French explorers in 1763. Sitting on the Mississippi River, it grew into a very busy port. By the 1850s, it was the second busiest port in the country, with only New York moving more freight. St. Louis was named for Louis IX of France. Louis was canonized in 1297 by Pope Boniface VIII, and was the only French king to be declared a saint.

14 Where to try out some gunpowder? : TEA TASTING

Gunpowder tea is a mainly Chinese green tea in which the leaves are rolled into small pellets. Apparently the resulting grains of tea resemble black powder, giving the name “gunpowder tea”. There is also a variety known as Formosa gunpowder grown in Taiwan, and a Ceylon gunpowder grown in Sri Lanka.

“Rima” is Italian for “rhyme”.

23 Author of “What I Know for Sure,” familiarly : OPRAH

24 Place of rest away from everything : OASIS

27 What purple prose and technical jargon have in common : VERBIAGE

1 Headwear for many a barbershop quartet singer : BOATER

A boater is a straw hat often associated with boating, hence the name.

Barbershop music is played in the a cappella style, meaning that it is unaccompanied vocal music. Barbershop music originated in the African-American communities in the South, as gospel quartets often gathered in neighborhood barber shops to sing together.

3 Org. whose initials are found in “unsafe,” ironically : NSA

7 Osaka and others : TENNIS ACES

DoorDash is the largest food delivery company in the country. Customers can order food from many different restaurants using the DoorDash app, and a DoorDash driver delivers it to a home or office. DoorDash also operates ghost kitchens, facilities that prepare meals for delivery customers of a group of restaurants.

20 Once-ler’s opponent in a Dr. Seuss book : THE LORAX

Barrel racing is an event featured in rodeos. Competitors on horses race around barrels in a cloverleaf pattern, each trying to complete the course in the fastest time. The event tends to be confined to male and female youths, and to women riders.

“Ella Enchanted” is a fantasy novel written by Gail Carson Levine, and published in 1997. It is a retelling of the story of Cinderella, with lots of mythical creatures added. A film adaptation was released in 2004 that features Anne Hathaway in the title role.