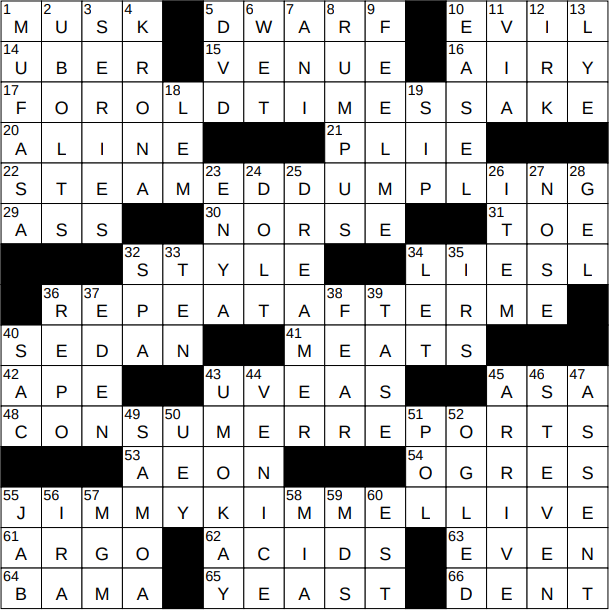 Constructed by: Jay Kaskel & Daniel Kantor
Edited by: Will Shortz

Themed answers each include the letter string “ME”, and AFTER it comes a REPEATED letter. Those repeated letters start and end words:

34 Eldest von Trapp child in “The Sound of Music” : LIESL

Asa Hutchinson is a Republican politician who took over as Governor of Arkansas in January of 2015. Hutchinson comes from a politically active family. Asa’s older brother Tim served a term as US Senator for Arkansas from 1997 to 2003. Tim’s identical twin sons were the first twins to serve alongside each other in the Arkansas General Assembly.

“Consumer Reports” is a monthly magazine that has been published by Consumers Union since 1936. Consumers Union was established as a non-profit organization with the mission to “test products, inform the public, and protect customers.”

Jimmy Kimmel is the host of the late-night talk show “Jimmy Kimmel Live!” Kimmel also co-hosted “The Man Show” and my personal favorite, “Win Ben Stein’s Money”. Kimmel appeared on the PBS show “Finding Your Roots” in 2020, when he discovered that he was a cousin of Martha Stewart!

64 Another name for the Crimson Tide : BAMA

Matzo is an unleavened flatbread used in Jewish cuisine, and which plays a central role in the Seder ritual feast that marks the beginning of Passover.

“Krona” (plural “kronor”) translates in English as “crown”, and is the currency of Sweden. As a member of the European Union, Sweden is required to adopt the euro as its official currency. Such a move isn’t really popular in Sweden and so the Swedish government has been using a legal loophole to allow the country to retain the krona.

That could be tennis.