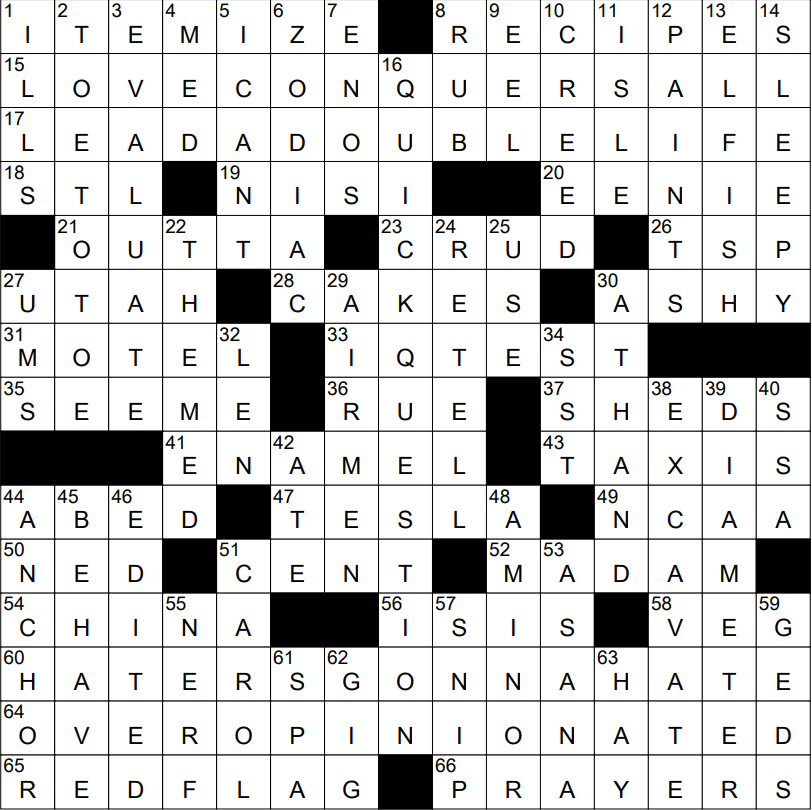 The Latin “recipere” means “to take”, and the imperative form “recipe” was written at the top of medical prescriptions as an instruction, i.e. “take (the following)”. This use of “recipe” evolved into the instruction for preparing a dish of food in the mid-1700s.

A decree nisi is a court order, one that only comes into force when certain specified conditions are met. At the point where the conditions are met, it becomes a decree absolute and is binding. “Nisi” is Latin for “unless”.

We’ve been using “fiddlesticks” to mean “nonsense” since the early 17th century. Prior to that time, “fiddlestick” referred to the bow of a fiddle.

27 Where to see license plates that say “Greatest Snow on Earth” : UTAH

The first city to introduce license plates for cars was Paris, 1893. The first national plates were introduced by the Netherlands, in 1898. The first US plates were issued by Massachusetts in 1903, although New York State had required an owner’s initials to be displayed on the back of the vehicle since 1901.

31 Alternative to an autocamp : MOTEL

The term “motel” is a portmanteau of “motor” and “hotel”.

The outer layer of our teeth is made from enamel. It covers the dentin layer, which supports the enamel.

49 Org. that was the subject of a 2021 Supreme Court antitrust ruling : NCAA

According to Greek mythology, Pandora was the first woman. She was created by the gods, with each god bestowing on her a gift. Her name can be translated from Greek as “all-gifted”. Pandora is famous for the story of “Pandora’s Box”. The story should be about Pandora’s “Jar”,as a 16th-century error in translation created a “box” out of the “jar”. In the story of Pandora’s Box, curiosity got the better of her and she opened up a box she was meant to leave alone. As a result she released all the evils of mankind, just closing it in time to trap hope inside.

In astronomical terms, the zodiac is a group of 13 constellations that together form a roughly circular pattern in the night sky. Most of these constellations are named for animals, which explains why the word “zodiac” comes from the Greek “zodiakos” meaning “circle of little animals”. We can’t see the whole Zodiac at any one time in the year, but one constellation does dominate the sky every four weeks. In astrological terms, there are only 12 signs of the zodiac. Astrologists skip the constellation Ophiuchus (visible November/December). Ophiuchus is the serpent bearer.

7 Nephew of Cain and Abel : ENOS

The phrase “To sleep — perchance to dream” comes from Hamlet’s famous “To be or not to be” soliloquy:

A rub is a difficulty or obstruction. The usage of the term “rub” predates Shakespeare, and comes from the game of lawn bowls in which a rub is a fault in the bowling surface.

10 Something to believe in : CREED

A flying ace (also “air ace”) is an aviator who has shot down a number of enemy planes during combat. The qualifying number of kills seems to vary, but five is common. The first use of “ace” was during WWI, when the French newspapers dubbed pilot Adolphe Pegoud “l’as” (French for “the ace”) when he shot down his fifth German plane.

59 What some dropouts go on to get, in brief : GEDS