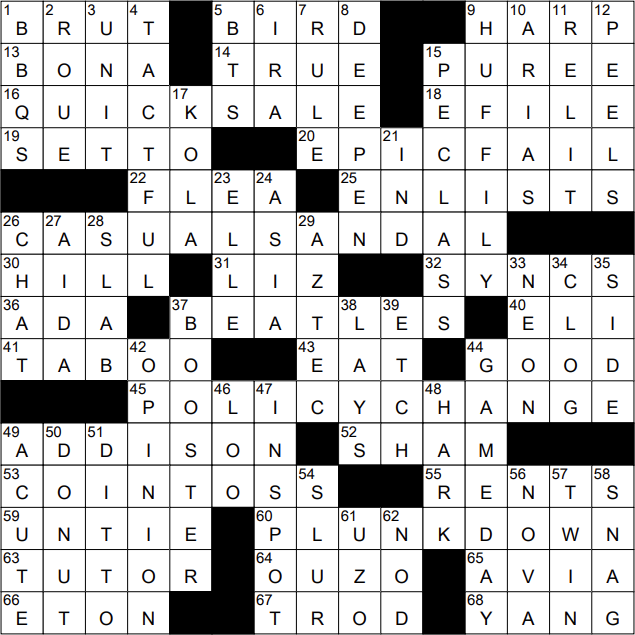 Today’s Theme (according to Bill): Flips and Flops

1 Quite dry, but sparkling? : BRUT

The prestigious Carnegie Hall in midtown Manhattan opened for business in 1891. The magnificent edifice was named after the philanthropist Andrew Carnegie, who provided the funds for construction.

40 One of the Manning brothers : ELI

Philanthropy is a concern for human welfare, and the act of donating to persons or groups who support such concerns. The term “philanthropy” derives from the Greek “phil-” meaning “loving”, and “anthropos” meaning “mankind”.

Actress Kate Walsh is probably best known for playing Dr. Addison Montgomery on “Grey’s Anatomy”, and then leading the cast on the spin-off show “Private Practice”.

9 With a chip on one’s shoulder : HUFFILY

A mule is a shoe without a back and usually with a closed toe. The original mule was a shoe worn by the highest magistrates in ancient Rome.

Immunization is the process used to boost an individual’s immune system making it less likely to succumb to a particular disease. Before we learned to intervene, the immune system was bolstered only by contracting the disease and surviving it. Inoculation was developed specifically for the prevention of smallpox, and involves the introduction of small samples of diseased tissue into the body resulting in a mild case of the disease, and significant boost to the immune system. The related process of vaccination involves the introduction of a benign form of the microorganism or virus into the body so that a boost to the immune system can occur without catching the disease itself.

Lay’s potato chips were introduced in 1938 by Herman W. Lay. Lay started selling his chips out the trunk of his car, traveling all over the US. In those days the chips were pretty much handmade, but Lay put an end to that in 1942. He invented the first continuous potato processor in 1948, and chips started to take over the world!

The word “ditto” was originally used in Italian (from Tuscan dialect) to avoid repetition of the names of months in a series of dates. So, “ditto” is just another wonderful import from that lovely land …

54 Curved line over a series of notes, in sheet music : SLUR