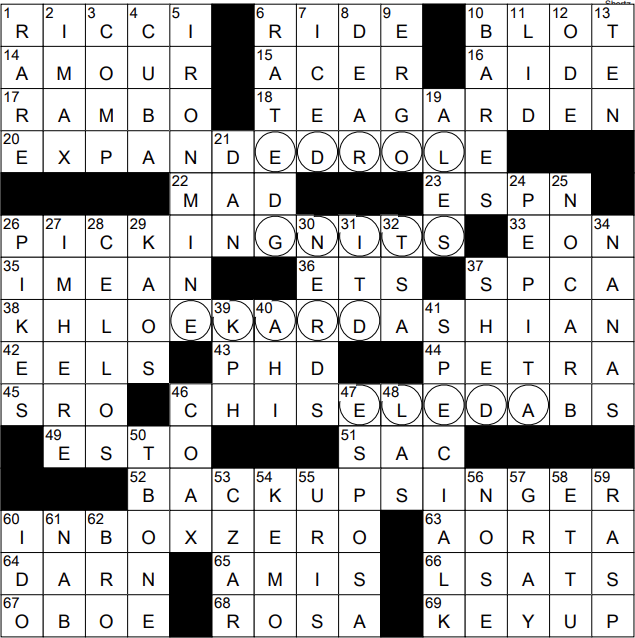 Constructed by: John Ewbank & Jeff Chen
Edited by: Will Shortz

Themed answers each include the name of a SINGER BACKED UP, in the reverse direction:

There are several sports shows on ESPN called “College GameDay”, the oldest of which is the one covering college football.

“Sting” is the stage name used by Gordon Sumner, who came to fame initially as the lead singer for the Police. Off stage, Sting is an avid chess player, and he once participated in an exhibition game with chess grandmaster Garry Kasparov.

Khloé Kardashian, sister of Kim, managed to parlay her exposure on the reality show “Keeping Up with the Kardashians” into spin-offs called “Kourtney and Khloé Take Miami” and “Khloé & Lamar”.

44 Jordanian landmark described as “a rose-red city half as old as time” : PETRA

The archaeological city of Petra in Jordan sounds like a fabulous sight, and is known for its beautiful buildings that have been carved out of the natural rock. Petra is Jordan’s most visited tourist attraction.

“Adele” is the stage name of English singer Adele Adkins. Adele’s debut album is “19”, named after the age she was during the album’s production. Her second album was even more successful than the first. Called “21”, the second album was released three years after the first, when Adele was three years older. Her third studio album “25”, released in 2015, broke the first-week sales records in both the UK and the US. “30” followed in 2021.

Kingsley Amis (what a great name!) was a very successful English writer, famous for producing entertaining, comedic novels. His most famous novel is probably his first, “Lucky Jim” published in 1954. That said, he won a Booker Prize for a later novel, “The Old Devils” published in 1986. He passed on some of his talent through his genes, it seems, as his son Martin Amis is a very successful novelist too.

In general terms, workers’ compensation is a form of insurance that pays out in the event that a worker gets injured in the course of employment.

4 Havana is its capital : CUBA

5 Excavation site for a steelmaker : IRON MINE

6 Suitable for all ages, as a movie : RATED G

Dan Marino played his entire professional football career with the Miami Dolphins. He is widely regarded as one of the game’s greatest quarterbacks, even though he never played on a team that won the Super Bowl.

24 Pumpkin seed, by another name : PEPITA

25 Like diets that cut out bread and pasta : NO-CARB

29 Evil organization on “Get Smart” : KAOS

The satirical comedy series called “Get Smart” was the creation of Mel Brooks and Buck Henry, and starred Don Adams as Agent 86, Maxwell Smart. Agent 86 worked for the spy agency CONTROL, alongside the lovely Agent 99 (played by Barbara Feldon). CONTROL’s sworn enemy was the criminal organization called KAOS. Smart’s shoe phone was a hilarious prop used in almost every episode. When Smart dialed the number 117, the shoe converted into a gun. Cool stuff …

Back in the 1800s, the Las Vegas Valley was given its name from the extensive meadows (“las vegas” is Spanish for “the meadows”) present in the area courtesy of the artesian wells drilled by local farmers. Las Vegas was incorporated as a city in 1905, in the days when it was a stopping-off point for pioneers traveling west. It eventually became a railroad town, although with the coming of the railroad growth halted as travelers began to bypass Las Vegas. The city’s tourism industry took off in 1935 with the completion of the nearby Hoover Dam, which is still a popular attraction. Then gambling was legalized, and things really started to move. Vegas was picked, largely by celebrated figures in “the mob”, as a convenient location across the California/Nevada state line that could service the vast population of Los Angeles. As a result, Las Vegas is the most populous US city founded in the 20th century (Chicago is the most populous city founded in the 19th century, just in case you were wondering).

A carpenter is a woodworker. “Carpenter” came into English via French from the Latin “carpentarius” meaning “wagon maker”. The earlier “carpentum” is Latin for “wagon”.