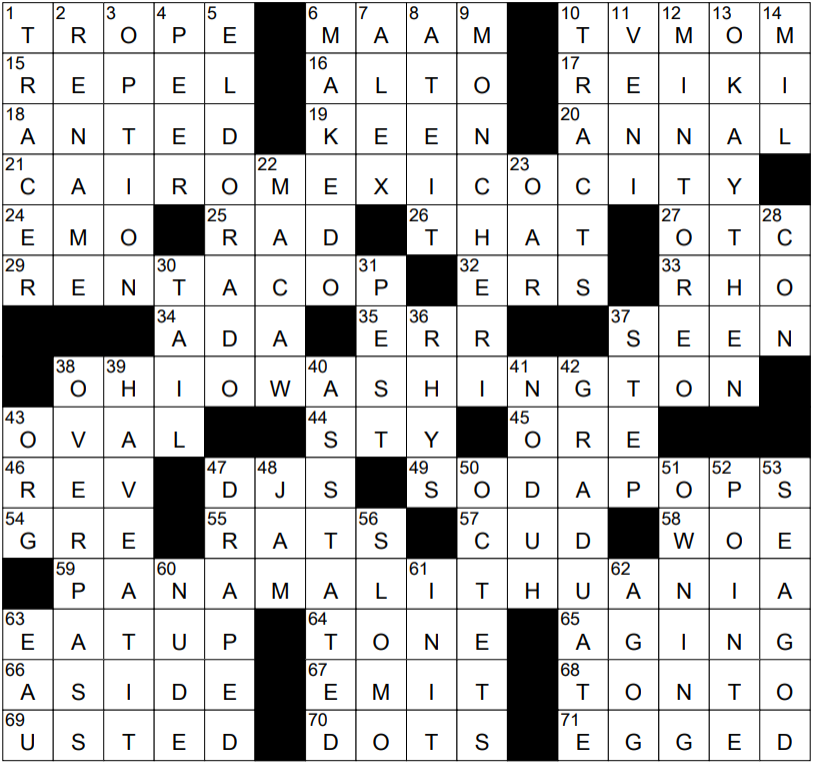 Constructed by: Dylan Schiff
Edited by: Will Shortz

Themed answers are three places with names with overlapping letters:

1 The girl next door, for one : TROPE

A trope is a figure of speech. The term “trope” comes from the Greek word “tropos” that has the same meaning.

Refrigerator magnets … I can’t stand them! But, there is something interesting about their structure. If we place two fridge magnets back to back, and slide them slowly against each other, then we can feel an alternating attraction and repulsion. This is because they are manufactured with alternating north and south poles on the back side, and do not have two distinct poles. Who knew …?!

16 One joining in the chorus : ALTO

The Japanese practice of hands-on healing called “Reiki” was developed by Mikao Usui in 1922. “Reiki” is a Japanese term meaning “universal energy”. Practitioners of Reiki believe that they are transferring this universal energy through the palms of the hand into the patient’s body.

Mexico City is the capital of Mexico, and the most populous city in North America. It is also the oldest city in all the Americas, having been founded in 1325 as Tenochtitlan.

“Rent-a-cop” is a derogatory term for a security guard. The phrase was used in 1988 as the title for a much-panned comedy-action film starring Burt Reynolds and Liza Minnelli. Minnelli was named Worst Actress at the 1988 Golden Raspberry Awards for her performance in “Rent-A-Cop”, and also for “Arthur 2: On the Rocks” that came out the same year.

Rho is the Greek letter that looks just like our Roman letter “p”, although it is equivalent to the Roman letter R. It is the 17th letter in the Greek alphabet.

Additionally, Virginia-born Henry Harrison lived most of his life in Ohio, and indeed is buried there.

Washington has been nicknamed the Evergreen State since 1890, when the moniker was proposed by journalist turned real estate tycoon Charles Tallmadge Conover. The nickname has never been adopted officially, although it does appear on Washington state license plates. The name is a reference to the abundance of evergreen trees in the state’s forests.

Animals that chew the cud are called ruminants. Ruminants eat vegetable matter but cannot extract any nutritional value from cellulose without the help of microbes in the gut. Ruminants collect roughage in the first part of the alimentary canal, allowing microbes to work on it. The partially digested material (the cud) is regurgitated into the mouth so that the ruminant can chew the food more completely, exposing more surface area for microbes to do their work.

The nation that we now know as Panama sits on an isthmus that formed about 3 million years ago. The isthmus was the result of a land bridge forming between North and South America as two tectonic plates of the Earth’s crust slowly collided. Man first attempted to create a waterway across the Isthmus of Panama in 1881, but the 48-mile long Panama Canal only opened for business in 1914.

68 Role once played on TV by Jay Silverheels : TONTO

A jury is a group of people who have sworn to render a verdict. The term “jury” comes into English via French, ultimately from the Latin “iurare” meaning “to swear”.

Sir Walter Raleigh was an adventurer in the court of Queen Elizabeth I of England who is famous for popularizing tobacco-smoking in Europe. Here in the US, North Carolina’s state capital Raleigh was named after him. Walter Raleigh is not very popular in Ireland as he spent many years there after crushing a rebellion, living on thousands of acres awarded by the Crown. It was in Ireland that he was famously doused by a servant who saw smoke emanating from his master as he enjoyed a pipe of tobacco.

Alex Trebek was the host of “Jeopardy!” from the launch of the syndicated version of the game show in 1984 until his passing in 2020. Trebek missed just one episode during that time, when he and host of “Wheel of Fortune” Pat Sajak swapped roles in 1997 as an April Fool’s joke. In 2014, Trebek picked up the Guinness World Record for hosting the most episodes of a game show.

23 Something a coxswain lacks : OAR

38 Part of a highway cloverleaf : OVERPASS

Today there are six official languages of the United Nations:

Given that Neptune was the Roman god of the freshwater and the sea, the moons of the planet Neptune are all named with reference to water. For example, the largest moon is Triton, named for the Greek sea god and son of Poseidon. The innermost moon is Naiad, named for the female water spirits of Greek mythology.

A monogram is a design with two or more letters intertwined or combined in some way to make a single symbol. The term “monogram” comes from the Greek “mono” meaning “single” and “gramma” meaning “letter”.