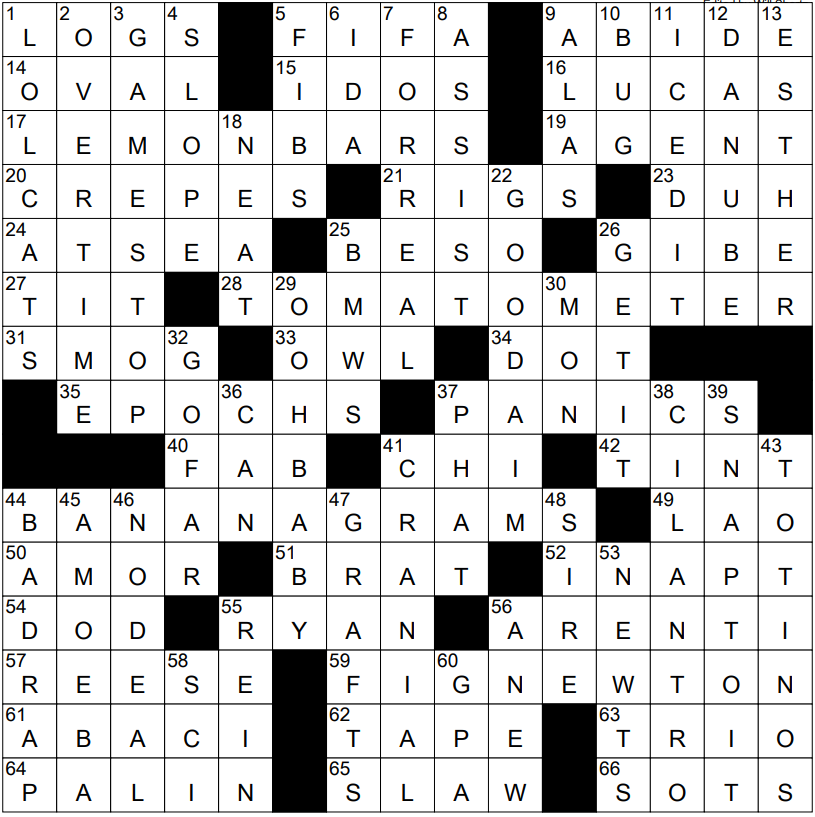 Themed answers each start with a fruit, and end with a unit that measures something cited in the clue:

16 He sold his namesake company to Disney for over $4 billion : LUCAS

31 Atmospheric condition that can be caused by wildfires : SMOG

There are three dots in the word “Fiji”, over the letters “i” and “j”.

44 Scrabble relative played without a board [mass] : BANANAGRAMS

Vientiane is the capital city of Laos, and is situated on the Mekong River. The city was originally called the “city of sandalwood” by Buddhist monks, naming it after the valued trees that grew in the area. The French took the Pali words for “city of sandalwood” and rewrote it as the French-sounding “Vientiane”.

61 People have counted on them for centuries : ABACI

Michael Palin is a marvelously talented comedian and actor, most famous as one of the “Monty Python” team. Palin is well known as a travel writer and has made some outstanding travel documentaries for television. He did one show called “Michael Palin: Around the World in 80 Days” in which he followed the route called out in the Jules Verne classic, without using airplanes. Palin also made “Pole to Pole”, a journey from the North to South Poles, along the 30 degree line of longitude. Currently, Michael Palin was the President of the Royal Geographical Society for several years.

65 Side dish whose name comes from the Dutch for “salad” : SLAW

1 Memes with captions like “I can has cheezburger?” : LOLCATS

10 Issue for a programmer : BUG

The Danube is the second largest river in Europe (after the Volga). It flows through four European capitals (Vienna, Budapest, Belgrade and Bratislava).

We have seven days in a week because there are seven classical planets in the Solar System. The days were named for these “planets” during the Roman era:

38 Herb that tastes soapy to some : CILANTRO

What we know here in North America as cilantro is called coriander in the UK and other parts of the world. “Cilantro” is the Spanish name for the herb.

53 Some members of the family Salamandridae : NEWTS