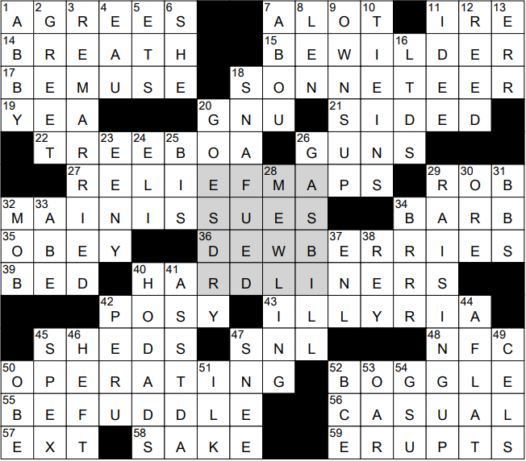 Themed answers all have the same clue, namely “FLUMMOX”. The center of the grid forms a 16-letter square grid. Such a grid can be found in a game of BOGGLE. The themed answers BEWILDER, BEMUSE and BEFUDDLE can be spelled out using letters in the central BOGGLE grid. Clever …

20 Grazer with a bushy beard : GNU

The name “Laser Tag” is really a misnomer as lasers are rarely used in the game. The “guns” actually send out infrared light, and not laser light, that is picked up by infrared detectors worn by the players.

Dewberries are trailing brambles related to blackberries. The dewberries fruit is soft when ripe, and tends to stain the fingers as it is picked. The stems are also covered with fine spines, so picking is often a frustrating, and “fruitless”, endeavor!

The Illyrians were a coalition of tribes that lived in the western part of the Balkan Peninsula. The Romans conquered the area in 168 BC after a conflict known as the Illyrian Wars. Illyria is now part of modern Albania.

Orsino, Duke of Illyria is a character in William Shakespeare’s “Twelfth Night”. The opening lines of the play, spoken by the love-smitten Orsino, are:

William Shakespeare wrote his comedy “Twelfth Night” as a Christmas entertainment (Twelfth Night being the end of the Christmas season). The play’s protagonist is a young woman named Viola. The plot calls for Viola to dress as a eunuch named Cesario who goes into the service of Duke Orsino. Orsino has Cesario go to Duchess Olivia to express his love for her. But Olivia falls for Cesario, Cesario (Viola) falls for Orsino, and hilarity ensues …

50 Word with room or system : OPERATING …

I think of an operating system as that piece of software that sits between the hardware on my computer and the programs that I choose to run. Developers of application programs don’t really have to worry about being able to “talk to” the countless different types of hardware found in the wide variety of computers that are manufactured, they just need to talk to the handful of operating systems that are out there, like Windows, Android, MAC and Unix. The operating system takes care of the rest.

52 Flummox … or a classic word game represented by the central grid of shaded squares, in which 15-, 17- and 55-Across can be found : BOGGLE

Boggle is a word game in which one uses 16 lettered dice in a 4×4 tray to find words. There was even a “Boggle” game show that ran on the Family Channel for a few months in 1994.

4 Three-vowel French word that sounds like a fourth vowel : EAU

In French, one conjunction is “et” (and).

Abou Ben Adhem, also known as Ibrahim Bin Adham, was an Arab Muslim saint. He was made famous in the western world with the publication in 1838 of the poem “Abou Ben Adhem” that was composed by the English poet James Henry Leigh Hunt.

When I was growing up in Ireland, there was a surprisingly popular BBC television show featuring professional ballroom dancing called “Come Dancing”. It ran almost every year from 1949 to 1998, and in 2004 the BBC resurrected it with a new twist, adding celebrities to dance with the professionals. The new show, called “Strictly Come Dancing”, is a huge success and has become a worldwide franchise. Over here we watch the American version called “Dancing with the Stars”. It really can be fun television …

Elijah was a prophet in the northern kingdom of Israel according to the Books of Kings in the Hebrew Bible and the Qur’an. The name “Elijah” translates from Hebrew as “My God is Yahweh”. Elijah is also known as Elias.

“Hodad” is a slang term that dates from the fifties. It is used to describe someone who hangs out at the beach, but someone who isn’t a surfer. Hodads were mainly into cars and music.

The heft of something is its weight, its heaviness. The term “heft” is derivative of the verb “to heave” meaning “to lift, raise”.

A “snee” is a type of dagger formerly used by Scottish highlanders.

Alan Rickman was a marvelous English actor, one famous for playing bad guy Hans Gruber in the original “Die Hard” film, Severus Snape in the “Harry Potter” series and (my personal favorite) Eamon de Valera in “Michael Collins”. Sadly, Rickman passed away in January 2016, after which fans created a memorial under the “Platform 9¾” sign in London’s Kings Cross Railway Station, from where the Hogwarts Express is said to depart in the “Harry Potter” universe.

Georgia State University (GSU) is located in downtown Atlanta. It was established in 1913 as a branch of Georgia School of Technology called the Evening School of Commerce.