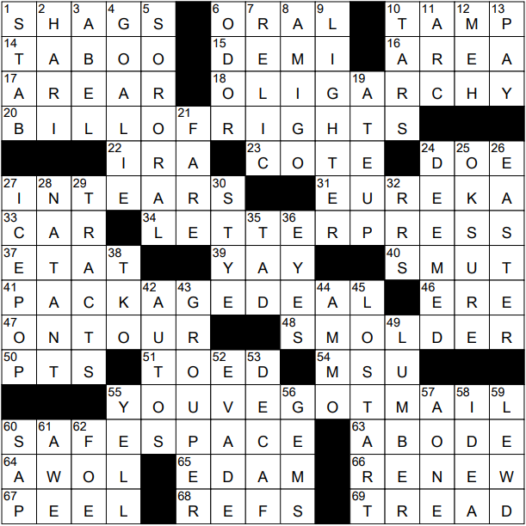 Constructed by: Emily Rourke
Edited by: Will Shortz

Themed answers each start with something found in YOUR MAIL:

Demi Moore was born Demetria Guynes and took the name Demi Moore when she married her first husband, Freddy Moore. Moore’s second husband was Bruce Willis. She changed her name to Demi Guynes Kutcher a few years after marrying her third husband, Ashton Kutcher. However, Kutcher and Moore split in 2013.

18 Rule by a small group : OLIGARCHY

20 Early addendum to the Constitution : BILL OF RIGHTS

Letterpress is the original printing press technique, invented by Johannes Gutenberg in the mid-1400s. The basis of such printing is the use of type (letters) in relief, raised from some surface so that the letters alone make contact with the paper being printed.

64 Someone sought by mil. police : AWOL

“Mata Hari” was the stage name used by Margaretha Geertruida Zelle, born in the Netherlands in 1876. After an unsuccessful and somewhat tragic marriage, Zella moved to Paris in 1903 where she struggled to make a living. By 1905 she was working as an exotic dancer and using the name Mata Hari. She was a successful courtesan, notably moving in various circles of high-ranking military officers. She apparently worked as a double agent, both for the French and the Germans. When Mata Hari was accused by the French of passing information to the enemy, she was tried, found guilty and executed by firing squad at the height of WW1, in 1917.

3 Brother betrayed in the Bible : ABEL

The odor-eliminating product we know today as Febreze was developed in England in the early nineties. Febreze is now produced by Procter & Gamble.

Something described as natant is floating or swimming. The term “natant” comes from the Latin “natare” meaning “to swim”.

44 Peas, to some classroom pranksters : AMMO

53 Java without the jolt : DECAF

Back in 1850, the name “java” was given to a type of coffee grown on the island of Java, and the more general usage of the term spread from then.

60 What tapping a maple yields : SAP