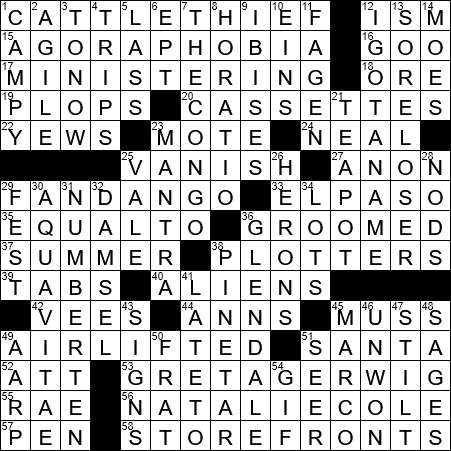 Constructed by: Patti Varol & Doug Peterson
Edited by: Will Shortz

18 Half of a frozen foods brand : ORE

A mote is a speck of dust.

Neal Stephenson is a novelist and video game designer whose work is often classified as science fiction or speculative fiction. I must admit, I haven’t indulged …

27 Before thou knowest : ANON

Although there have been human settlements in the El Paso area for thousands of years, the first European settlement was founded in 1659 by the Spanish. That first community was on the south bank of the Rio Grande, and was called El Paso del Norte (the North Pass). Most of the urban development under Spanish rule took place on the south side of the river, with El Paso del Norte acting as the center of governance for the Spanish for the territory of New Mexico. The Rio Grande was chosen as the border between Mexico and the US in 1848, so most of the city of El Paso del Norte became part of the Mexican state of Chihuahua (and is now called Ciudad Juárez ). The area north of the river developed as a US military post, eventually becoming the modern city of El Paso, Texas.

The Mexican city sitting across the border from El Paso is more correctly called Ciudad Juárez. Juárez used to be called El Paso del Norte (the North Pass). It was to be the younger settlement on the northern side of the Rio Grande which would retain the “El Paso” name.

“Aliens” is a 1986 sequel to the very successful science-fiction movie “Alien” released in 1979. “Aliens” was filmed at Pinewood Studios in England, and at the decommissioned Acton Lane Power Station in London. The film was directed by James Cameron, and starred Sigourney Weaver reprising her role as Ellen Ripley from “Alien”.

There is a pair of letters V (vees) in the word “skivvies”.

Author Ann Brashares writes fiction aimed at young adults. She is best known for her series of novels “The Sisterhood of the Traveling Pants”. The first book in that series tells the story of four young girls with differing shapes and size who find a pair of jeans that fits all four of them perfectly.

51 Figure that goes through the roof in December? : SANTA

Natalie Cole is the daughter of Nat King Cole. Natalie’s mother was Maria Cole, a singer with the Duke Ellington Orchestra. The most famous version of the hit song “Unforgettable” was released in 1951 by Nat King Cole. In 1991, Natalie Cole recorded a version that was mixed with an earlier 1961 version sung by her father, creating an “unforgettable” father-daughter duet that was made 26 years after Nat King Cole had passed away.

The Congo River in Africa is the second-largest in the world in terms of volume of water discharged (after the Amazon), and also the second longest river in Africa (after the Nile). The Congo is named for the ancient Kingdom of Kongo that was once located at the mouth of the river.

8 Survivor at the end of “Hamlet” : HORATIO

Horatio is a character in Shakespeare’s “Hamlet”. He is a friend of the play’s hero and a relatively uninterested party in the intrigue of the storyline. As a trusted friend, Horatio serves as a sounding board for Hamlet, allowing us in the audience to gain more insight into Hamlet’s thinking and character as we listen to the two in conversation. One of Horatio’s more famous lines is spoken right after the title character dies, as Horatio says goodbye to his friend:

14 Tavern in the same town as Krusty Burger : MOE’S

In the UK, the Prime Minister’s residence at 10 Downing Street in London is most usually referred to as “Number 10”. The building is really quite large, with three floors (and a basement kitchen) and has about one hundred rooms. The top floor is the private residence of the Prime Minister and his or her family. Number 10 is large, as it was originally three houses. The structure was remodeled into a residence for Prime Minister Sir Robert Walpole in 1732, as a gift from King George II.

43 Communicates nonverbally, in a way : SIGNS

49 Org. whose website has a Social Security Resource Center : AARP