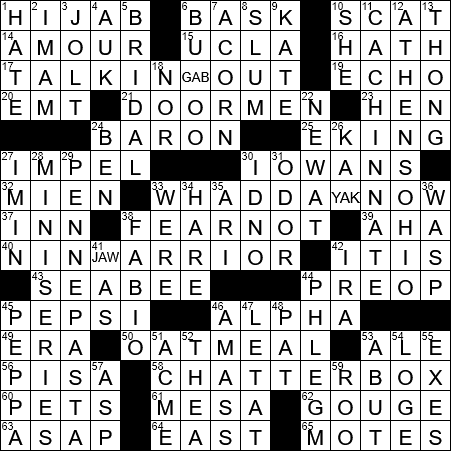 Themed answers each include a rebus square (BOX) filled with a synonym of “CHATTER”:

1 Halima Aden became the first Sports Illustrated model to wear one in 2019 : HIJAB

“Scat” is a term routinely used by hunters and trackers for non-human animal feces.

14 Romance, in one of the Romance languages : AMOUR

15 Sch. with the song “Hail to the Hills of Westwood” : UCLA

The city of Dubuque, Iowa is named for a pioneer from Quebec who arrived in the area in 1785. That pioneer was one Julien Dubuque.

43 Term for a naval builder that looks like an aquatic insect : SEABEE

45 Drink once advertised as “Twice as much for a nickel” : PEPSI

A cream ale is an American beer that is similar to a pale lager, even though it truly is a top-fermented ale.

The Painted Desert in Arizona is a beautiful badlands area noted for colorful rock formations. The name was given way back in 1540 by the Spanish, and is an English translation of the Spanish name “El Desierto Pintado”.

Puffins are seabirds that are found in the North Atlantic and North Pacific oceans. They feed primarily by diving into the water to catch fish, and are known for their ability to swim underwater using a “flying” technique.

6 Cause of dread : BUGABOO

“Bugaboo” is another term for “bogeyman”, an imaginary and scary creature used to frighten children.

7 Something to squirrel away? : ACORN

“Murder, She Wrote” is a mystery television show with the lead character Jessica Fletcher, a mystery writer who is also an amateur detective. Fletcher is played by the charming Angela Lansbury. The show was created by Richard Levinson and William Link who had just failed with the TV series “Ellery Queen”, which was pulled after only one season. “Ellery Queen” was also about a mystery writer who was an amateur detective.

18 Word between here and there : NOR

“Neither here nor there”

I would probably capitalize the German noun “Hasenpfeffer” …

In the “Star Wars” universe, the Jawa are a race of rodent-like pygmies who live on the desert planet called Tatooine.

44 One of the four humors : PHLEGM

“Peppa Pig” is a children’s animated show that is produced in the UK and airs all over the world. There’s even a Peppa Pig World theme park located in Hampshire, England.