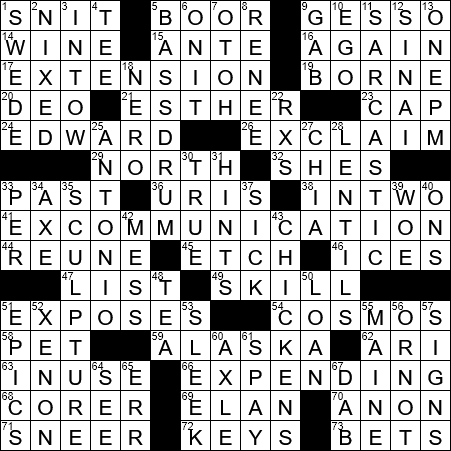 Themed answers are words beginning with the prefix ex- that have been reformatted as two-word phrases starting with the word “Ex” meaning “FORMER LOVER”:

9 Undercoat of an oil painting : GESSO

21 One of a pair of Old Testament books with female names : ESTHER

The only books in the Old Testament named for females are “Ruth” and “Esther”.

Esther was a Jewish queen, wife of the Persian king Ahasuerus and the heroine of the Book of Esther in the Bible. By the way, Esther is the only book in the Bible that doesn’t mention the word “God”.

Given that it’s the capital of the vast state of Alaska, it is perhaps not surprising to learn that the municipality of Juneau is almost as big as the area of the states of Rhode Island and Delaware combined. And yet, Juneau only has a population of about 31,000 people!

1 Neighbor of a Norwegian : SWEDE

The use of “to nix” as a verb, meaning “to shoot down”, dates back to the early 1900s. Before that, “nix” was just a noun meaning “nothing”. “Nix” comes from the German “nichts”, which also means “nothing”.

The first golf balls had smooth surfaces. The idea of adding dimples grew out of the empirical observation that used balls flew further. These older balls were beaten up and had nicks in the surface. The nicks, and the dimples in a modern ball, create a turbulent layer of air that “sticks” to the surface of the ball, and this sticky layer of turbulent air has less drag as it slices through the rest of the air between the golfer and the ball’s destination.

The Sinai Peninsula is in the eastern part of Egypt, and is a triangular landform bounded by the Mediterranean to the north and the Red Sea to the south. It is the only part of Egypt that lies in Asia as opposed to Africa. The eastern land border of the peninsula is shared with Israel, and Israel occupied the Sinai during the 1956 Suez Crisis and the Six Day War of 1967.

18 Emperor just before the Year of the Four Emperors : NERO

25 Villain in Shakespeare’s “The Tempest” : ANTONIO

Chia is a flowering plant in the mint family. Chia seeds are an excellent food source and are often added to breakfast cereals and energy bars. There is also the famous Chia Pet, an invention of a San Francisco company. Chia Pets are terra-cotta figurines to which are applied moistened chia seeds. The seeds sprout and the seedlings become the “fur” of the Chia Pet.