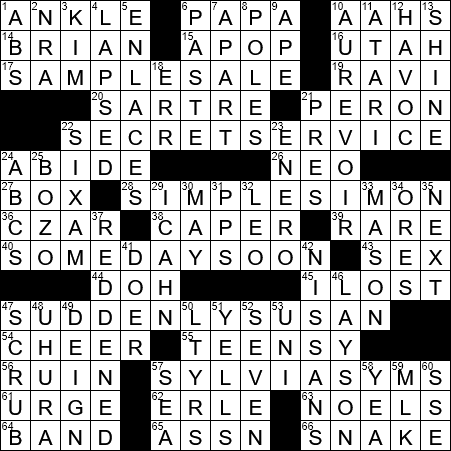 Themed answers each comprise two words starting with SS. Additionally, the second letter of each word forms a progression down the grid through all the vowels: A, E, I, O, U and (sometimes) Y!

6. Smurf with a white beard : PAPA

“Brian” is easily mistaken for “Brain”.

Dyslexia is a disorder in which a person with normal intelligence has difficulty in reading. The term “dyslexia” comes from the Greek “dys-” meaning “bad” and “lexis” meaning “word”.

20. French writer who refused the 1964 Nobel Prize in Literature : SARTRE

Simple Simon met a pieman,
Going to the fair;
Says Simple Simon to the pieman,
Let me taste your ware.

“Suddenly Susan” is a sitcom starring Brooke Shields in the title role of a glamorous magazine writer in San Francisco. Another cast member in the show was actor David Strickland, who played a rock music reporter working on the magazine. Sadly, Strickland committed suicide during the third season. The “Suddenly Susan” writers dealt with the tragedy very directly. In one episode, Strickland’s character goes missing, just as the actor did in real life. Interspersed in the storyline are out-of-character interviews with cast members. The episode ends with a phone call from the police, but without unveiling Strickland’s character’s exact fate.

Actress Brooke Shields started working as a child model when she was just 11 months old, appearing in an ad for Ivory soap in 1966. At 14, Shields became the youngest fashion model to ever appear on the cover of “Vogue” magazine. She was 12 years old when she had her first acting role, a leading part in 1978’s “Pretty Baby”. Her big break in films came with the 1980 film “The Blue Lagoon”, when she played alongside Christopher Atkins, portraying two teenagers marooned on a tropical island. Shields was married to tennis star Andre Agassi from 1997 to 1991.

57. Nightclub singer who was given the nickname “Buddha” by Frank Sinatra : SYLVIA SYMS

Havoc is a great damage or destruction. The term comes from the Anglo-French phrase “crier havok”, which was an order given in the late 1500s to soldiers, instructing them to seize plunder.

A bootblack (also “shoeblack”) is a person who polishes and shines boots and shoes for a living.

We usually use the term “Air Force One” for the purpose-built military aircraft that transports the president, although any plane can use the call sign provided the president is aboard. There was an incident in 1953 in which a flight carrying President Eisenhower (flight no. Air Force 8610) flew close to commercial airliner (flight no. Eastern 8610). The special call sign “Air Force One” was created soon after in order to avoid confusion of flight numbers in the future.

A bozo is a person with a low IQ, and someone who is usually quite muscular. We’ve been using the term since the early 1900s and it possibly comes from the Spanish “bozal” that was used to describe someone who spoke Spanish poorly.

31. Second addendum to a letter, for short : PPS

48. Communications officer on the Enterprise : UHURA