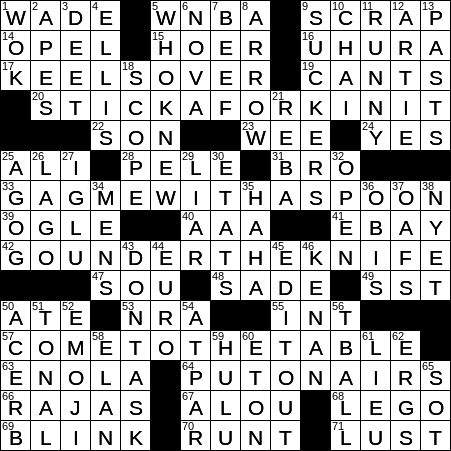 Constructed by: Kathy Bloomer
Edited by: Will Shortz

Themed answers are common phrases that include an item that one might find on a dinner table:

The Los Angeles Sparks women’s basketball team was founded just before the WNBA opened its doors for business in 1997.

The New York Liberty was founded in 1997 and was one the original eight teams to play in the WNBA. The franchise is based in Newark, New Jersey.

Muhammad Ali won 56 professional fights, 37 of which were knockouts. He lost 5 fights, 4 being decisions and one being a technical knockout (TKO). The TKO-loss was Ali’s second-last fight, against Larry Holmes. By the time Ali took on Holmes, he was already showing signs of Parkinson’s Syndrome, although the diagnosis would not come until four years later.

33. Expression of disgust in Valley Girl-speak : GAG ME WITH A SPOON!

Felipe Alou is a former professional baseball player and manager. Alou managed the Montreal Expos from 1992 to 2001, and the San Francisco Giants from 2003 to 2006. Alou was born and raised in the Dominican Republic and came to the US to play for the Giants in 1955. Felipe’s brothers Matty and Jesús followed him to the US, and into Major League baseball.

“Wok” is a Cantonese word, and the name for the frying pan now used in many Asian cuisines.

The whole “Planet of the Apes” franchise was based on a French novel by Pierre Boulle called “La Planète des singes”. The book was published in English as “Monkey Planet”, but was re-released as “Planet of the Apes” when Hollywood had made its choice for a movie title.

“DEET” is short for N,N-Diethyl-meta-toluamide, an active ingredient in insect repellents. DEET is most often used to repel mosquitoes by applying it to the skin and/or clothing. It is also used to protect against tick bites.

Artie Shaw was a composer, bandleader and a jazz clarinetist. Shaw’s real name was Arthur Jacob Arshawsky, born in New York City in 1910. One of his many claims to fame is that he (a white bandleader) hired Billie Holiday (a black vocalist) and toured the segregated South in the late thirties. Holiday chose to leave the band though, due to hostility from Southern audiences back then. Artie Shaw was married eight times in all. The list of his wives includes the actresses Lana Turner and Ava Gardner, as well as Betty Kern, daughter of songwriter Jerome Kern.

Scope is a brand of mouthwash made by Procter & Gamble. Scope has been marketed as the “better-tasting alternative” to Listerine.

21. McEntire known as “The Queen of Country” : REBA

“The Adventures of Pinocchio” is an 1883 children’s novel by Carlo Collodi. It is all about an animated puppet named Pinocchio and Geppetto, his poor woodcarver father. Pinocchio is prone to telling lies, the stress of which causes his short nose to become longer.

44. Currency unit worth a little more than a dollar : EURO

Kenan Thompson is an actor and comedian who is perhaps best known as a “Saturday Night Live” (SNL) cast member, joining the show in 2003. Thompson holds the record for the most celebrity impressions on SNL, at over one hundred.

Prince Harry, Duke of Sussex is the younger of the two sons of Charles and Diana, Prince and Princess of Wales. Famously, Prince Harry married American actress Meghan Markle in 2018. The groom’s name was Prince Henry of Wales until the marriage, at which time his name changed officially to “Prince Harry”.