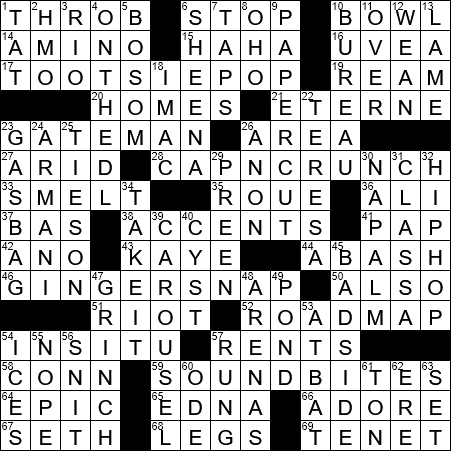 Themed answers are “SOUND BITES”, i.e. things that we can eat and the name of which includes a SOUND:

The first traffic lights date back to 1868 when they were installed outside the Houses of Parliament in London. They resembled the signals already in use for trains, with semaphore arms and red and green gas lamps for nighttime use. That first system was operated manually, by a policeman at the base. Sadly, one police officer was killed, just one year after the light’s installation, when the gas system exploded.

Tootsie Rolls were developed by an Austrian candy maker called Leo Hirschfeld in New York City in 1896. Hirschfeld named the candy after his daughter, who had the nickname “Tootsie”. A couple of derivative products have become quite popular, namely Tootsie Pops and Tootsie Roll Midgees.

“Real estate agent” is a general, generic term. “Realtor” is the name given to a member of the trade association known as the National Association of Realtors (NAR). The NAR has gone so far as the trademark the term “Realtor” in the US.

28. Breakfast cereal with a naval officer on its box : CAP’N CRUNCH

Someone described as “dissolute” lacks ethical restraint, has loose morals. The term comes from the Latin verb “dissolvere” meaning “to loosen up”.

The Rumble in the Jungle was the celebrated 1974 fight between Muhammad Ali and George Foreman that took place in Zaire (now the Democratic Republic of the Congo). The fight was set in Zaire because of financial arrangements between promoter Don King and Zaire’s President Mobutu Seko. Ali coined the term “Rope-a-dope” to describe his incredibly successful strategy in the contest. From the second round onwards, Ali adopted a protected stance on the ropes letting Foreman pound him with blows to the body and head, with Ali using his arms to dissipate the power of the punches. He kept this up until the eighth round, and then opened up and downed the exhausted Foreman with a left-right combination. I hate boxing but I have to say, that was an fascinating fight …

In French, accents over the letter E can be acute (é) or grave (è).

The actor Danny Kaye was a big hit in his native US, but also in France. Kaye was the first ambassador-at-large for UNICEF and the French awarded him the Legion of Honor in 1986 for his work.

54. As originally placed : IN SITU

Hartford is the capital of the state of Connecticut. The city is home to the headquarters of many insurance companies. As such Hartford is nicknamed the “Insurance Capital of the World”.

In “the Simpsons” television show, Bart Simpson’s teacher is one Edna Krabappel. Edna marries Ned Flanders, who is the next-door neighbor to the Simpson family.

Even though the 2016 Olympic Games was a summer competition, it was held in Rio de Janeiro in winter. As Rio is in the southern hemisphere, the opening ceremony on 5th August 2016 fell in the local winter season. The 2016 games was also the first to be held in South America, and the first to be hosted by a Portuguese-speaking country.

Something described as “on the down low” is “secret”. The phrase is often shortened to “on the DL”, The same abbreviated expression can also mean “on the disabled list” in sports.

6. “For Your Eyes Only” singer Easton : SHEENA

Sheena Easton is a Scottish singer. She was big in the eighties with songs like “9 to 5” (released as “Morning Train” in the US) and “For Your Eyes Only”, which is the theme song for the James Bond film of the same name.

In addition to the James Bond series of novels, Ian Fleming wrote a collection of “Bond” short stories called “For Your Eyes Only”. The name of the collection was used as for one of the Bond films. “Quantum of Solace” was one of those stories, and this title was also used for a Bond film, even though the plot bears no resemblance to the storyline.

Napalm is a incendiary compound used in weapons that is made from petroleum mixed with a thickening agent. Napalm was developed in a secret program at Harvard during WWII. It was initially used in incendiary bombs and in flamethrowers. The thickening agent in napalm causes the burning material to stick to skin causing severe burns. Because of this, the UN declared the use of napalm in civilian areas a war crime in 1980.

The Grinch is the title character in Dr. Seuss’s 1957 children’s book “How the Grinch Stole Christmas!” Based on Seuss’s hero, we now use the term “grinch” for someone who is opposed to Christmas festivities or who is coarse and greedy in general.

The exact etymology of “snit”, meaning “fit of temper”, isn’t really known. The term was first used in print in the play “Kiss the Boys Goodbye” by Clare Booth Luce, which dates back to the 1930s and is set in the American South.

Here in the US, a ton is equivalent to 2,000 pounds. Over in the UK, a ton is 2,240 pounds. The UK unit is sometimes referred to as an Imperial ton or sometimes a “long ton”. Folks over there refer to the US ton then as a “short ton”. To further complicate matters, there is also a “metric ton” or “tonne”, which is equivalent to 2,204 pounds. Personally, I wish we’d just stick to kilograms …