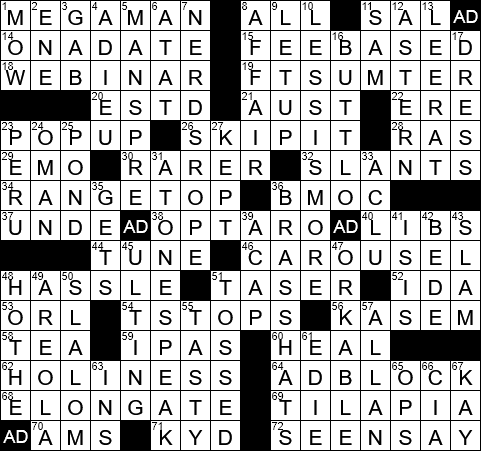 Four black squares (BLOCKS) in today’s grid contain the letters AD, and these letters form part of the adjacent answers:

This is the be-all and end-all of clues.

“Webinar” is short for “Web-based seminar”, i.e. a presentation, lecture or similar event held online. In a Webinar, there is two-way interaction, with the audience able to ask questions of the presenter.

A resident assistant or resident adviser (RA) is a peer leader found in a residence hall, particularly on a college campus.

A pilot light is a small gas flame, one using a relatively small amount of fuel, that remains lit as an ignition source for larger gas burners.

Basically, I think a t-stop is used in lenses on movie cameras the same way that an f-stop is used on lenses in still cameras.

59. Some brewery offerings, in brief : IPAS

The name “tilapia” is used for almost a hundred species of related fish, most of which are found in freshwater. Tilapia are found in many fish farms as they grow very quickly and are popular in restaurants.

John Adams was the second President of the United States. I must admit that I learned much of what I know about President Adams in the excellent, excellent HBO series “John Adams”, which is based on David McCullough’s 2001 biography of the same name. Having said that, I have also visited the Adams home in Quincy, Massachusetts several times. He was clearly a great man with a great intellect …

John Quincy Adams, the son of John Adams, was the 6th US president. Like his father, John Quincy worked for many years as a diplomat representing the young United States. After leaving office, Adams served in Congress as Representative from Massachusetts, becoming the only president ever to enter the House after leaving the office of president.

Thomas Kyd’s most famous work is “The Spanish Tragedy”, written in the mid to late 1580s. Even though Kyd was a recognized dramatist within his own lifetime, he fell foul of the standards of the Privy Council of the day and was imprisoned and tortured for allegedly being an atheist. He died soon after, impoverished.

See ‘n Say is a toy that was introduced by Mattel back in 1965. Mattel already had a line of “talking” toys, especially the very successful Chatty Cathy doll. All these toys spoke random phrases after a string was pulled. The See ‘n Say toy was a little different in that the child using the toy could choose which phrase they wanted to hear.

10. Philosophy of simplicity : LESS IS MORE

Ludwig Mies van der Rohe was a German architect who was routinely referred to simply as “Mies”. I am a philistine, I know, but Mies’ buildings look very plain to me. However, he did come up with two far-from-plain sayings: “less is more” and “God is in the details”.

23. Home of the oldest university in the Western Hemisphere (founded in 1551) : PERU

The National University of San Marcos is the premier institution for higher education in Peru. Located in the capital city of Peru, it was founded in 1551. That makes San Marcos the oldest university in South America.

Qaboos bin Said al Said is the current Sultan of Oman, who came to power in a coup in 1970 by deposing his own father. Qaboos has no children, and no agreed heir. His current instructions are for the royal family to agree on a successor after his death. Qaboos has also specified that should the royal not be able to agree on a successor, then the country’s Defense Council will make the decision, choosing between two names that the Sultan placed in a sealed envelope to be opened after his passing.

“Polliwog” is another word for “tadpole”, which describes the larval stage of an amphibian such as a frog or a toad. The term “polliwog” has been around since the mid-15th century and probably comes from the Old English words “pol” (head) and “wiglen” (wiggle).

According to Arthurian legend, Sir Kay was one of the first Knights of the Round Table. He was also King Arthur’s foster brother. Over time, Sir Kay came to be described as a boor and bully, having started out as valiant warrior.