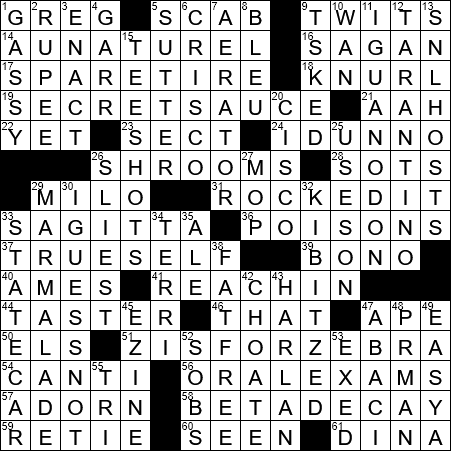 Emerson, Lake and Palmer (ELP) were an English supergroup popular in the seventies. Keith Emerson had been successful with the Nice, Greg Lake with King Crimson, and Carl Palmer with Atomic Rooster. Given that all three performers had already achieved success prior the formation of the group, ELP is termed a “supergroup”.

5. One who crosses the line : SCAB

“Au naturel” is a French phrase, simply meaning “in a natural state”. We use the term in the same sense, and also to mean “nude”.

16. He said “If you wish to make an apple pie from scratch, you must first invent the universe” : SAGAN

Milo Minderbinder is the mess officer in Joseph Heller’s 1961 novel “Catch-22”. In the 1970 film adaptation of the book, the Minderbinder character is played by Jon Voight.

31. Wore an outfit with panache, informally : ROCKED IT

33. Constellation between Cygnus and Aquila : SAGITTA

58. Process by which neutrinos are produced : BETA DECAY

The Crisco brand of shortening was the first shortening to be made entirely from vegetable oil. Although that sounds like a good thing, it’s actually made by hydrogenating vegetable oil so that it has physical properties similar to the animal shortening it was designed to replace. This hydrogenation turns good fats into bad fats, so medical professionals suggest limited intake.

12. Samuel L. Jackson has been in six of his movies : TARANTINO

Cisco is a company that I really admire (in terms of innovation and management). Headquartered in San Jose, California, Cisco develops and sells products and services in the communications sector. The name “Cisco” was taken from the name of the city San Francisco.

Marmalade is my favorite fruit preserve. The essential ingredients in a marmalade are fruit juice and peel, and sugar and water. “Marmalade” comes from the Portuguese “marmelada” meaning “quince jam”.

To kibitz (or less commonly “to kibbitz”) is to look on and offer unwanted advice. The term comes into English from German via Yiddish. “Kibitz” developed in German from the name of the bird “Kiebitz”, which had the reputation as a meddler.

Terri Clark is a country music artist from Montreal in Canada who has had success right across North America, and who now resides in Nashville, Tennessee.

The lawyer Harlan F. Stone served as US Attorney General before being appointed to the US Supreme Court in 1925. Stone became the court’s Chief Justice in 1941, but only for five years as he passed away in 1946.