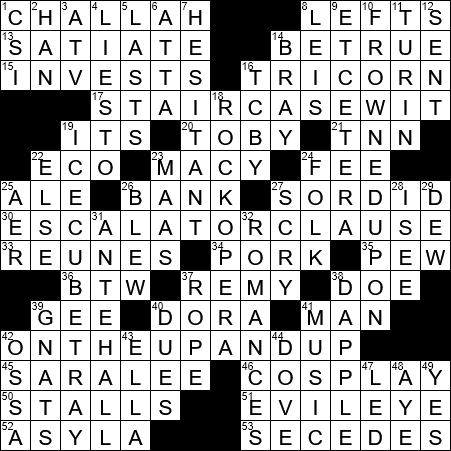 CROSSWORD CONSTRUCTOR: Michael Hawkins
THEME: Bottom-Left to Top-Right
We have a little grid art today, with black squares defining steps moving from the bottom-left to the top-right. Out long answers all point to a “climbing” theme:

17A. Cleverness thought of too late to use : STAIRCASE WIT
30A. Flexible contract provision : ESCALATOR CLAUSE
42A. Straight-shooting : ON THE UP AND UP

Today’s Wiki-est, Amazonian Googlies
Across
1. Braided Jewish bread : CHALLAH
Challah is a special braided bread that is eaten by Ashkenazi Jews on the Sabbath. The bread is served to commemorate the manna that fell from the heavens as the Israelites wandered around the desert after the Exodus from Egypt.

17. Cleverness thought of too late to use : STAIRCASE WIT
A clever remark that comes to mind too late is known as staircase wit. The original French term can also be used, which is “l’esprit d’escalier”.

20. Country singer Keith : TOBY
Toby Keith is a country music singer from Clinton, Oklahoma. One of Keith’s number one hits is a 2003 duet with Willie Nelson called “Beer for My Horses”.

21. Former inits. for Spike TV : TNN
Spike TV is a 2003 relaunch of The Nashville Network (TNN) and was marketed as the first television channel for men. The station owners ran into trouble though as the director Spike Lee sued, claiming that viewers would assume he was associated with the channel because of the use of “Spike”. The suit was settled when Lee concluded that there was no intention to trade on his name.

23. Department store founder R. H. ___ : MACY
The original Macy’s store was opened by Rowland Hussey Macy in Haverhill, Massachusetts in 1851. This store, and several others that Macy opened, all failed. Macy picked himself up though, and started over again in New York City. Those early New York stores all focused on the sale of dry goods, but added departments quickly as the clientele grew. The Macy’s “star” logo has been around since the company was first established. Macy chose the star because it mimicked the star tattoo that he got as a teenager when he was working on a whaling ship out of Nantucket.

25. The “A” of I.P.A. : ALE
India pale ale (IPA) is a style of beer that originated in England. The beer was originally intended for transportation from England to India, hence the name.

30. Flexible contract provision : ESCALATOR CLAUSE
An escalator clause in a contract is a provision dictating that an amount can change under certain conditions. For example, wage rate might be linked with the cost of living index.

34. Wasteful government spending : PORK
Pork barrel politics have been around for a long time. The term originated in 1863 in a story by Edward Everett Hale called “The Children of the Public”. Hale used “pork barrel” in a positive way, describing any public spending by government for the benefit of citizens. By the 1870s the term “pork” had negative connotations, with references in the press to “pork barrel bills” in Congress. Nowadays “pork” really applies to any government project designed to benefit a relatively small group of citizens (usually potential voters for a particular politician) with the bill being paid by the citizenry as a whole.

35. Seating with hymnals : PEW
A pew is a bench in a church, one usually with a high back. The original pews were raised and sometimes enclosed seats in the church used by women and important men or families. “Pew” comes from the Old French “puie” meaning “balcony, elevation”.

37. ___ Martin (Cognac maker) : REMY
Remy Martin is my favorite brand of cognac (remember that when it’s my birthday!). In China, the name Remy Martin is not used, but rather the more colorful moniker “man-headed horse” which describes the centaur logo on the bottle.

38. It can go for a buck : DOE
A male deer is usually called a buck, and a female is a doe. However, the male red deer is usually referred to as a stag. The males of even larger species of deer are often called bulls, and females cows. In older English, male deer of over 5 years were called harts, and females of over 3 years were called hinds. The young of small species are known as fawns, and of larger species are called calves. All very confusing …

40. Cartoon character who explores with Boots : DORA
“Dora the Explorer” is a cartoon series shown on Nickelodeon. Part of Dora’s remit is to introduce the show’s young viewers to some Spanish words and phrases.

45. Dessert brand : SARA LEE
In 1935, businessman Charles Lubin bought a chain of three bakeries in Chicago called Community Bake Shops, and soon expanded the operation into seven stores. Lubin introduced a cream cheesecake that he named after his daughter who was only 8-years-old at the time, Sara Lee Lubin. The cheesecake was a hit and he renamed the bakeries to Kitchen of Sara Lee. The business was bought out by Consolidated foods in 1956, but the brand name Sara Lee persists to this day, as does Ms. Sara Lee herself who now goes by the name Sara Lee Schupf.

46. Dressing up as a fictional character with others : COSPLAY
Cosplay (costume play)

51. Malevolent look : EVIL EYE
The “evil eye” is a curse that is cast by giving a malicious glare.

Down
1. TV show that spawned an exhibit at Chicago’s Museum of Science and Industry : CSI
The “CSI” franchise of TV shows has been tremendously successful, but seems to have finally wound down. “CSI: Miami” (the “worst” of the franchise, I think) was cancelled in 2012 after ten seasons. “CSI: NY” (the “best” of the franchise) was cancelled in 2013 after nine seasons. The original “CSI: Crime Scene Investigation”, set in Las Vegas, hung in there until 2015 when it ended with a two-hour TV movie. The youngest show in the series was “CSI: Cyber”. It lasted for two season before being canceled in 2016.

2. ___ Solo : HAN
Han Solo is the space smuggler in “Star Wars” played by Harrison Ford. Ford was originally hired by George Lucas just to read lines for actors during auditions for “Star Wars”, but over time Lucas became convinced that Ford was right for the pivotal role of Han Solo.

8. Floral necklaces : LEIS
“Lei” is the Hawaiian word for “garland, wreath”, although in more general terms a “lei” is any series of objects strung together as an adornment for the body.

9. Latin phrase used listlessly? : ET CETERA
The Latin phrase “et cetera” translates as “and other things”. The term is usually abbreviated to “etc.”

11. City NW of Genoa : TURIN
Turin (“Torino” in Italian) is a major city in the north of Italy that sits on the Po River. Back in 1861, when the Kingdom of Italy was formed, Turin was chosen as the first capital of the country.

16. Dessert chain : TCBY
TCBY is a chain of stores selling frozen yogurt, founded in 1981 in Little Rock, Arkansas. The acronym TCBY originally stood for “This Can’t Be Yogurt”, but this had to be changed due to a lawsuit being pressed by a competitor called “I Can’t Believe It’s Yogurt”. These days TCBY stands for “The Country’s Best Yogurt”.

18. The Who’s “Tommy,” e.g. : ROCK OPERA
“Tommy” is the fourth album recorded by the British band called the Who. “Tommy” was the original rock opera and was adapted for both the stage and screen, with both adaptations becoming huge successes. The title character has an uncanny ability to play pinball, giving rise to the hit song “Pinball Wizard”.

23. Peter who wrote “Serpico” : MAAS
Peter Maas was journalist and author. Maas wrote a couple of books that were adapted into successful movies. He wrote a biography of New York City Police officer Frank Serpico that was made into the 1973 “Serpico” starring Al Pacino in the title role. He also wrote a biography of a low-level Mafia informant called “The Valachi Papers” that was was made into a 1972 film of the same name starring Charles Bronson as Valachi.

25. ___ Lingus : AER
Aer Lingus is my favorite airline! Well, the service isn’t that great, but when I get on board an Aer Lingus plane I feel like I am back in Ireland. Aer Lingus is the national airline of Ireland, with “Aer Lingus” being a phonetic spelling of the Irish “aer-loingeas” meaning “air fleet”. These days Aer Lingus can only lay claim to the title of Ireland’s oldest airline as it is no longer the biggest. That honor goes to the controversial budget airline called Ryanair.

37. Need for tug-of-war : ROPE
Tug-of-war is a strength competition between two teams who pull on opposite ends of a rope, vying to pull the opponents over a marked line. The sport was an event in the Summer Olympic Games from 1900 until 1920. The USA teams won all three medals for the tug-of-war at the 1904 Olympic Games in St. Louis.

38. Rounded patch of color on an animal coat : DAPPLE
A dapple is a mottled marking on the coat of perhaps a horse or a dog.

42. Mount of Greek myth : OSSA
Mount Ossa in Greece is located between Mt. Pelion in the south, and the famed Mt. Olympus in the north. Mount Ossa is also known as Kissavos.

43. Jazz great Fitzgerald : ELLA
Ella Fitzgerald, the “First Lady of Song”, had a hard and tough upbringing. She was raised by her mother alone in Yonkers, New York. Her mother died while Ella was still a schoolgirl, and around that time the young girl became less interested in her education. She fell in with a bad crowd, even working as a lookout for a bordello and as a Mafia numbers runner. She ended up in reform school, from which she escaped, and found herself homeless and living on the streets for a while. Somehow Fitzgerald managed to get herself a spot singing in the Apollo Theater in Harlem. From there her career took off and as they say, the rest is history.