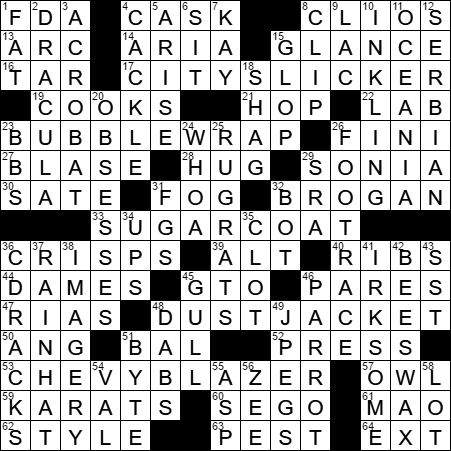 CROSSWORD SETTER: Susan Gelfand
THEME: Articles of Outerwear?
Today’s themed answers are common phrases, but each is clued as though it is an item of outerwear:

Today’s Wiki-est, Amazonian Googlies
Across
1. Medicine-approving org. : FDA
The Food and Drug Administration (FDA) approves drugs for specific conditions. It is quite legal for a healthcare professional to prescribe an approved medication for a use that is different to the FDA-approved indication. This usage of the drug is described as “off-label”.

8. Awards in the ad biz : CLIOS
The Clio Awards are the Oscars of the advertising world and are named after Clio, the Greek Muse of History. Clio was also the recorder of great deeds, the proclaimer and celebrator of great accomplishments and a source of inspiration and genius. The Clio Awards were first presented in 1959.

13. Rainbow shape : ARC
Sunlight shining through airborne water droplets can produce rainbows. The water droplets act as little prisms, dispersing the white light into its constituent colors. Sometimes we see double rainbows. If we look carefully, we can see that the order of the colors in the first and second arcs is reversed.

16. Paving goo : TAR
The terms “Tarmac” and “macadam” are short for “tarmacadam”. In the 1800s, Scotsman John Loudon McAdam developed a style of road known as “macadam”. Macadam had a top-layer of crushed stone and gravel laid over larger stones. The macadam also had a convex cross-section so that water tended to drain to the sides. In 1901, a significant improvement was made by English engineer Edgar Purnell Hooley who introduced tar into the macadam, improving the resistance to water damage and practically eliminating dust. The “tar-penetration macadam” is the basis of what we now call Tarmac.

23. Article of outerwear for a champagne drinker? : BUBBLE WRAP
Bubble wrap was invented in 1957 in an abortive attempt to make a 3-dimensional wall covering. The result was a material that wasn’t suitable as a “wallpaper” but that did make a great packing material. And don’t forget the last Monday of every January … that’s Bubble Wrap Appreciation Day.

27. Having a ho-hum attitude : BLASE
“Blasé”, meaning “nonchalant, bored from overindulgence” comes from French, in which language it can mean “satiated”.

29. Justice Sotomayor : SONIA
Sonia Sotomayor is the first Hispanic justice on the US Supreme Court, and the third female justice. Sotomayor was nominated by President Barack Obama to replace the retiring Justice David Souter.

32. Ankle-high work shoe : BROGAN
A brogan is a heavy boot, with the original brogans being boots worn by soldiers on both sides during the Revolutionary War and the Civil War. Apparently some British soldiers in the Revolutionary War wore brogans that could be worn on either foot in an attempt to get more even wear.

45. Classic muscle car : GTO
The Pontiac GTO was produced by GM from 1964 to 1974, and again by a GM subsidiary in Australia from 2004 to 2006. The original GTO’s design is credited to Pontiac chief engineer at the time John DeLorean, who later was found the DeLorean Motor Company.

50. Lee who directed “Life of Pi” : ANG
Taiwanese director Ang Lee sure has directed a mixed bag of films, mixed in terms of genre but not in terms of quality. He was at the helm for such classics as “Sense & Sensibility” (my personal favorite), “Crouching Tiger, Hidden Dragon”, “Hulk”, “Brokeback Mountain” and “Life of Pi”.

51. ___ Harbour, Fla. : BAL
Bal Harbour is a village in Florida that is located on the northern tip of the barrier island usually known as Miami Beach.

53. Article of outerwear for a General Motors employee? : CHEVY BLAZER
A blazer is a less formal version of a suit jacket, usually with a less formal cut and often metal buttons. The original “blazer” was a red jacket worn by members of the rowing club at a Cambridge university in England. The “blazer” is so called because the Cambridge version was “blazing red” in color.

59. Gold standards : KARATS
A karat (also “carat”, the spelling outside of North America) is a measure of the purity of gold alloys, with 24-karat representing pure gold.

60. ___ lily : SEGO
The sego lily is the state flower of Utah, and is a perennial plant found throughout the Western United States.

61. Chinese leader with a Little Red Book : MAO
During China’s Cultural Revolution, the Communist Party published a book of statements and writings from Chairman Mao Zedong. Here in the West the publication was usually referred to as “The Little Red Book”.

62. Panache : STYLE
Someone exhibiting panache is showing dash and verve, and perhaps has a swagger. “Panache” is a French word used for a plume of feathers, especially in a hat.

Down
1. What the “Gras” of Mardi Gras means : FAT
“Mardi Gras” translates from French as “Fat Tuesday”, and gets its name from the practice of eating rich foods on the eve of the fasting season known as Lent. Lent starts on the next day, called Ash Wednesday.

2. Count with fangs : DRACULA
“Dracula” is a novel written by the Irish author Bram Stoker and first published in 1897. Dracula wasn’t the first vampire of literature, but he certainly was the one who spawned the popularity of vampires in theater, film and television, and indeed more novels. Personally, I can’t stand vampire fiction …

7. Mary ___ cosmetics : KAY
Mary Kay Ash founded her skincare and cosmetics company, somewhat ominously on Friday, 13th September 1963. In 1968, Mary Kay Ash bought herself a pink Cadillac, specially painted to match the color of one of her compacts. The car became so famous that she gave away five of them to her top saleswoman, a tradition that endures to this day.

9. Fond du ___, Wis. : LAC
“Fond du lac” is French and translates as “bottom of the lake”, an apt name for the city of Fond du Lac, Wisconsin located at the foot of Lake Winnebago. If you like to play the lottery, you might want to stop off in Fond du Lac as there is a stretch of South Main Street called “Miracle Mile”. Back in 1993, someone bought a ticket there and won $100 million. Then in 2006, another store sold a ticket that won $209 million. These things always come in threes, so buy your tickets now …

11. Easter Island locale : OCEANIA
The part of the Pacific Ocean known as Oceania is roughly equivalent to the tropical islands of the South Pacific. Oceania can be divided into the regions of Polynesia, Melanesia and Micronesia.

“Rapa Nui” is the Polynesian name for what we are more likely to call Easter Island. The European name was coined by the Dutch explorer Jacob Roggeveen, who came across the island on Easter Sunday in the year 1722. Chilean-owned Easter Island is inhabited and is a location that is remarkably distant from neighboring civilization. The nearest inhabited island is Pitcairn Island, which is almost 1300 miles away.

18. Carpet variety : SHAG
Shag carpet is one with a deep pile, one with a “shaggy” appearance.

25. Rambunctious little kids : RUG RATS
“Rug rat” and “ankle-biter” are familiar terms meaning “child”, especially a child who is not yet walking.

32. Droid : BOT
A bot is computer program that is designed to imitate human behavior. It might crawl around the Web doing searches for example, or it might participate in discussions in chat rooms by giving pre-programmed responses. It might also act as a competitor in a computer game.

34. Alternative to FedEx : UPS
United Parcel Service (UPS) is based in Sandy Springs, Georgia and has its own airline that operates out of Louisville, Kentucky. UPS often goes by the nickname “Brown”, because of its brown delivery trucks and brown uniforms.

35. Thicken, as blood : CLOT
A blood clot is a very necessary response to an injury and is intended to prevent bleeding. Also called a “thrombus”, the clot comprises aggregated blood platelets trapped in a mesh made from fibrin, a fibrous protein. If a thrombus forms in a healthy blood vessel, restricting blood flow, that condition is known as thrombosis.

42. Honeycomb product : BEESWAX
Honeybees create a structure within their nests called a honeycomb that is used to contain their larvae and also to store honey and pollen. The honeycomb comprises hexagonal cells made from wax.

54. Kilmer of “Top Gun” : VAL
Val Kilmer’s first big leading role in a movie was playing Jim Morrison in Oliver Stone’s 1991 biopic “The Doors”. A few years later, Kilmer was chosen for the lead in another big production, “Batman Forever”. Things haven’t really gone as well for Kilmer since then, I’d say. Off the screen, he flirted with the idea of running for Governor of New Mexico in 2010. A Hollywood actor as a Governor? Would never happen …

“Top Gun” is an entertaining action movie released in 1986 starring Tom Cruise and the lovely Kelly McGillis. The movie is all about pilots training at the US Navy’s Fighter Weapons School. A lot of footage was shot on board the Navy’s carrier the USS Enterprise during flight operations. At one point in a day’s shooting, the commander of the Enterprise changed course as needed for normal operations, but this altered the light for the cameras that were filming at the time. Director Tony Scott asked for the course to be changed back, but was informed that a course change would cost the Navy $25,000. Scott wrote out a check there and then, and he got another five minutes of filming with the light he needed.