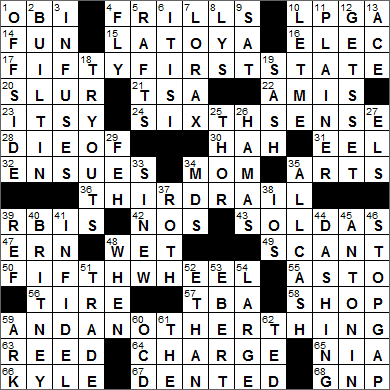 CROSSWORD SETTER: Jason Flinn
THEME: And Another Thing
Today’s themed answers are common phrases that refer to something that is one over the norm, ANOTHER THING as it were:

59A. Rant continuation … or a hint to this puzzle’s theme : AND ANOTHER THING …

Today’s Wiki-est, Amazonian Googlies
Across
1. Kimono closer : OBI
The sash worn as part of traditional Japanese dress is known as an obi. The obi can be tied in what is called a butterfly knot.

10. Org. for women taking courses? : LPGA
The Ladies Professional Golf Association (LPGA) was founded in 1950 by a group of 13 lady golfers, and today it is the oldest ongoing women’s sports professional organization in the US.

15. A Jackson sister : LA TOYA
La Toya Jackson was very close to her brother Michael, both in age and temperament. It seems to me that La Toya’s obsession with the plastic surgeon’s knife was second only to that of her younger brother.

16. Tesla power source: Abbr. : ELEC
Tesla Motors is a manufacturer of electric vehicles based in Palo Alto, California. Tesla is noted for producing the first electric sports car, called the Tesla Roadster. The current base price of a roadster is about $100,000, should you be interested …

21. They’ll check your bag at the airport, for short : TSA
The Transportation Security Administration (TSA) was created in 2001, soon after the 9/11 attacks. TSA personnel carry out the baggage and body searches at US airports. The TSA has a Trusted Traveler program that allows certain passengers to move more quickly through security screening. These passengers pay the TSA a one-time fee that covers a background check after which successful applicants are issued a Known Traveler Number (KTN).

31. Sashimi selection : EEL
“Sashimi” is thinly sliced raw fish, although it can also be raw meat. The word “sashimi” translates literally as “pierced body”, which may be a reference to the practice of sticking the tail and fin to sliced fish to identify it.

36. Power source for a subway train : THIRD RAIL (instead of the usual 2)
The first commercial uses of a third rail to power trains were actually in Ireland, with the Giant’s Causeway Tramway in 1883, and the Bessbrook and Newry Tramway in 1885.

47. Sea eagle : ERN
The ern (also erne) is sometimes called the white-tailed eagle, or the sea-eagle.

56. Oxymoronic purchase at a blowout sale? : TIRE
The word “oxymoron” is in itself an oxymoron, as it is derived from the Greek words “Oxys” and “moros” meaning “sharp” and “stupid”.

57. Up in the air, as what to air, for short : TBA
A TV network might as yet be unsure what to air in a particular timeslot. That choice is “up in the air”, to be advised (TBA).

68. Measure of econ. strength : GNP
A country’s Gross National Product (GNP) is the value of all services and products produced by its residents in a particular year. GNP includes all production wherever it is in the world, as long as the business is owned by residents of the country concerned. Gross Domestic Product (GDP) is different, although related, and is the value of all services and goods produced within the borders of the country for that year.

Down
1. In the wrong place at the wrong time? : OFFSIDE
That would be in a sport like football, or soccer perhaps.

5. Travels à la Huckleberry Finn : RAFTS
“The Adventures of Huckleberry Finn” by Mark Twain was first published in 1884, not here in the US but rather in England. The original launch planned for the US had to be delayed until 1885, because some rascal had defaced the plate for one of the illustrations, making an obscene joke. Once the problem was spotted a new plate had to be made, and 30,000 copies already printed had to be reworked to cover up the obscenity.

6. Formal response to “Who goes there?” : IT IS I
The much debated statement “it is I” is actually grammatically correct, and should not be “corrected” to “it is me”. Traditionally, pronouns following linking verbs, such as “is”, “appear” and “seem”, are written in the nominative case. Examples are:

7. Title Seuss character, with “the” : LORAX
“The Lorax” is a children’s book written by Dr. Seuss. It is an allegorical work questioning the problems created by industrialization, and in particular its impact on the environment. At one point in the story, the Lorax “speaks for the trees, for the trees have no tongues”. “The Lorax” was adapted into an animated film that was released in 2012, with Danny DeVito voicing the title character.

25. Avenger with a hammer : THOR
The hammer associated with the Norse god Thor is known as Mjölnir. The name “Mjölnir” translates as “crusher”.

26. Mideast group : HAMAS
Hamas is the Islamist political party that governs the Gaza Strip. “Hamas” translates into English as “enthusiasm”, and is also an acronym in Arabic for “Islamic Resistance Movement”. Hamas is classified as a terrorist organization by many nations in the world, including the US.

34. Scrip writers : MDS
“Scrip” is an informal term for a prescription.

39. Red card issuer, for short : REF
A series of colored penalty cards is used by referees and umpires in several sports, most notably in soccer. The cards were first used in the 1970 FIFA World Cup in Mexico, after language difficulties created confusion during the prior competition in 1966. The main cards used are a yellow card indicating a caution, and a red card indicating expulsion from the game.

40. Pop diva Spears : BRITNEY
Britney Spears was the best-selling female artist in the first decade of the 21st century. And I didn’t buy even one song, and I couldn’t name one right now …

41. Nonbeliever : INFIDEL
“Infidel” is an English word that was created by the Roman Catholic Church to describe someone who did not believe in the Catholic dogma. The word comes from Latin “infidelis” meaning “unfaithful”. During the time of the Crusades, the word “infidel” was used for any non-Christian, and particular the Saracens of North Africa.

44. Debonair : DASHING
Someone described as “debonair” is very courteous and gracious. The term comes into English via the French “debonaire”, which itself is derived from “de bon’ aire” meaning “of good race”, a phrase that originally applied to the breeding of hawks.

45. Late justice Scalia : ANTONIN
Antonin Scalia was appointed to the Supreme Court by President Reagan in 1986, and was the longest serving member of the court on the occasion of his passing in 2016. Justice Scalia’s minority opinions were known for the scathing language that he used to criticize the Court’s majority.

51. Quid pro quo : TRADE
“Quid pro quo” is Latin for “something for something”, a swap.

52. Allen who led the Green Mountain Boys : ETHAN
Ethan Allen was one of the founders of the state of Vermont. Allen was also a hero in the American Revolutionary War, famous for leading (along with Benedict Arnold) the small band of men known as the Green Mountain Boys that captured Fort Ticonderoga. And yes, the Ethan Allen store and furniture line is named for Ethan Allen the patriot, even though he had nothing to do with the furniture business.

53. He once asked “How far down can a thumb go?” : EBERT
Roger Ebert co-hosted a succession of film review television programs for over 23 years, most famously with Gene Siskel until Siskel passed away in 1999. Siskel and Ebert famously gave their thumbs up or thumbs down to the movies they reviewed.

62. Politico Cruz : TED
US Senator Ted Cruz served as Solicitor General for the state of Texas before heading to Washington. Cruz was appointed Solicitor General in 2003 at the age of 32, making him the youngest Solicitor General in the country. Famously, Cruz is an opponent of the Affordable Care Act and made a speech in 2013 in the US Senate on the subject that lasted for 21 hours and 19 minutes. It was the fourth longest speech in the history of the Senate.