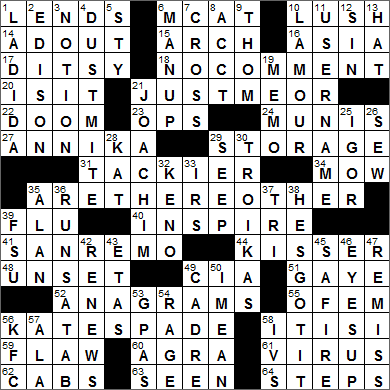 Our word “sot” comes from the Old English “sott”, meaning a fool. The word “sot” started to be associated with alcohol and not just foolery in the late 1500s.

14. Possible score before winning a game : AD OUT
In tennis, if the score reaches “deuce” (i.e. when both players have scored three points), then the first player to win two points in a row wins the game. The player who wins the point immediately after deuce is said to have the “advantage”. If the player with the advantage wins the next point then that’s two in a row and that player wins the game. If the person with the advantage loses the next point, then advantage is lost and the players return to deuce and try again. If the one of the players is calling out the score then if he/she has the advantage then that player announces “ad in” or more formally “advantage in”. If the score announcer’s opponent has the advantage, then the announcement is “ad out” or “advantage out”. Follow all of that …?

17. Like a dingbat : DITSY
The word “dingbat” has been used to mean a “fool” since the early 1900s. It became very popular after it was used repeatedly by Archie Bunker in the seventies TV show “All in the Family”.

22. Temple of ___ : DOOM
“Indiana Jones and the Temple of Doom” is the second in the series of “Indiana Jones” movies, although the story is written as a prequel to the first film, “Raiders of the Lost Ark”.

23. Saturn’s wife : OPS
Ops (also Opis) was the Roman equivalent of the Greek goddess Rhea. She was the wife of Saturn.

24. City bonds, informally : MUNIS
A municipal bond (muni) is one that is issued by a city or local government, or some similar agency. Munis have an advantage over other investments in that any interest earned on the bond is usually exempt from state and federal income taxes.

27. Golfer Sorenstam : ANNIKA
Annika Sorenstam is a Swedish golfer, perhaps the most successful female golfer ever. She made history in 2003 when she participated in a men’s PGA tour event, the first time that has happened since 1945.

39. ___ shot : FLU
Influenza (flu) is an ailment that is caused by a virus. The virus is readily inactivated by the use of soap, so washing hands and surfaces is especially helpful in containing flu outbreaks.

41. Italian Riviera resort : SAN REMO
The Italian city of San Remo sits on the Mediterranean, right on the border with France. In Italian the city is named Sanremo, just one word, although the spelling of “San Remo” dates back to ancient times.

“Mercy Mercy Me” is a 1971 Marvin Gaye song that bemoans the fate of the environment due to the ravages of man.

60. Site of one of the world’s most famous onion domes : AGRA
The Indian city of Agra is home to three UNESCO World Heritage Sites:

The onion dome is a common form for church domes in Russia and Orthodox churches across the globe.

62. Fleet on the street : CABS
A hansom cab is a very specific design of horse and buggy that was patented by Joseph Hansom in 1834 in England. The “cab” in the name is short for “cabriolet”, a prior design of carriage on which the hansom was based. It’s from “hansom cab” that we get our modern term “cab”.

Down
2. Westinghouse adversary : EDISON
George Westinghouse was an American engineer and businessman, a rival to Thomas Edison in developing the first robust electrical grid for the country. Edison’s approach was to distribute electrical power using DC current, but Westinghouse opted to partner with Nikola Tesla and worked with AC current. AC technology won the day!

4. Tiny creature that can trigger allergies : DUST MITE
According to the American Lung Association, about four out of five homes in the US have dust mites in at least one bed. Houses with carpets are more likely to have dust mites, as are homes in humid parts of the country. Dust mites can be eradicated from by exposing them to a temperature over 105 degrees C in a clothes dryer.

7. Pen name : CROSS
A. T. Cross is a company that claims to be the oldest manufacturer of fine pens. Cross was founded in 1846 in Providence, Rhode Island by one Richard Cross. Richard passed the company on to his son Alonzo T. Cross, who gave it the current name.

10. Dorothy of old “Road” films : LAMOUR
1940’s “Road to Singapore” was the first of the wonderful “Road” series of movies starring Bing Crosby, Bob Hope and Dorothy Lamour. The trio had great chemistry on screen but there was a bit of luck involved in bringing the three together. The movie was first offered to Fred MacMurray and Jack Oakie, and then to George Burns and Gracie Allen. Everyone declined the roles, with Gracie Allen even saying that she “thought the whole thing was silly”. The next tactic was to cast Dorothy Lamour who was riding a wave of popularity, but who could take the male leads? The studio decided to take a chance on pairing Hope and Crosby for the first time, and see how they did together. Arguably, Hope and Crosby became the most popular duo on the big screen in the history of cinema.

25. Composer Stravinsky : IGOR
The composer Igor Stravinsky’s most famous works were completed relatively early in his career, when he was quite young. His three ballets “The Firebird”, “Petrushka” and “The Rite of Spring” were published in 1910-1913, when Stravinsky was in his early thirties.

28. Kit ___ bar : KAT
I grew up eating Kit Kat bars as a kid, as the chocolate confection has been around since the thirties. Kit Kats didn’t hit the shelves in the US until the seventies. I’ve seen new varieties of Kit Kat over in the UK, such as an orange-flavored version, but haven’t seen anything like that over here.

30. Three-horse carriages : TROIKAS
“Troika” is a Russian word meaning “set of three”. “Troika” can apply to a sled or carriage drawn by three horses, or to a folk dance between one man and two women. The term might also apply to a triumvirate of political leaders.

32. Lotto variant : KENO
The name “Keno” has French or Latin roots, with the French “quine” being a term for five winning numbers, and the Latin “quini” meaning “five each”. The game originated in China and was introduced into the West by Chinese immigrants who were working on the first Transcontinental Railroad in the 1800s.

33. Department of the Treasury dept. : IRS
The Internal Revenue Service (IRS) was set up during the Civil War to raise money to cover war expenses. Prior to the introduction of income tax in 1862, the government was funded by levies on trade and property.

35. Jackson with 13 #1 country albums : ALAN
Alan Jackson is a country music singer, and a bit of an author too. Jackson married his high school sweetheart in 1979, but they had a parting of the ways about twenty years later due to the pressures on the marriage from Jackson’s career. The pair reconciled, and Jackson wrote a book describing the relationship he has with his wife and his commitment to Christianity. The book is called “It’s All About Him: Finding the Love of My Life”, and it topped the New York Times Bestseller List.

36. Doesn’t pay immediately : RUNS A TAB
When we “run a tab” at a bar say, we are “running a tabulation”, a listing of what we owe. Such a use of “tab” is American slang that originated in the 1880s.

38. Approving remark after “By Jove …” : HE’S GOT IT
“By Jove” is a mild oath, calling on the Roman god Jove, also known as Jupiter.

39. Sch. of 2013 Heisman Trophy winner Jameis Winston : FSU
Florida State University (FSU) is located in Tallahassee, the state capital of Florida. The school’s athletic teams are known as the Seminoles (sometimes “the ‘Noles”). The team name was chosen in 1947 by the students in a vote, and alludes to the Seminole people who originally lived in the state. Most of the Seminole now live in Oklahoma, after their forced relocation by the US government in the 1840s.

Jameis Winston is a multi-talented athlete who plays both football and baseball for Florida State. In 2013, Winston became the youngest player to win the Heisman Trophy.

43. They may be delayed by weather, for short : ETAS
Estimated time of arrival (ETA)

45. Wordsmith who wrote “Last but not least, avoid clichés like the plague” : SAFIRE
William Safire was a syndicated columnist for the New York Times. He also worked for the Nixon election campaigns in 1960 and 1968, and was a speechwriter for both Richard Nixon and Spiro Agnew.

49. Training group : CADRE
A “cadre” is most commonly a group of experienced personnel at the core of a larger organization that the small group trains or heavily influences. “Cadre” is a French word meaning a “frame”. We use it in the sense that a cadre is a group that provides a “framework” for the larger organization.

56. Company with a bucket list? : KFC
The famous “Colonel” of Kentucky Fried Chicken fame was Harland Sanders, an entrepreneur from Henryville, Indiana. Although not really a “Colonel”, Sanders did indeed serve in the military. He enlisted in the Army as a private in 1906 at the age of 16, lying about his age. He spent the whole of his time in the Army as a soldier in Cuba. It was much later, in the 1930s, that Sanders went into the restaurant business making his specialty deep-fried chicken. By 1935 his reputation as a “character” had grown, so much so that Governor Ruby Laffoon of Kentucky gave Sanders the honorary title of “Kentucky Colonel”. Later in the fifties, Sanders developed his trademark look with the white suit, string tie, mustache and goatee. When Sanders was 65 however, his business failed and in stepped Dave Thomas, the founder of Wendy’s. Thomas simplified the Sanders menu, cutting it back from over a hundred items to just fried chicken and salads. That was enough to launch KFC into the fast food business. Sanders sold the US franchise in 1964 for just $2 million and moved to Canada to grow KFC north of the border. He died in 1980 and is buried in Louisville, Kentucky. The Colonel’s secret recipe of 11 herbs and spices is indeed a trade secret. Apparently there is only one copy of the recipe, a handwritten piece of paper, written in pencil and signed by Colonel Sanders. Since 2009, the piece of paper has been locked in a computerized vault surrounded with motion detectors and security cameras.