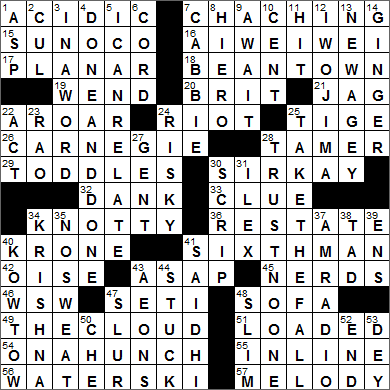 Today’s Wiki-est, Amazonian Googlies
Across
15. Ultra 93 vendor : SUNOCO
Back in the late 1800s, Sunoco was known as the Sun Oil Company.

16. Winner of the inaugural Václav Havel Prize for Creative Dissent (2012) : AI WEIWEI
Ai Weiwei is a Chinese artist who has been vocal in his criticism of his country’s position on human rights and democracy. Wei Wei was an artistic consultant largely responsible for the look and feel of the Beijing National Stadium, commonly referred to as the “Bird’s Nest”, that was showcased during the 2008 Summer Olympics.

18. The Hub : BEANTOWN
In the days of sail, the natural trade routes across the Atlantic involved a lot of ships arriving in Boston directly from West Indies. One of the main cargoes carried by these vessels coming from the West Indies was molasses. An abundance of cheap molasses led to an abundance of baked beans in the port city, and all those baked beans gave rise to Boston’s nickname “Beantown”.

One of the nicknames for the city of Boston is “The Hub”, short for “The Hub of the Universe”. In 1858, Oliver Wendell Holmes referred to the Massachusetts State House Building in Boston as the “Hub of the Solar System”, and the idea stuck.

21. Ferrari rival, informally : JAG
Jaguar started out as a manufacturer of sidecars for motorcycles back in 1922, when the company was known as the Swallow Sidecar Company (SS for short). The company changed its name to Jaguar after WWII, because of the unfortunate connotations of the letters “SS” at that time.

Enzo Ferrari was an Italian race car driver, and founder of the Ferrari car manufacturing company. Ferrari died in 1988, and in 2003 the company named the Enzo Ferrari model after its founder.

26. Steel-eyed one? : CARNEGIE
Andrew Carnegie was an industrialist and philanthropist from Scotland who made his fame and fortune in the US steel industry. He founded the Carnegie Steel Company in 1892, which was destined to become US Steel. After he sold Carnegie Steel, making his fortune, Carnegie devoted the rest of his life to philanthropy. Famously, he built Carnegie Hall in New York, founded Carnegie Mellon University in PIttsburgh, and set up several charitable trust funds that are still doing valuable work today.

40. Coin with a hole in it : KRONE
“Krone” translates into English as “crown”, and was the name given to coins that bore the image of the monarch. Today, the krone is the name given to the currency of Norway and of Denmark. Some of the Norwegian and Danish kroner have holes in the middle, giving them a “doughnut” or “torus” shape.

41. First substitute on a basketball bench : SIXTH MAN
Basketball is truly an American sport. It was created in 1891 by a James Naismith at the YMCA in Springfield, Massachusetts. His goal was to create something active and interesting for his students in the gym. The first “hoops” were actually peach baskets, with the bottoms of the baskets intact. When a player got the ball into the “net”, someone had to clamber up and get the ball back out again in order to continue the game!

Auvers-sur-oise is in effect a suburb of Paris now, lying just 17 miles from the center of the city. By the time Van Gogh moved there, he was quite ill and in poor mental health. The reason he moved to Auvers was to be treated by one Dr. Paul Gachet who became a good friend, as well as the subject in two of Van Gogh’s portraits. Van Gogh shot himself in the chest in a field in Auvers in 1890, and managed to walk back to the Ravoux Inn where he was staying. Sadly, he died from his wounds two days later.

43. Chop-chop : ASAP
“Chop chop” is Chinese Pidgin English, and is just a reiteration of the word “chop” used in the sense of moving quickly.

47. “The X-Files” program, for short : SETI
SETI is the name given to a number of projects that are searching for extraterrestrial life. The acronym stands for “search for extraterrestrial intelligence”. One of the main SETI activities is the monitoring of electromagnetic radiation (such as radio waves) reaching the Earth in the hope of finding a transmission from a civilization in another world.

“The X-Files” is a very successful science fiction show that aired on the Fox network from 1993 to 2002. The stars of the show are David Duchovny (playing Fox Mulder) and the very talented Gillian Anderson (playing Dana Scully). By the time the series ended, “The X-Files” was the longest running sci-fi show in US broadcast history.

49. Modern storage space : THE CLOUD
In the world of computing, when one operates “in the cloud”, one’s files and key applications are not stored on one’s own computer, but rather are residing “in the cloud”, on a computer(s) somewhere out on the Internet. I do 90% of my computing in the cloud. That way I don’t have to worry about backing up files, and I can operate from any computer if I have to. In fact, I am working in the cloud right now as I type up this post …

54. How Columbo often worked : ON A HUNCH
“Columbo” is a police drama that aired from 1971-78, with some more episodes made as recently as 2003. Columbo was of course played by Peter Falk, although the character of Columbo was first played by Bert Freed in 1960 in an episode of “The Chevy Mystery Show”. That first appearance was so successful that the episode was adapted for the stage in 1962, with Thomas Mitchell taking on the role. Then the same episode was stretched into a TV movie in 1968, with Peter Falk playing Lt. Columbo for the first time.

7. Hack : CABBIE
Hackney is a location in London, and it probably gave it’s name to a “hackney”, an ordinary type of horse around 1300. By 1700 a “hackney” was a person hired to do routine work, and “hackneyed” meant “kept for hire”. This morphed into a hackney carriage, a carriage or car for hire, and into “hack”, a slang term for a taxidriver.

8. Sacred: Prefix : HIERO-
The prefix hiero-comes from the Greek word “hieros” meaning sacred or holy. The classic use of the prefix is in the term “hieroglyphics”, meaning “sacred carving”, the writing system that uses symbols and pictures.

10. 50 ___ : CENT
Rap star 50 Cent’s real name is Curtis James Jackson III, and is from South Jamaica in Queens, New York. 50 Cent had a rough life starting out, first dealing drugs at the age of 12. He dropped his illegal activities to pursue a rap career, but still fell victim to an assailant who pumped nine bullets into him. The alleged shooter was himself shot three weeks later, and died. 50 Cent’s alleged attacker was a bodyguard and close friend of Mike Tyson.

12. It means “sulfur island” in Japanese : IWO JIMA
Iwo Jima is a volcanic island located south of Tokyo that today is uninhabited. The name is Japanese for “Sulfur Island”, referring to the sulfur mining on which Iwo Jima’s economy once depended. There were about a thousand Japanese civilians living on the island prior to WWII. In 1944, there was a massive influx of Japanese military personnel in anticipation of the inevitable US invasion. As the Japanese military moved in, the civilians were forced out and no one has lived there since.

23. Indian novelist Raja ___ : RAO
Raja Rao was an Indian writer, but one who wrote and published mainly in English. His much acclaimed 1960 novel “The Serpent and the Rope” is largely autobiographical. Rao spent the last decades of life living in the US.

30. Faux money : SCRIP
“Scrip” isn’t legal tender, but operates just like currency in specific applications. It is in effect a form of credit. Originally the word “scrip” was used for a certificate giving one the right to receive something, often shares of a stock. “Scrip” is probably short for (sub)script(ion) receipt.

31. Holly : ILEX
Ilex, commonly known as holly, is a genus of hundreds of species of flowering plants. The holly used for Christmas decoration is Ilex aquifolium. The wood from the holly bush was once a favorite for construction of Scottish bagpipes, until dense tropical woods became readily available.

37. Rush home? : AM RADIO
Rush Limbaugh is a conservative talk radio host from Cape Girardeau, Missouri. “The Rush Limbaugh Show” is the most-listened-to talk radio program in the country with 15 million listeners tuning in each week.

38. Soupçon : TAD
Soupçon translates literally from French into English as “suspicion”, and can be used in the sense that a “suspicion” of something is a just a hint, a crumb.

40. Submit : KOWTOW
To kowtow is to show servile deference. “Kowtow” comes from the Chinese “k’o-t’ou” which is the name for the custom of kneeling and touching the forehead to the ground in a gesture of respect. The Chinese term literally translates as “knock the head”.

50. Revolutionary name : CHE
Ernesto “Che” Guevara was born in Argentina, and in 1948 he started to study medicine at the University of Buenos Aires. While at school he satisfied his need to “see the world” by taking two long journeys around South America, the story of which are told in Guevara’s memoir later published as “The Motorcycle Diaries”. While travelling, Guevara was moved by the plight of the people he saw and their working conditions and what he viewed as capitalistic exploitation. In Mexico City he met brothers Raul and Fidel Castro and was persuaded to join their cause, the overthrow of the US-backed government in Cuba. He rose to second-in-command among the Cuban insurgents, and when Castro came to power Guevara was influential in repelling the Bay of Pigs Invasion and bringing Soviet nuclear missiles to the island. Guevara left Cuba in 1965 to continue his work as a revolutionary. He was captured by Bolivian forces in 1967, and was executed. Fidel Castro led the public mourning of Guevara’s death, and soon the revolutionary was an icon for many left-wing movements around the world.