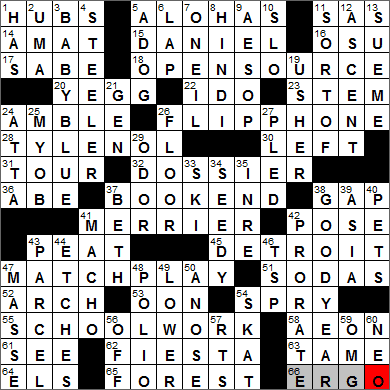 CROSSWORD SETTER: James Tuttle
THEME: Bookend … each of today’s themed answers is made from two words, each of which is often seen preceding the word BOOK:

37A. Shelf prop … or a hint to both parts of the answers to the six starred clues : BOOKEND

Today’s Wiki-est, Amazonian Googlies
Across
5. Greetings from Oahu : ALOHAS
The Hawaiian word “Aloha” has many meanings in English: affection, love, peace, compassion and mercy. More recently “aloha” has come to mean “hello” and “goodbye”, but only since the mid-1800s.

O’ahu has been called “The Gathering Place”, although the word “O’ahu” has no translation in Hawaiian. It seems that O’ahu is simply the name of the island. One story is that it is named after the son of the Polynesian navigator that first found the islands. The island is made up of two volcanoes, Wai’anae and Ko’olau, joined together by a broad valley, the O’ahu Plain.

11. Carrier in the Star Alliance : SAS
SAS was formerly known as Scandinavian Airlines System and is the flag carrier of three countries: Denmark, Norway and Sweden.

The Star Alliance was the airline industry’s first code-sharing alliance, created in 1997. The American founding representative is United Airlines.

16. The Cowboys of the Big 12 Conf. : OSU
The athletic teams of Oklahoma State University are called the Cowboys, and the Cowgirls.

17. Kemo ___ : SABE
“Kemosabe” is a term used by the Tonto character in the iconic radio and television program “The Lone Ranger”. “Kemosabe” doesn’t really mean anything outside of the show, and in fact was written as “ke-mo sah-bee” in the original radio show scripts. The term was created by longtime director of “The Lone Ranger”, Jim Jewell. To come up with the term, Jewell used the name of a boy’s camp that his father-in-law established called Kamp Kee-Mo Sah-Bee.

18. *Like software that can be freely used and altered : OPEN-SOURCE (“open book” & “sourcebook”)
A “sourcebook” is an original book, one that is used as a source for future study.

20. One with whom your safe is not safe : YEGG
“Yegg” is a slang word for a burglar and often for a safe-cracker. The origin of the term appears to be unknown.

26. *Samsung or LG product : FLIP PHONE (“flip book” & “phone book”)
I seem to be way behind the rest of the world. I don’t have a smartphone, or a calling plan. My pay-as-you-go LG flip phone costs me about 60 dollars a year. No Internet access on my phone, but I have a Kindle that gives me that. I am happy, easily pleased …

Aleve is a brand name for the anti-inflammatory drug Naproxen sodium.

31. Museum docent’s offering : TOUR
Museum docents are people who serve as guides for visitors to their institutions, usually providing their services for free. The term “docent” comes from the Latin “docere” meaning “to teach”.

32. F.B.I. file, e.g. : DOSSIER
A “dossier” is a collection of papers with information about a person or subject. “Dossier” is a French term meaning “bundle of papers”. The French word comes from the word “dos” meaning “back”. It is suggested that the term “dossier” arose as there was usually a label on the back (dos) of the bundle.

36. Prez on a fiver : ABE
The US five-dollar bill is often called an “Abe”, as President Lincoln’s portrait is on the front. An Abe is also referred to as a “fin”, a term that has been used for a five-pound note in Britain since 1868.

43. Bog fuel : PEAT
When dead plant matter accumulates in marshy areas, it may not fully decay due to a lack of oxygen or acidic conditions. We are familiar with this in Ireland, because this decaying matter can form peat, and we have lots and lots of peat bogs.

51. Fanta and Sprite : SODAS
The soft drink “Fanta” has quite an interesting history. As WWII approached, the Coca-Cola plant in Germany had trouble obtaining the ingredients it needed to continue production of the cola beverage, so the plant manager decided to create a new drink from what was available. The new beverage was built around whey (left over from cheese production) and pomace (left over after juice has been extracted from fruit). The inventor asked his colleagues to use their imagination (“Fantasie” in German) and come up with a name for the drink, so they piped up “Fanta!”

52. One of a pair in a fast-food logo : ARCH
The original McDonald’s restaurant was opened in 1940 by Richard and Maurice McDonald as a barbecue restaurant. The brothers then moved into fast food hamburgers, eventually selling out to one of their franchise agents, Ray Kroc. It was Ray Kroc who really led the company to its worldwide success.

53. Suffix with bass : -OON
Our modern bassoon first appeared in the 1800s and has had a place in the concert orchestra ever since.

65. “Bambi” setting : FOREST
The 1942 Disney classic “Bambi” is based on a book written by Felix Salten called “Bambi, A Life in the Woods”. There is a documented phenomenon known as the Bambi Effect, whereby people become more interested in animal rights after having watched the scene where Bambi’s mother is shot by hunters.

66. Start of a conclusion : ERGO
“Ergo” is the Latin word for “hence, therefore”.

Down
2. Thurman of “Kill Bill” : UMA
Robert Thurman was the first westerner to be ordained a Tibetan Buddhist monk. Robert raised his children in the Tibetan Buddhist tradition and called his daughter “Uma” as it is a phonetic spelling of the Buddhist name “Dbuma”. Uma’s big break in movies came with her starring role in Quentin Tarantino’s 1994 hit “Pulp Fiction”. My favorite Uma Thurman film is the wonderful 1996 romantic comedy “The Truth About Cats and Dogs”.

3. *Like many a heartthrob’s eyes : BABY BLUE (“baby book” & “blue book”)
I think we tend to associate the term “blue book” with the Kelley Blue Book that provides valuations for vehicles. The term itself dates back to the 15th century when we started calling an almanac or other publication full of information a “blue book”.

7. Baseball great Buck : O’NEIL
Buck O’Neil was a first baseman and manager with the Kansas City Monarchs, a team in the Negro American League.

13. “Guys and Dolls” song whose title follows “Call a lawyer and …” : SUE ME
“Guys and Dolls” is a musical with music and lyrics by Frank Loesser. It was first produced on Broadway, in 1950, and ran for 1200 performances. The show was based on a book written by Jo Swerling and Abe Burrows. “Guys and Dolls” was chosen as winner of a Pulitzer in 1951, but the award was cancelled as Abe Burrows was having problems with the House Un-American Activities Committee at the time.

25. Rebuke to an eavesdropper, for short : MYOB
Mind Your Own Business! (MYOB)

34. Run-down : SEEDY
We use the word “seedy” to mean “shabby”. The usage probably arose from the appearance of a flowering plant that has gone to seed.

37. “Little Women” woman : BETH
“Little Women” is a novel written by American author Louisa May Alcott. The quartet of little women is Meg, Jo, Beth and Amy March. Jo is a tomboy and the main character in the story, and is based on Alcott herself.

39. Home to the Himalayas : ASIA
The magnificent Himalaya range of mountains in Asia takes its name from the Sanskrit for “abode of snow”. Geographically, the Himalayas separate the Indian subcontinent from the Tibetan Plateau to the north.

41. Full of swagger, say : MACHO
A man described as “macho” shows pride in his masculinity. “Macho” is a Spanish word for “male animal”.

47. Shot for those who have mastered English? : MASSE
In billiards, a massé shot is one in which the cue ball makes an extreme curve due to the player imparting heavy spin on the ball with his or her cue.

In my misspent youth, I’d play a little snooker. When deliberately placing side spin on the cue ball, we Irish (and British) players would simply say “I put some ‘side’ on that shot”. The term used over here in the US for the same shot is putting “english” on the ball. Ironically, the term “english” comes from the French “anglé” meaning “angled”. “Anglé” sounds exactly like the word “Anglais”, which is French for “English”. There you have it …

48. Vaccine target : POLIO
In the fifties, especially after the 1952 epidemic, polio was the biggest health fear in the US because it killed thousands, left even more with disabilities and most of the victims were children. The situation was dire and the authorities immediately quarantined the family of any polio victim, and that quarantine was so strict that in many cases the families were not even permitted to attend the funeral of a family member who died from the disease.

54. 32-card game : SKAT
When I was a teenager in Ireland, I had a friend with a German father. The father taught us the game of Skat, and what a great game it is. Skat originated in Germany in the 1800s and is to this day the most popular card game in the country. I haven’t played it in decades, but would love to play it again …

60. Prefix with colonial : NEO-
Neocolonialism is a the practice of one country influencing another by using economic and political power, rather than military might.