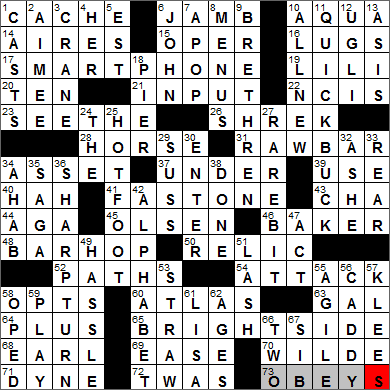 CROSSWORD SETTER: Gary Cee
THEME: Clever at the Beginning … each of today’s themed answers starts with a synonym of “clever”.

17A. Samsung Galaxy or BlackBerry : SMARTPHONE
41A. Devious trick : FAST ONE
65A. What an optimist always looks on : BRIGHT SIDE
11D. Easily made profit : QUICK BUCK
36D. Abrupt left or right : SHARP TURN

Today’s Wiki-est, Amazonian Googlies
Across
1. Secret stash : CACHE
A “cache” is a secret supply. We imported the term into English from French Canadian trappers in the 17th century. Back then, “cache” was as slang term for a “hiding place for stores”, derived from the French verb “cacher” meaning “to hide”.

6. Doorframe’s vertical part : JAMB
A door or window jamb is the vertical portion of the frame. The term “jamb” comes from the French word “jambe” meaning “leg”.

14. Buenos ___ : AIRES
Buenos Aires is the capital of Argentina, located on the estuary of the Ria de la Plata. As a port city, the people of Buenos Aires are known as porteños (“people of the port”).

17. Samsung Galaxy or BlackBerry : SMARTPHONE
The Galaxy is a series of mobile computing devices made by Samsung that was introduced in 2009.

The beautiful and talented French actress and dancer Leslie Caron is best known for her appearances in the classic Hollywood musical films “An American in Paris”, “Lili” and “Gigi”. Although I love the movie “Gigi”, my favorite of her performances is in the comedy war drama “Father Goose” in which she played opposite Cary Grant. Caron has danced with the best, including Gene Kelly, Fred Astaire, Mikhail Baryshnikov and Rudolf Nureyev.

20. Number after Big or top : TEN
The Big Ten is the nation’s oldest Division I college athletic conference and today is comprised of not ten, but twelve colleges mainly located in the Midwest. The conference was founded in 1896 and earned the name “Big Nine” in 1899 when Iowa and Indiana joined to bring the number of teams in the conference to nine. The conference name was changed to the Big Ten after Michigan rejoined in 1917. Right after WWII, the University of Chicago dropped out so the conference became known as the Big Nine again until 1949. The official designation of “Big Ten” was adopted in 1987 when the conference (once again with with a complement of ten teams) registered as a not-for-profit corporation. It was decided to keep the official name of Big Ten when Penn State joined in 1990 bringing the number of schools to the level of eleven, and even when the University of Nebraska-Lincoln joined in 2011 as the twelfth team.

22. CBS police drama that debuted in 2003 : NCIS
NCIS is the Naval Criminal Investigative Service, which investigates crimes in the U.S. Navy and Marine Corps. The service gives its name to the CBS TV show “NCIS”, a spin-off drama from “JAG” in which the main “NCIS” characters were first introduced. The big star in “NCIS” is the actor Mark Harmon.

26. Green ogre of film : SHREK
Before “Shrek” was a successful movie franchise and Broadway musical, it was a children’s picture book called “Shrek!” authored and illustrated by William Steig. The title “Shrek!” came from the German/Yiddish word Schreck, meaning “fear” or “terror”.

43. When repeated, a Latin dance : CHA
The cha-cha-cha is a Latin dance with origins in Cuba, where it was introduced by composer Enrique Jorrin in 1953.

44. Turkish official : AGA
“Aga” (also “agha”) is a title that was used by both civil and military officials in the Ottoman Empire.

45. Jimmy who works with Lois Lane : OLSEN
In the Superman stories, Jimmy Olsen is a cub photographer who works on the “Daily Planet” newspaper with Clark Kent and Lois Lane.

Lois Lane has been the love interest of Superman/Clark Kent since the comic series was first published in 1938. Lois and Clark both work for the big newspaper in the city of Metropolis called “The Daily Planet”. The couple finally got hitched in the comics (and on television’s “Lois and Clark”) in 1996. But never mind all that … one has to wonder how good the crossword is in “The Daily Planet” …

68. ___ of Sandwich : EARL
Meats placed between slices of bread was first called a sandwich in the 18th century, named after the Fourth Earl of Sandwich. The Earl was fond of eating “sandwiches” while playing cards at his club.

70. Witty Oscar : WILDE
If you didn’t know Oscar Wilde was Irish, you will when you see the name he was given at birth: Oscar Fingal O’Flahertie Wills Wilde!

71. Unit of force : DYNE
An erg is a unit of energy or mechanical work. “Erg” comes from the Greek word “ergon” meaning “work”. A dyne is a unit of force. The name “dyne” comes from the Greek “dynamis” meaning “power, force”. Ergs and dynes are related to each other in that one erg is the amount of energy needed to move a force of one dyne over a distance of one centimeter.

72. “___ the night before Christmas …” : ‘TWAS
The poem “A Visit from St. Nicholas” was published anonymously in 1823, and is better known today by its first line “‘Twas the night before Christmas”. Most scholars believe that the poem was written by Clement Clarke Moore, a theologian from New York City. Others say that it was written by Henry Livingston, Jr. a poet from Upstate New York.

Down
2. ‘Til Tuesday singer Mann : AIMEE
Aimee Mann is an American rock singer and guitarist.

4. “Tell Laura I Love ___” (1960 hit) : HER
“Tell Laura I Love Her” is a teenage tragedy song that was a hit for Ray Peterson in 1960, and also for Ricky Valence later the same year. The song tells the sad tale of young Tommy who is in love with Laura. Tommy enters a car race in the hope of winning money to buy Laura an engagement ring. Tommy’s car overturns and bursts into flames during the race. His last words are “Tell Laura I love her… My love for her will never die.”

12. Hybrid citrus fruit : UGLI
The ugli fruit is a hybrid of an orange and a tangerine, first discovered growing wild in Jamaica where most ugli fruit comes from today.

27. Melted cheese on toast : RAREBIT
Welsh rarebit is a delicious dish made using a cheese-flavored sauce served over toast. It may be that the name Welsh rarebit was originally a bit of an insult to the folks in Wales. The dish was called Welsh “rabbit” back in the 1700s. In those day’s rabbit was the poor man’s meat, and the implication of the dish’s name is that in Wales cheese was the poor man’s rabbit.

32. Tennis legend Arthur : ASHE
Arthur Ashe was a professional tennis player from Richmond, Virginia. In his youth, Ashe found himself having to travel great distances to play against Caucasian opponents due to the segregation that still existed in his home state. He was rewarded for his dedication by being selected for the 1963 US Davis Cup team, the first African American player to be so honored. Ashe continued to run into trouble because of his ethnicity though, and in 1968 was denied entry into South Africa to play in the South African Open. In 1979 Ashe suffered a heart attack and had bypass surgery, with follow-up surgery four years later during which he contracted HIV from blood transfusions. Ashe passed away in 1993 due to complications from AIDS. Shortly afterwards, Ashe was posthumously awarded the Presidential Medal of Freedom by President Bill Clinton.

34. Vengeful captain : AHAB
Captain Ahab is the obsessed and far from friendly Captain of the Pequod in Herman Melville’s “Moby Dick”.

42. Kindergarten learning : ALPHABET
“Kindergarten” is of course a German term, literally meaning “children’s garden”. The term was coined by the German education authority Friedrich Fröbel in 1837, when he used it as the name for his play and activity institute that he created for young children to use before they headed off to school. His thought was that children should be nourished educationally, like plants in a garden.

56. G.M. luxury car, informally : CADDY
The Cadillac Automobile Company was founded in 1902, as an independent company. The company was named for the French explorer Antoine Laumet de la Mothe, sieur de Cadillac. Cadillac founded the city of Detroit in 1701. The company was taken over by GM in 1909, and over the next thirty years GM did a great job establishing Cadillac as the luxury car one just had to own.

57. Some German/Swiss artworks in MoMA : KLEES
The artist Paul Klee was born in Switzerland, but studied art in Munich in Germany. You can see many of Klee’s works in the San Francisco Museum of Modern Art, and if you get to Bern in Switzerland, even more of them can be seen at the Zentrum Paul Klee that was opened in 2005.

66. Number of points scored by a safety : TWO
A “safety” is a play in American football, resulting in two points scored.