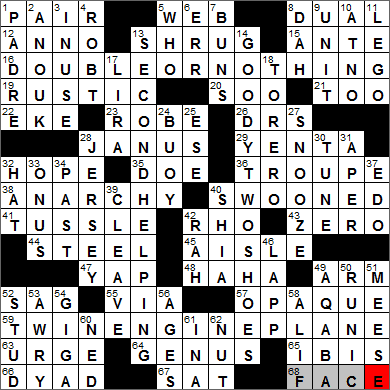 CROSSWORD SETTER: Douglas Taillon
THEME: 2 Answers … today’s themed answers relate to the number 2, and there’s even a “2” in the center of the grid drawn by black squares:

Today’s Wiki-est, Amazonian Googlies
Across
12. ___ Domini : ANNO
The designations Anno Domini (AD, “year of Our Lord”) and Before Christ (BC) are found in the Julian and Gregorian calendars. The dividing point between AD and BC is the year of the conception of Jesus, with AD 1 following 1 BC without a year “0” in between. The AD/BC scheme dates back to AD 525, and gained wide acceptance soon after AD 800. Nowadays a modified version has become popular, with CE (Common/Christian Era) used to replace AD, and BCE (Before the Common/Christian Era) used to replace BC.

15. Initial money for the pot : ANTE
The “pot” in a card game has been referred to as the kitty since the 1880s. It’s not certain how the name “kitty” evolved but possibly it came from “kit”, the necessary equipment for the game.

20. ___ Canals, Michigan/Ontario separator : SOO
In the summer of 2010 I spent a very interesting afternoon watching ships make their way through the Soo Locks and Soo Canal between Lake Superior and the lower Great lakes. The name “Soo” comes from the US and Canadian cities on either side of the locks, both called Sault Ste. Marie.

23. Kimono, e.g. : ROBE
The lovely Japanese kimono is a garment worn by men, women and children. The word “kimono” translates simply as “thing to wear”, with “ki” meaning “wear” and “mono” meaning “thing”.

38. Complete lawlessness : ANARCHY
Our word “anarchy”, used to describe a society without a publicly enforced government, comes from the Greek “an-” (without) and “arkhos” (leader).

42. Letter after pi : RHO
Rho is the Greek letter that looks just like our Roman letter “p”.

64. Canis, for dogs : GENUS
Biological classification is a method used to group organisms by biological type. The method uses a hierarchy of nested classes, with an organism being classified with reference to evolutionary traits. The major taxonomic ranks used are:

65. Wading bird : IBIS
The ibis is a wading bird that was revered in ancient Egypt. “Ibis” is an interesting word grammatically speaking. You can have one “ibis” or two “ibises”, and then again one has a flock of “ibis”. And if you want to go with the classical plural, instead of two “ibises” you would have two “ibides”!

68. One of a couple for the Roman god 28-Across : FACE
(28A. See 68-Across : JANUS)
Janus is a Roman god, usually depicted with two heads, one looking to the past and the other to the future. As such, as a god Janus is often associated with time.

Down
1. San Diego baseballer : PADRE
The San Diego Padres were founded in 1969. The Padres took their name from a Minor League team that had been in the the city since 1936. The name is Spanish for “fathers” and is a reference to the Franciscan Friars from Spain who founded San Diego in 1769.

2. Actress Aimée : ANOUK
Anouk Aimée is a French film actress. Aimée’s most famous film outside of France is probably the internationally successful 1966 French hit “A Man and a Woman”, in which she played the female lead.

4. Gen. ___ E. Lee : ROBT
Robert E. Lee is of course renowned as a southern officer in the Civil War. Lee was a somewhat reluctant participant in the war in that he opposed the secession of his home state of Virginia from the Union. At the beginning of the war, President Lincoln invited Lee to take command of the whole Union Army but he declined, choosing instead to stay loyal to his home state. During the Civil War, Lee’s men referred to him affectionately as “Marse Robert”, with “marse” being slang for “master”.

5. First of a journalist’s five W’s : WHO?
The Five Ws (or “Five Ws and one H”) is a journalistic concept used for gathering information. For a story to be complete, six questions need to be answered:

9. The “U” of B.T.U. : UNIT
In the world of heating, ventilation and air conditioning (HVAC), the power of a heating or cooling unit can be measured in British Thermal Units (BTUs). This dated unit is the amount of energy required to heat a pound of water so that the water’s temperature increases by one degree Fahrenheit.

11. Toy brick maker : LEGO
Lego is manufactured by Lego Group, a privately held company headquartered in Billund, Denmark. The company was founded by a carpenter called Ole Kirk Christiansen in 1934 and the now-famous plastic interlocking blocks were introduced in 1949. The blocks were originally sold under the name “Automatic Binding Bricks” but I think “Lego” is easier to remember! The name “Lego” comes from the Danish term “leg godt” meaning “play well”.

14. Someone who’s so nice you almost want to smack him : GOODY TWO-SHOES
The expression “goody two-shoes” is used for someone who is virtuous, but in a smug way. The term comes from a nursery tale published in 1765 called “The History of Goody Two-Shoes”. Goody Two-Shoes is the heroine of the tale, and isn’t smug at all. Instead she is a Cinderella-like character in a retelling of the Cinderella story.

17. Old Italian money : LIRA
The word “lira” is used in a number of countries for currency. “Lira” comes from the Latin for “pound” and is derived from a British pound sterling, the value of a Troy pound of silver. For example, the lira (plural “lire”) was the official currency of Italy before the country changed over to the euro in 2002.

18. Matador : TORERO
“Matador” is a Spanish word used in English for a bullfighter, although the term isn’t used in the same way in Spanish. The equivalent in Spanish is “torero”. “Matador” translates aptly enough as “killer”.

37. Old name for Tokyo : EDO
Edo is the former name of the Japanese city of Tokyo. Edo was the seat of the Tokugawa shogunate, a feudal regime that ruled from 1603 until 1868. The shogun lived in the magnificent Edo castle. Some parts of the original castle remain and today’s Tokyo Imperial Palace, the residence of the Emperor of Japan, was built on its grounds.

40. Actor LaBeouf : SHIA
Shia LaBeouf is an actor who started out in the Disney television series “Even Stevens”. Adult audiences might be more familiar with his leading role in the 2003 film “Holes”.

46. Northern Scandinavian : LAPP
Lapland is a geographic region in northern Scandinavia, largely found within the Arctic Circle. Parts of Lapland are in Norway, Sweden and Finland. The people who are native to the region are called the Sami people. The Sami don’t like to be referred to as “Lapps” and they regard the term as insulting.

49. Jordanian port : AQABA
The coastal city of Aqaba is the only seaport in the country of Jordan. The city lies at the very northern tip of the Gulf of Aqaba, which is off the Red Sea.

50. Like Old Norse writing : RUNIC
A rune is a character in an alphabet that is believed to have mysterious powers. In Norse mythology, the runic alphabet was said to have a divine origin.

51. Reagan attorney general Edwin : MEESE
Ed Meese was born in Oakland, California just down the road here and spent 24 years in the office of the Treasurer of Alameda County, the county in which I live. After military service, Meese earned himself a law degree at UC Berkeley. Later, as Chief of Staff for President Reagan, he was instrumental in a famous decision to crack down on student protesters at Berkeley which resulted in one protester dying and a two-week occupation of the city by the California National Guard.

52. Macho guy : STUD
The word “stud”, meaning “a male horse kept for breeding”, is derived from the Old English word “stod”, which described a whole herd of horses.

58. First Arabic letter : ALIF
“Alif” is the first letter in the Arabic Semitic alphabet, equivalent to the Hebrew “aleph”.

60. Beatty of “Superman” : NED
Ned Beatty is probably best remembered for the rather disturbing “squeal like a pig” scene in the movie “Deliverance”. Beatty also earned an Academy Award nomination for Best Supporting Actor for his performance in the 1976 movie “Network”.