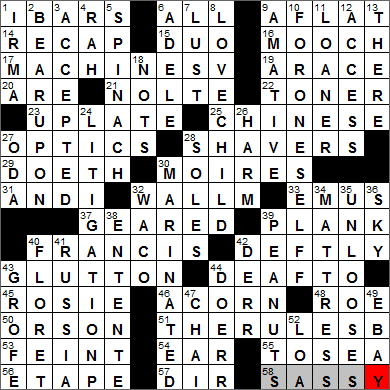 CROSSWORD SETTER: Todd Gross
THEME: Letter Ending First … to make sense of today’s themed clues we take the last letter in the answer, add the suffix -ENDING, and then place the resulting word at the beginning of the answer. Complicated …

17A. Food or drink dispensers : VENDING MACHINES (MACHINES with V-ending)
32A. Robert Frost poem that includes “Good fences make good neighbors” : MENDING WALL (WALL with M-ending)
51A. Taking liberties : BENDING THE RULES (THE RULES with B-ending)
10D. Going without help : FENDING FOR ONESELF (FOR ONESELF with F-ending)
24D. Future court case : PENDING LITIGATION (LITIGATION with P-ending)

21. Nick of “The Deep” : NOLTE
The actor Nick Nolte got his first big break playing opposite Jacqueline Bisset and Robert Shaw in “The Deep”, released in 1976. Prior to that he had worked as a model, and in fact appeared in a magazine advertisement for Clairol in 1972 alongside fellow model, Sigourney Weaver.

“The Deep” is a 1977 film that is based on a novel by Peter Benchley (who also wrote “Jaws”). “The Deep” stars Robert Shaw, Nick Nolte and a very attractive Jacqueline Bisset.

22. Kind of cartridge : TONER
The key features of a laser printer (or copier) are that it uses plain paper and produces quality text at high speed. Laser printers work by projecting a laser image of the printed page onto a rotating drum that is coated with photoconductors (material that becomes conductive when exposed to light). The areas of the drum exposed to the laser carry a different charge than the unexposed areas. Dry ink (toner) sticks to the exposed areas due to electrostatic charge. The toner is then transferred to paper by contact and is fused into the paper by the application of heat. So, that explains why paper coming out of a laser printer is warm, and sometimes powdery …

25. Like virtually all gold medalists in Olympic table tennis : CHINESE
Ping-pong is called table tennis in the UK, where the sport originated in the 1880s. Table tennis started as an after-dinner activity among the elite, and was called “wiff-waff”. To play the game, books were stacked in the center of a table as a “net”, two more books served as “”rackets” and the ball used was actually a golf ball. The game evolved over time with the rackets being upgraded to the lids of cigar boxes and the ball becoming a champagne cork (how snooty is that?). Eventually the game was produced commercially, and the sound of the ball hitting the racket was deemed to be a “ping” and a “pong”, giving the sport its alternative name.

30. Shimmery silks : MOIRES
A moiré pattern is a phenomenon in physics, a so-called interference pattern. If you lay two sheets of mesh over each other for example, slightly offset, then what you see is a moiré pattern. “Moiré” is the French name for a textile that we know simply as “moire”. The rippled pattern of the textile resembles that of the interference pattern.

31. “You ___” (2011 Lady Gaga song) : AND I
Lady Gaga is the stage name of singer Stefani Germanotta from New York City. I’ve seen Lady Gaga interviewed on television a few times, and she sure is “unique”. Her music is of course out of my league, but she does know how to put on a show.

33. Three-toed runners : EMUS
The emu has had a tough time in Australia since man settled there. There was even an “Emu War” in Western Australia in 1932 when migrating emus competed with livestock for water and food. Soldiers were sent in and used machine guns in an unsuccessful attempt to drive off the “invading force”. The emus were clever, breaking their usual formations and adopting guerrilla tactics, operating as smaller units. After 50 days of “war”, the military withdrew. Subsequent requests for military help for the farmers were ignored. The emus had emerged victorious …

39. Yoga pose that strengthens the abs : PLANK
Yoga’s plank pose involves holding one’s body as though one is at the top of a push-up.

40. Pope who declared “I am a sinner. This is the most accurate definition” : FRANCIS
Pope Francis was elected on 13 March 2013 as the 266th Bishop of Rome and leader of the Roman Catholic church. The new pope appears to be taking a much simpler approach to the office, as he has done with his life back in Argentina. He is the first pope since 1903 not to reside in the papal residence, choosing to live instead to live in the less lavish Vatican guesthouse.

50. Sci-fi novelist ___ Scott Card : ORSON
Orson Scott Card is a science fiction author (mainly). Card’s most famous work is his novel “Ender’s Game” first published in 1985. “Ender’s Game” was adapted into a movie and released in 2013, with a cast that includes Harrison Ford.

When Gene Roddenberry first proposed the science fiction series that became “Star Trek”, he marketed it as “Wagon Train to the Stars”, a pioneer-style Western in outer space. In fact his idea was to produce something more like “Gulliver’s Travels”, as he intended to write episodes that were adventure stories on one level, but morality tales on another. Personally I think that he best achieved this model with the spin-off series “Star Trek: The Next Generation”. If you watch individual episodes you will see thinly disguised treatments of moral issues such as racism, homosexuality, genocide etc. For my money, “The Next Generation” is the best of the whole franchise …

56. Tour de France stage : ETAPE
“Étape” is the French word for stage, as in a “stage” in the Tour de France. It is used in English military circles to describe where troops halt overnight, but can also describe the section of the march itself. So, a march can be divided into stages, into étapes.

5. Ingredient in Florentine dishes : SPINACH
Catherine de’ Medici was an Italian noblewoman who became Queen consort of France in 1547 as wife of King Henry II. Catherine was very fond of spinach, and so had it served at every meal. Catherine hailed from Florence, and to this day dishes that are made with spinach are referred to as “Florentine”, reflecting Catherine’s city of birth.

6. “Someone Like You” singer : ADELE
Adele is the stage name of English singer Adele Adkins. Adele’s debut album is “19”, named after the age she was during the album’s production. Her second album was even more successful than the first. Called “21”, the second album was released three years after the first, when Adele was three years older.

7. Hircosity : LUST
“Hircosity” is an obscure term meaning “goatishness”. The adjective “hircine” is used for anything that has the characteristics of a goat, especially a strong odor, or lustful behavior.

8. 1968 #1 hit for the Supremes : LOVE CHILD
“Love Child” is a 1968 hit released by Diana Ross & the Supremes. The song caused a bit of a fuss back then as the title refers to a child born out of wedlock.

The Supremes were the most successful vocal group in US history, based on number one hits. The group started out in 1959 as a four-member lineup called the Primettes. The name was changed to the Supremes in 1961. One member dropped out in 1962, leaving the Supremes as a trio. Lead singer Diana Ross began to garner much of the attention, which eventually led to a further name change, to Diana Ross & the Supremes.

18. Forget-me-___ : NOTS
The plants known as forget-me-nots were given their distinctive name first in French, namely “ne m’oubliez pas”. “Forget-me-not” is simply a translation into English.

32. Where Snickers, Skittles and Starburst are manufactured : WACO
Snickers is a candy bar made by Mars. When I was growing up in Ireland, the same candy bar was sold as a Marathon. The name was changed in Europe to Snickers in 1990. 75% of the world’s Snickers bars are made in the Mars factory in Waco, Texas.

38. Diplomatic agreement : ENTENTE
An “entente cordiale” is a friendly understanding, usually between two nations. The term, which translates from French as “cordial agreement”, was first used to describe a set of agreements between the UK and France in 1904.

41. Don’s place : RUSSIA
The Don is a major river in Russia. It rises about 40 miles southeast of Moscow and them flows over 1,200 miles to empty into the Sea of Azov.

42. Charlie Chan’s creator Earl ___ Biggers : DERR
Charlie Chan is the main character in a series of novels by Earl Derr Biggers. Chan is a Chinese-American detective working with the Honolulu police department. There have been almost 50 movies made featuring the Charlie Chan character.

43. “Grand Canyon Suite” composer : GROFE
Ferde Grofé was a composer from New York City. Grofé was famous as a musical arranger. His most famous orchestral arrangement is that of “Rhapsody in Blue”, which George Gershwin had written for two pianos. Grofé’s arrangement is the one that we hear most often today. Grofé also wrote his own compositions, the most famous being his 1931 work called “Grand Canyon Suite”.

44. Red Sox Hall-of-Famer Bobby : DOERR
Bobby Doerr is a former baseball player and coach for the Boston Red Sox. Doerr attended the 100th anniversary celebration of Fenway Park in 2012. He was 94 years of age at the time, and was the oldest person in attendance that day at the park.

47. Tea type : CHAI
Chai is a drink made from spiced black tea, honey and milk, with “chai” being the Hindi word for “tea”. We often called tea “a cup of char” growing up in Ireland, with “char” being our slang word for tea, derived from “chai”.

49. Company with a 1998 Nasdaq I.P.O. that hired its first employee in 1996 : EBAY
eBay was founded in 1995 as AuctionWeb as part of a computer programmer’s personal website. One of the first items purchased was a broken laser pointer, for $14.83. The buyer collected broken laser pointers …

52. Mauna ___ : LOA
Mauna Loa on the “big island” of Hawaii is the largest volcano on the planet (in terms of volume). The name “Mauna Loa” is Hawaiian for “Long Mountain”.