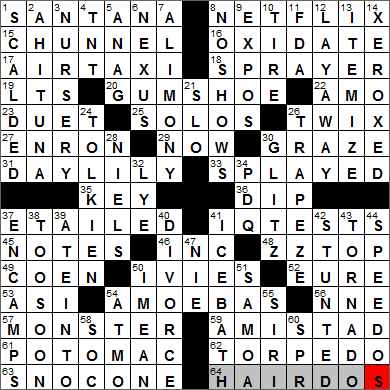 8. It sends out lots of streams : NETFLIX
Netflix was founded in Los Gatos, California in 1997. Although now focused on video streaming, the company delivered it’s billionth DVD in 2007. I presume the renter wasn’t charged for that movie …

15. Very long European link : CHUNNEL
The Channel Tunnel between the UK and France is also known familiarly as “the Chunnel”, and in French as “Le tunnel sous la Manche” (translating as “the tunnel under the English Channel”. The earliest credible proposal for a tunnel under the Channel was made in 1802. The plan was for the 1802 tunnel to be illuminated with oil lamps and for transportation to be provided by horse-drawn carriages. There was even a plan for an artificial island to be placed mid-Channel where horses would be changed.

16. Rust or combust : OXIDATE
Rust is iron oxide, and combustion is another term for oxidation, burning in air.

20. One who may be on your case : GUMSHOE
Gumshoe is a slang term for a private detective or private investigator (P.I.). Apparently the term “gumshoe” dates back to the early 1900s, and refers to the rubber-soled shoes popular with private detectives at that time.

26. Chocolate bar with a long biscuit and caramel : TWIX
I remember Twix bars from way back in 1967 when they were introduced in the British Isles. Twix bars made it to the US over a decade later, in 1979.

27. Subject of the 2003 book “Power Failure” : ENRON
After all the trials following the exposure of fraud at Enron, several of the key players ended up in jail. Andrew Fastow was the Chief Financial Officer. He plea-bargained and received ten years without parole, and became the key witness in the trials of others. Even Fastow’s wife was involved and she was sentenced to one year for helping her husband hide money. Jeffrey Skilling (ex-CEO) was sentenced to 24 years and 4 months. Kenneth Lay (CEO) died in 2006 after he had been found guilty but before he could be sentenced. The accounting firm Arthur Andersen was found guilty of obstruction of justice for shredding thousands of pertinent documents and deleting emails and files (a decision that the Supreme Court later overturned on a technicality). But still, Arthur Andersen collapsed under the weight of the scandal and 85,000 people lost their jobs (despite only a handful being directly involved with Enron).

31. Its flowers are very short-lived : DAYLILY
Daylilies are so called because the flowers of most species bloom early in the morning and then wither away during the following night. Sometimes a replacement bloom may appear on the same stalk the following morning.

37. Catered to Windows shoppers? : ETAILED
“Etail” is the term used these days for online shopping. Etail is often compared to regular shopping in the “real world” by juxtaposing it with a “brick and mortar” store.

48. Last band in the Rock and Roll Hall of Fame, alphabetically : ZZ TOP
In the blues rock band ZZ Top, the hairy guitar players are Billy F. Gibbons and Dusty Hill. The relatively clean-shaven drummer is … wait for it … Frank Beard …

49. “The Hudsucker Proxy” director, 1994 : COEN
I think it’s great to see two brothers working together and being so successful. Joel and Ethan Coen are two movie producers and directors who both live in New York City. The Coen brothers do love the movie-making business and they even married industry “insiders”. Ethan’s wife is film editor Tricia Cooke, and Joel is married to one of my favorite actresses, the lovely Frances McDormand.

“The Hudsucker Proxy” is a comedy film written, produced and directed by the Coen Brothers, Joel and Ethan, and released in 1994. The movie stars Tim Robbins, Jennifer Jason Leigh and Paul Newman. This one bombed at the box office.

50. Columbia and the like : IVIES
Columbia University is an Ivy League school in New York City. Columbia’s athletic teams are called the Lions, thought to be a reference to the lion on the English coat of arms. Prior to the American Revolution, Columbia was called King’s College as it was chartered by King George II in 1754.

52. French river or department : EURE
The French department of Eure is in the north of France. The most popular spot to visit in the whole department is the commune of Giverny where one can visit Claude Monet’s house and garden, the subject of so many of his paintings.

54. Images on some lab slides : AMOEBAS
An ameba (or “amoeba” as we spell it back in Ireland) is a single-celled microorganism. The name comes from the Greek “amoibe”, meaning change. The name is quite apt, as the cell changes shape readily as the ameba moves, eats and reproduces.

56. Lima-to-Bogotá dir. : NNE
Lima is the capital city of Peru. Lima was founded in 1535 by the Spanish conquistador Francisco Pizarro who named it “la Ciudad de los Reyes” (the City of Kings). Pizarro chose this name because the decision to found the city was made on January 6th, the feast of the Epiphany that commemorates the visit of the three kings to Jesus in Bethlehem.

Bogotá is the capital city of Colombia. Noted for having many libraries and universities, Bogotá is sometimes called “The Athens of South America”.

57. Frankenstein, e.g. : MONSTER
Mary Shelley’s Gothic novel has the full title of “Frankenstein; or, The Modern Prometheus”. The subtitle underscores one of the themes of the book, a warning about man’s expansion into the Industrial Revolution.

59. Its passengers were revolting : AMISTAD
La Amistad was a slave ship that operated in the 19th-century. On one voyage in 1839, La Amistad was transporting slaves abducted in West Africa from Havana, Cuba to Puerto Principe, Cuba. The newly captured slaves on board escaped and took over the ship. La Amistad was then captured by a US military vessel and the slaves taken into custody. The captives were eventually freed when their case was decided in the US Supreme Court, with John Quincy Adams pleading for the imprisoned Africans.

63. Colorful cooler : SNO-CONE
A sno-cone (also “snow cone”) is just a paper cone filled with crushed ice and topped with flavored water. Italian ice is similar, but different. Whereas the flavoring is added on top of the ice to make a sno-cone, Italian ice is made with water that is flavored before it is frozen.

Sushi is a Japanese dish that has as its primary ingredient cooked, vinegared rice. The rice is usually topped with something, most often fish, and can be served in seaweed rolls. If you want raw fish by itself, then you have to order “sashimi”.

4. Blockbuster? : TNT
TNT is an abbreviation for trinitrotoluene. Trinitrotoluene was first produced in 1863 by the German chemist Joseph Wilbrand, who developed it for use as a yellow dye. TNT is relatively difficult to detonate so it was on the market as a dye for some years before its more explosive properties were discovered.

6. Where it all comes together? : NEXUS
A nexus is a means of connection, or a center where many connections come together. “Nexus” is a Latin word meaning “that which ties or binds together”. The Latin “nexus” is the past participle of the verb “nectere” meaning “to bind”.

9. Nationals, at one time : EXPOS
The Washington Nationals baseball team started out life as the Montreal Expos in 1969. The Expos moved to Washington in 2005 becoming the Nats. There are only two Major Leagues teams that have never played in a World Series, one being the Mariners and the other the Nats.

10. Flag : TIRE
Our verb “to flag” meaning “to tire” was originally used in the sense of something flapping about lazily in the wind. From this it came to mean “to go limp, droop”, and then “to tire”.

What we call “pills” here in North America, we refer to as “tablets” on the other side of the Atlantic. A tablet is a compressed medicinal powder. Originally, a “pill” was soft mass containing medication that was rolled into a ball.

14. Duped : XEROXED
Xerox was founded in 1906 in Rochester, New York and originally made photographic paper and equipment. Real success came for the company in 1959 when it introduced the first plain-paper photocopier. Xerox named Ursula Burns as CEO in 2009, the first African American woman to head up a S&P 100 company. Burn was also the first woman to succeed another female CEO (replacing Anne Mulcahy).

24. Giant in fantasy : TOLKIEN
J. R. R. (John Ronald Reuel) Tolkien was an English author, best known by far for his fantasy novels “The Hobbit” and “The Lord of the Rings”. Although Tolkien lived in England and was a professor at Oxford, he served for many years as an external examiner at my old school, University College Dublin, in Ireland.

28. Physicist Bohr : NIELS
Niels Bohr was a Danish physicist, who won his 1922 Nobel Prize for his work on quantum mechanics and atomic structure. Later in his life he was part of the team working on the Manhattan Project, developing the first atomic bomb.

30. Display on a red carpet : GLITZ
Our word “glitz” meaning “showiness” is the Yiddish word for “glitter”.

32. Basic solution : LYE
Today when we purchase what is labelled as “lye”, it is caustic soda (sodium hydroxide).

40. Event occasioning 7-Down : DIVORCE
Our word “divorce” comes into English via French from the Latin verb “divertere” meaning “to divert, leave one’s husband”.

41. Cryotherapy choice : ICE BATH
“Cryotherapy” is the use of low temperatures as medical treatment. The term comes from the Greek “cryo” meaning “cold” and “therapy” meaning “cure”.

44. Truncated trunks? : SPEEDOS
Speedo brand swimwear was first produced in Australia in 1928, by a hosiery company that wanted to diversify. The brand name was chosen after a slogan competition among employees was won by “Speed on in your Speedos”. It was a long time ago, I guess …

Zwickau is a city in eastern Germany, located close to the Czech Republic.

51. About 7% of it is American : SAMOA
The official name for the South Pacific country formerly known as Western Samoa is the Independent State of Samoa. “Samoa” is the western part of the island group, with American Samoa lying to the southeast. The whole group of islands used to be known as Navigators Island, a name given by European explorers in recognition of the seafaring skills of the native Samoans.

55. Apple assistant : SIRI
Siri is software application that works with Apple’s iOS operating system. “Siri” is an acronym standing for Speech Interpretation and Recognition Interface. You’ve probably seen the ads on television, with folks talking to their iPhones asking for information and responding with a voice. I hear that Google is a little scared by Siri, as Siri is non-visual. There’s no need to touch a screen or a keyboard to work with Siri, no opportunity to click on one of Google’s ads!

60. Coral ___ (city near Oakland Pk., Fla.) : SPR
Coral Springs is a city in Florida that lies about 20 miles northwest of Fort Lauderdale. The city is a planned community that was developed by a division of Westinghouse called Coral Ridge Properties. Coral Springs was chartered in 1963, with the name “donated” by the development company.