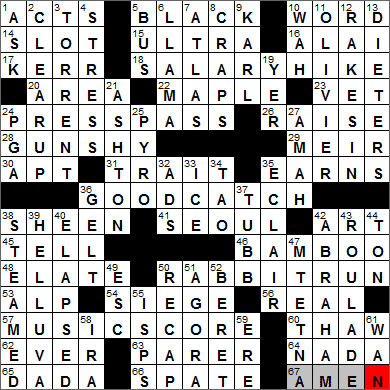 CROSSWORD SETTER: Gary Cee
THEME: Touchdown … the last word in today’s themed answers give us a progression of actions in football that lead to a touchdown:

16. Jai ___ : ALAI
Even though jai alai is often said to be the fastest sport in the world because of the speed of the ball, in fact golf balls usually get going at a greater clip.

17. Theater critic Walter : KERR
Walter Kerr was a Broadway theater critic for the “New York Herald Tribune” and the “New York Times”. Together with his wife Jean, Kerr also wrote the Tony-winning musical “Goldilocks”, which premiered in 1958.

22. ___ syrup : MAPLE
About 75% of the world’s maple syrup comes from the province of Quebec. The US’s biggest producer is the state of Vermont, which produces 5-6% of the world’s supply.

29. Golda of Israel : MEIR
Golda Meir was known as the “Iron Lady” when she was Prime Minister of Israel, long before the term came to be associated with British Prime Minister Margaret Thatcher. Golda Meir was born Golda Mabovitch in Kiev (in modern-day Ukraine), and when she was a young girl she moved with her family to the United States and settled in Milwaukee. As a teenager she relocated to Denver where she met and married Morris Meyerson, at the age of 19. She and her husband joined a kibbutz in Palestine in 1921, when she was in her twenties. Meir had been active in politics in the US, and continued her political work in Palestine. She was very influential during WWII, and played a leading role in negotiations after the war leading to the setting up of the state of Israel. By the time she was called on to lead the country, Meir had already retired, citing exhaustion and ill health. But serve she did, and led Israel during turbulent times (e.g. the massacre at the Munich Olympics, and the Yom Kippur War). She eventually resigned in 1974, saying that was what the people wanted.

41. South Korea’s capital : SEOUL
Seoul is the capital city of South Korea. The Seoul National Capital Area is home to over 25 million people and is the second largest metropolitan area in the world, second only to Tokyo, Japan.

46. Panda’s favorite plant : BAMBOO
The grass known as bamboo is one of the fastest-growing plants in the world. Sadly, there are stories of growing bamboo being used as a device of torture. Supposedly, a victim can be staked out over bamboo shoots so that the shoots grow into the human flesh. Theoretically, bamboo can grow several inches in just three days.

50. 1960 John Updike novel : RABBIT RUN
The 1960 novel by John Updike called “Rabbit Run” tells the story of Harry “Rabbit” Angstrom as he tries to escape from his constraining, middle-class life. “Rabbit Run” is the first in a series of novels from Updike that feature the “Rabbit” character, the others being:

54. Prolonged attack : SIEGE
Our word “siege” comes from a 13th century word for a “seat”. The military usage derives from the concept of a besieging force “sitting down” outside a fortress until it falls.

64. Zippo : NADA
“Nada” is the Spanish word for “nothing”. “De nada” translates literally from the Spanish as “of nothing”, and is used to mean “you’re welcome” or “don’t mention it”. The French have the same expression “de rien”, also translating to “of nothing” and used the same way.

67. “You sure got that right!” : AMEN!
The word “amen” is translated as “so be it”. “Amen” is said to be of Hebrew origin, but it is likely to be also influenced by Aramaic and Arabic.

Down
5. Vehicle that may have a farebox : BUS
We use the term “bus” for a mode of transportation, an abbreviated form of the original “omnibus”. We imported “omnibus” via French from Latin, in which language it means “for all”. The idea is that an omnibus is a “carriage for all”.

6. Long-necked animal in a petting zoo : LLAMA
Many female mammals lick off their newborn. That’s not an option for llamas as their tongues only reach out of their mouths about half an inch. Instead llama dams nuzzle their young and hum to them.

7. Book of maps : ATLAS
The famous Flemish geographer Gerardus Mercator published his first collection of maps in 1578. Mercator’s collection contained a frontispiece with an image of Atlas the Titan from Greek mythology holding up the world on his shoulders. That image gave us our term “atlas”.

8. Betting game with dice : CRAPS
If one considers earlier versions of craps, then the game has been around for a very long time and probably dates back to the Crusades. Craps may be derived from an old English game called “hazard”, also played with two dice and which was mentioned in Geoffrey Chaucer’s “Canterbury Tales” from the 1300s. The American version of the game came here courtesy of the French and first set root in New Orleans where it was given the name “crapaud”, a French word meaning “toad”.

9. Communism theorist Marx : KARL
Karl Marx was a German philosopher and revolutionary who helped develop the principles of modern communism and socialism. Marx argued that feudal society created internal strife due to class inequalities which led to its destruction and replacement by capitalism. He further argued that the inequalities created in a capitalist society create tensions that will also lead to its self-destruction. His thesis was that the inevitable replacement of capitalism was a classless (and stateless) society, which he called pure communism.

11. Best Actor for “Hamlet,” 1948 : OLIVIER
Laurence Olivier won his only Best Actor Oscar in 1948, for playing the lead in his own screen adaptation of William Shakespeare’s “Hamlet”.

Laurence Olivier has to be one of the most respected actors to come out of England in the 20th century. He had tremendous impact on stage and screen, and was never short of work on either side of the Atlantic. While working in the British film industry just before WWII, Olivier met actress Vivien Leigh. The two married actors started an affair. Olivier travelled to Hollywood as he was cast as Heathcliff in “Wuthering Heights”, his big break in Hollywood. Leigh followed him, and found herself cast as Scarlett O’Hara in “Gone with the Wind”. The couple took Hollywood by storm, and eventually unraveled their prior marriages so that they could wed, in 1940.

21. Kutcher of “Two and a Half Men” : ASHTON
Ashton Kutcher played the character Michael Kelso on Fox’s “That ‘70s Show”. Kelso was Kutcher’s breakthrough acting role. Kutcher is now appearing on the sitcom “Two and a Half Men”, having replaced the “disgraced” Charlie Sheen. In 2009, Kutcher became the first user on Twitter to get over 1 million followers. I wasn’t one of them …

“Two and a Half Men” is a TV sitcom that is remarkably successful despite being fraught with controversy. The eighth season had to be suspended when the show’s star Charlie Sheen went into drug rehab and made disparaging comments about the show’s producers. Sheen was fired, and his role was taken over by a new character played by Ashton Kutcher. In 2012, Angus T. Jones who plays young Jake urged fans not to watch the show as it was “filth”. Jones had recently converted to the Seventh-day Adventist Church, and the show’s themes clashed with the church’s standards.

24. Links org. : PGA
The Professional Golfers’ Association (PGA) was founded in 1916 and today has its headquarters (unsurprisingly) in Florida, where so many golfers live. Back in 1916, the association was based in New York City.

25. One who delights in starting fires, informally : PYRO
“Pyro-” is the combining form of the Greek word for “fire”. A pyromaniac (a “pyro”) is someone with an abnormal desire to start fires, or with a general obsession with fire.

27. Far Eastern housemaid : AMAH
“Amah” is an interesting word in that we associate it so much with Asian culture and yet it actually comes from the Portuguese “ama” meaning “nurse”. Ama was imported into English in the days of the British Raj in India when a wet-nurse became known as an amah.

34. Chinese principle : TAO
The Chinese character “tao” translates as “path”, but the concept of Tao signifies the true nature of the world.

35. Cream-filled pastry : ECLAIR
The name for the pastry known as an éclair is clearly French in origin. The French word for lightning is “éclair”, but no one seems to be too sure how it came to be used for the rather delicious bakery item.

37. Ernest of the Country Music Hall of Fame : TUBB
Ernest Tubb was a pioneering country music singer and songwriter. Tubb’s biggest hit was “Walking the Floor Over You”, which he released in 1941.

42. President Lincoln : ABRAHAM
Abraham Lincoln was born in a one-room log cabin in Hardin County, Kentucky making him the first president born in the West. His formal education was limited to a year and a half of schooling, but fortunately for us, Lincoln was an avid reader and educated himself over the years. Even though he was from a rural area, he avoided hunting and fishing because he did not like to kill animals, even for food.

43. Dish of meat wrapped around a filling : ROULADE
A roulade is made by wrapping a slice of meat around a filling prior to cooking. The name “roulade” comes from the French “rouler” meaning “to roll”.

47. Sicilian volcano : MT ETNA
Mt. Etna is the largest of three active volcanoes in Italy. Mt Etna is about 2 1/2 times the height of its equally famous sister, Mt. Vesuvius.

51. Ancient Greek marketplace : AGORA
In early Greece the “agora” was a place of assembly. Often the assemblies held there were quite formal, perhaps for the reading of a proclamation. Later in Greek history, things became less formal as the agora evolved into a market place. Our contemporary word “agoraphobia” comes from these agorae, in the sense that an agoraphobe has a fear of open spaces, a fear of “public meeting places”.

55. AOL and MSN : ISPS
An Internet Service Provider (ISP) is just what the name indicates, a company that provides its customers with access to the Internet. One way that ISPs differentiate themselves from each other is in the way in which end users are connected to the ISP’s network. So, there are cable ISPs, DSL ISPs, dial-up ISPs and satellite ISPs. I’d go with cable if I were you, if it’s available in your area …

58. One of the Gershwins : IRA
Ira Gershwin was the lyricist who worked with his brother George to create such American classics as the songs “I Got Rhythm” and “Someone to Watch Over Me”, as well as the opera “Porgy and Bess”. After George Gershwin died, Ira continued to create great music, working with the likes of Jerome Kern and Kurt Weill.