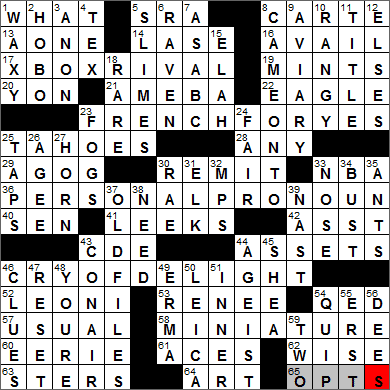 CROSSWORD SETTER: Dan Schoenholz
THEME: We Heard … each of today’s themed clues is a homonym of “we”, or the word “we” itself:

Today’s Wiki-est, Amazonian Googlies
Across
5. Mrs., in Majorca : SRA
The Island of Majorca (“Isla Mallorca” in Spanish) is Spain’s largest island, and is located in the Mediterranean Sea. The population of the island ballooned over the past few decades as Majorca became a mecca for tourists from all over Europe.

8. ___ blanche : CARTE
“Carte blanche” was imported from French in the early 1700s when it was used to mean “blank paper” (in French it means “white paper”). Later in the century the term came to mean “full discretionary power”, which is how we use the word today.

17. Wii : XBOX RIVAL
Xbox is made by Microsoft (I’m sure the kids have one around here somewhere!) and introduced in 2001. The current version, I think, is known as the Xbox 360.

The Wii is the biggest-selling game console in the world. Two distinguishing features are the impressive wireless remote control and its WiiConnect24 system which allows the console to get messages and updates wirelessly in standby mode. I have my kids unplug the darn thing when they aren’t using it, as even in standby mode it sucks up bandwidth on my wireless network here at the house.

21. One-celled organism : AMEBA
An ameba (or “amoeba” as we spell it back in Ireland) is a single-celled microorganism. The name comes from the Greek “amoibe”, meaning change. The name is quite apt, as the cell changes shape readily as the ameba moves, eats and reproduces.

22. Birdie beater : EAGLE
The use of the word “eagle” to signify a 2-under-par score on a hole in golf, simply builds on the established use of “birdie” for 1-under-par. An eagle is just a “bigger” bird, and 2-under par is “bigger” and better than 1-under.

Apparently the term “birdie” originated in 1899 at the Atlantic City Country Club in Northfield, New Jersey. A golfer hit his second shot on a par four that stopped inches from the cup after hitting a bird in flight. The golfer tapped the ball in for one-under-par, and his golfing buddies labeled the second shot a “bird”. The golfers started to call one-under-par a birdie, and the term spread through the club, and from there around the world …

25. Chevy S.U.V.’s : TAHOES
The Chevrolet Tahoe is basically the same design as the GMC Yukon, both cars being sports utility vehicles. The Tahoe is rated at 15 mpg for city driving, but there is a hybrid version which is rated at a whopping 21 mpg …

33. Org. for Wizards and Magic : NBA
The Washington Wizards are the professional basketball team based in the nation’s capital. The franchise began playing in Chicago as the Packers, in 1961. One year later, the Chicago team changed its name to the Zephyrs. After one more season, the franchise relocated and became the Baltimore Bullets. In 1973, the team moved to Landover, Maryland to became the Capital Bullets, and then took the Washington Bullets name the following season. The final name change came in 1995, as the owner was uncomfortable with the violent images conjured up by the “Bullets” name. The Wizards name was chosen after a fan contest.

43. Start of a musical scale : CDE
The C major scale starts with the pitches C, D and E.

52. Téa of “Jurassic Park III” : LEONI
Téa Leoni is an American actress. One of Leoni’s early parts was in the great film “A League of Their Own” (a minor role, Racine at first base). She also played Sam Malone’s fiancée on “Cheers” and opposite Adam Sandler in “Spanglish”. My favorite of her more prominent roles was as Jane in “Fun with Dick and Jane”.

Unlike the first two films in the series, “Jurassic Park III” was not directed by Steven Spielberg, although it was produced by Amblin Entertainment, Spielberg’s production company. “Jurassic Park III” received only a moderately favorable reception at the box office, unlike its very successful predecessors. Regardless, there is a “Jurassic Park 4” in the works that is planned for release in 2015.

53. Actress Zellweger : RENEE
Renée Zellweger’s big break came in the 1996 movie “Jerry Maguire”. A few years later she followed that up with a string of successes in “Bridget Jones Diary” (2001), “Chicago” (2002) and “Cold Mountain” (2003). My wife and I love watching her play Bridget Jones, and as someone coming from the British Isles I have to say she does a remarkable job with the accent. She worked hard to perfect that accent, and of course she had a voice coach. She also went “undercover” and worked as a temp in an office for three weeks fine-tuning her skills.

54. Abbr. after a series of equations, maybe : QED
QED is used at the end of a mathematical proof or a philosophical argument. The QED acronym stands for the Latin “quod erat demonstrandum” meaning “that which was to be demonstrated”.

61. They aren’t returned : ACES
In tennis, an ace is a serve that an opponent fails to hit.

Down
2. Rail rider : HOBO
No one seems to know for sure how the term “hobo” originated, although there are lots of colorful theories. My favorite is that “hobo” comes from the first letters in the words “ho-meward bo-und”, but it doesn’t seem very plausible. A kind blog reader tells me that according to Click and Clack from PBS’s “Car Talk” (a great source!), “hobo” comes from “hoe boy”. Hoe boys were young men with hoes looking for work after the Civil War. Hobos differed from “tramps” and “bums”, in that “bums” refused to work, “tramps” worked when they had to, while “hobos” traveled in search of work.

3. Soon, quaintly : ANON
“Anon” originally meant “at once” and evolved into today’s meaning of “soon” apparently just because the word was misused over time.

5. Attacks à la “Ghostbusters” : SLIMES
1984’s “Ghostbusters” really is a fun movie. It stars Bill Murray and Harold Ramis, and was directed by Ivan Reitman (a trio that also worked together on 1981’s “Stripes”). The first draft of the screenplay was written by another star of the movie, Dan Aykroyd. Aykroyd originally envisioned “Ghostbusters” as a vehicle for himself and John Belushi, but sadly Belushi passed away before the project could be realized.

6. Baltimore footballer : RAVEN
The Baltimore football team’s name “the Ravens” has a literary derivation. Baltimore was the home of the writer Edgar Allen Poe, and so the team took its moniker from his most famous poem, “The Raven”. The name was selected in a fan contest.

25. Military base tune : TAPS
“Taps” is played nightly by the US military, indicating “lights out”. It’s also known as “Butterfield’s Lullaby” as it is a variation of an older bugle call named the “Scott Tattoo”, arranged during the Civil War by the Union Army’s Brigadier General Daniel Butterfield. The tune is called “taps”, from the notion of drum taps, as it was originally played on a drum, and only later on a bugle.

31. Yellowstone grazer : ELK
The elk (also known as the wapiti) is the one of the largest species of deer in the world, with only the moose being bigger. Early European settlers were familiar with the smaller red deer back in their homelands, so when they saw the “huge” wapiti they assumed it was a moose, and incorrectly gave it the European name for a moose, namely “elk”. The more correct name for the beast is “wapiti”, which means “white rump” in Shawnee. It’s all very confusing …

Yellowstone National Park was the first National Park to be established in the world, when it was designated as such by President Grant in 1872. What a great tradition it started! The American National Parks truly are a treasure.

33. Red feature of Ronald McDonald : NOSE
According to “Fast Food Nation”, an exposé by investigative journalist Eric Schlosser that reveals in the inner workings of the US fast food industry, the marketing folks at McDonald’s were very successful at targeting children in campaigns. McDonald’s copied the marketing plans of Walt Disney to attract children, and as a result also their parents and grandparents. That’s how Ronald McDonald was born …

39. Thomas with a sharp pen : NAST
Thomas Nast was an American caricaturist and cartoonist. He was the creator of the Republican Party elephant, the Democratic Party’s donkey, Uncle Sam and the image of the plump and jocular Santa Claus that we use today.

43. 1997 Nicolas Cage thriller : CON AIR
“Con Air” is an entertaining action movie that was released in 1997. The film tells the story of a bunch of convicts being transported by air who escape and take control of the plane. If you take a look at the movie’s closing credits you’ll see the words “In Memory of Phil Swartz”. Swartz, a welder with the special effects team, was killed in a tragic accident when a static model of the plane used in the movie fell on him.

Nic Cage was born Nicolas Coppola. Cage is the nephew of director Francis Ford Coppola and actress Talia Shire, both of whom are his father’s siblings.

45. Former home of the Mets : SHEA
Shea Stadium in Flushing Meadows, New York was named after William A. Shea, the man credited with bringing National League baseball back to the city in the form of the New York Mets. Shea Stadium was dismantled (not imploded) in 2008-2009, and the site now provides additional parking for the new stadium nearby called Citi Field.

48. “___ the One That I Want” (song from “Grease”) : YOU’RE
“Grease” was, and still is, a very successful stage musical with a blockbuster film version released in 1978. “You’re the One That I Want” is a song that was written especially for the movie, one which made it to number one in the charts, followed soon after by the “Grease” theme song.

50. Classic German camera maker : LEICA
Leica is a German optics company, famous for production of lenses and cameras. The 1913 Leica was the first practical camera that could use 35mm film, a size chosen because it was already the standard for film used in motion pictures.