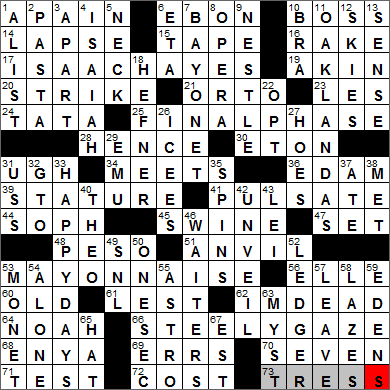 Today’s Wiki-est, Amazonian Googlies
Across
6. Poetic black : EBON
Ebony is another word for the color black (often shortened to “ebon” in poetry). Ebony is a dark black wood that is very dense, one of the few types of wood that sinks in water. Ebony has been in high demand so the species of trees yielding the wood are now considered threatened. It is in such short supply that unscrupulous vendors have been known to darken lighter woods with shoe polish to look like ebony, so be warned …

23. “___ Misérables” : LES
The 1980 musical “Les Misérables” is an adaptation of the 1862 novel of the same name by Victor Hugo. The show opened in London in 1985, and is the longest running musical in the history of London’s West End. My wife and I saw “Les Miz” in the Queen’s Theatre in London quite a few years ago, but were only able to get tickets in the very back row. The old theater’s seating is very steep, so the back row of the balcony is extremely high over the stage. One of the big events in the storyline is the building of a street barricade over which the rebels fight. At the height we were seated we could see the stagehands behind the barricade, sitting drinking Coke, even smoking cigarettes. On cue, the stagehands would get up and catch a dropped rifle, or an actor that had been shot. It was pretty comical. I didn’t really enjoy the show that much, to be honest. Some great songs, but the musical version of the storyline just didn’t seem to hang together for me.

24. “Toodles!” : TATA
An Englishman might say “tata” or “cheerio” instead of “goodbye”. Well, supposedly so!

30. Feeder school for Oxford and Cambridge : ETON
The world-famous Eton College is just a brisk walk from Windsor Castle, which itself is just outside London. Eton is noted for producing many British leaders including David Cameron who took power in the last UK general election. The list of Old Etonians also includes Princes William and Harry, the Duke of Wellington, George Orwell, and the creator of James Bond, Ian Fleming (as well as 007 himself as described in the Fleming novels).

36. Cheese in a red wheel : EDAM
Edam cheese takes its name from the Dutch town of Edam in North Holland. The cheese is famous for its coating of red paraffin wax, a layer of protection that helps Edam travel well and prevents spoiling. You might occasionally come across an Edam cheese that is coated in black wax. The black color indicates that the underlying cheese has been aged for a minimum of 17 weeks.

44. 10th grader, informally : SOPH
The term “sophomore” has been used for a student in the second year of university since the 1680’s. The original meaning of the word was “arguer”. The term has Greek roots, from two Greek words that have been artificially combined in English. The Greek “sophos” means “wise”, and “moros” means “foolish”.

48. Cancún coin : PESO
The coin called a “peso” is used in many Spanish-speaking countries around the world. The coin originated in Spain where the word “peso” means “weight”. The original peso was what we know in English as a “piece of eight”, a silver coin of a specific weight that had a nominal value of eight “reales”.

53. Condiment that can remove crayon marks : MAYONNAISE
Mayonnaise originated in the town of Mahon in Menorca, a Mediterranean island belonging to Spain. The Spanish called the sauce “salsa mahonesa” after the town, and this morphed into the French word “mayonnaise” that we use in English today.

56. Women’s magazine with a palindromic name : ELLE
“Elle” magazine was founded in 1945 in France and today has the highest circulation of any fashion magazine in the world. “Elle” is the French word for “she”.

61. “___ we forget” : LEST
“Lest we forget” is an oft-quoted phrase, one that comes from a poem by Rudyard Kipling called “Recessional”. Kipling wrote the piece on the occasion of the Diamond Jubilee of Queen Victoria in 1897 and used it to express sadness at the waning of the British Empire. The phrase “lest we forget” is used in this context, a warning that the empire will decline. Ever since WWI we’ve been using the words on memorials as a plea not forget the sacrifices made by others in the past.

68. New Age singer from Ireland : ENYA
Enya’s real name is Eithne Patricia Ní Bhraonáin, which can translate from Irish into Enya Brennan. Her Donegal family (in the northwest of Ireland) formed a band called Clannad, which included Enya. In 1980 Enya launched her very successful solo career. She sure does turn up a lot in crosswords!

70. Complement of Disney dwarfs : SEVEN
In the original Brothers Grimm fairy tale called “Snow White”, the seven dwarfs were not given any names. The names were added for the 1937 classic Disney film “Snow White and the Seven Dwarfs”. The seven dwarfs are:

Down
2. Spaghetti or ziti : PASTA
The term “spaghetti” is a plural diminutive form of the Italian word “spago”, which means “thin string, twine”.

Cylindrical pasta is known in general as “penne”, and there are many variants. For example, ziti is a particularly large and long tube with square-cut ends.

4. Old Testament prophet : ISAIAH
The Book of Isaiah is part of the Hebrew Bible and the Christian Old Testament. Isaiah is not mentioned in the Qur’an, but many Muslim scholars consider Isaiah a prophet.

5. Locale for an Adam’s apple : NECK
The voice box or larynx is where pitch and volume of sound are manipulated when we talk. The structure called the Adam’s apple that protrudes from the human neck is formed by the thyroid cartilage that surrounds the larynx. The Adam’s apple of males tends to increase in size during puberty, so the feature tended to be associated more with males in days gone by, perhaps leading to the name “Adam’s” apple.

7. Rifle attachment : BAYONET
A bayonet is a blade that is attached to the muzzle end of a rifle. It’s thought that the term derives from the French city of Bayonne in Gascony where perhaps bayonets were first made.

9. Crunch maker : NESTLE
The Nestlé Crunch candy bar was introduced way back in 1937.

10. So-called “mansiere,” essentially, in a “Seinfeld” episode : BRA
Male bras do exist, although they typically are used to “flatten” any breast tissue that has developed rather than “lift”. Some male runners opt to wear male bras in order to avoid nipple chafing.

11. Team in “Moneyball” : OAKLAND A’S
Billy Beane is the general manager of the Oakland Athletics baseball team. Michael Lewis wrote his book “Moneyball” about the way Billy Beane built his team by bringing on board players who were “undervalued”, getting the maximum benefit from his limited payroll budget. I must admit I know nothing about baseball, but I thoroughly enjoyed reading “Moneyball”, and the film adaptation with Brad Pitt playing Beane.

18. Playboy founder Hugh : HEFNER
Hugh Hefner is from Chicago. His first publishing job was in the military, where he worked as a writer for a US Army newspaper from 1944-46. He went to college after his military service and then worked as a copywriter for “Esquire” magazine. He left “Esquire” to found his own publication that he called “Playboy”, which first hit the newsstands in 1953. “Playboy” has been around ever since.

26. Alternatives to Slurpees : ICEES
Icee and Slurpee are brand names of those slushy drinks. Ugh …

29. Down Under bird : EMU
Emu eggs are very large, with a thick shell that is dark-green in color. One emu egg weighs about the same as a dozen chicken eggs.

33. The Fonz’s sitcom : HAPPY DAYS
Fonzie is a character in the sitcom “Happy Days” that was originally aired from 1974 to 1984. The Fonz was written as a secondary character, but eventually took over the show. Fonzie is of course played by Henry Winkler.

38. N.Y.C. presenter of 8-Down, with “the” : MET
The Metropolitan Opera of New York City is the largest classical music organization in the country, presenting about 220 performances each and every year. Founded in 1880, the Met is renowned for using technology to expand its audiences. Performances have been broadcast live on radio since 1931, and on television since 1977. And since 2006 you can go see a live performance from New York in high definition on the big screen, at a movie theater near you …

40. “The Cosby Show” son : THEO
Malcolm-Jamal Warner was the child actor who played Theo Huxtable on “The Cosby Show”. You can see the grown-up Warner today playing Dr. Alex Reed on the BET sitcom “Reed Between the Lines”.

43. Wreath in Waikiki : LEI
“Lei” is the Hawaiian word for “garland, wreath”, although in more general terms a “lei” is any series of objects strung together as an adornment for the body.

Waikiki is a neighborhood of Honolulu, home to the famous Waikiki Beach. The name “Waikiki” means “spouting fresh water” in Hawaiian.

53. Impressionist Claude : MONET
Claude Monet painted the harbor of Le Havre in the north of France in 1872, giving it the title “Impression, Sunrise”. The painting is not a “realistic” representation of the scene in front of him, hence the name “impression”. It was this very painting that gave rise to the name of the Impressionist movement.

55. Houston ballplayer : ASTRO
The Houston baseball team changed its name to the Astros from the Colt .45s in 1965 when they started playing in the Astrodome. The Astrodome was so called in recognition of the city’s long association with the US space program.

59. Idyllic places : EDENS
According to the Book of Genesis, Adam and Eve lived in a garden “in” Eden, with Eden being geographically located by reference to four rivers including the Tigris and the Euphrates. Some scholars hypothesize that Eden was located in Mesopotamia, which encompasses much of modern-day Iraq.

63. Classic computer game set on an island : MYST
In the days when I played the occasional video game, the best of the bunch was undoubtedly “Myst”. It is a game full of puzzles with the player wandering through a beautifully designed interactive world.

65. Sombrero, e.g. : HAT
In English we think of a sombrero as a wide-brimmed hat, but in Spanish “sombrero” is the word for any hat. “Sombrero” is derived from “sombra” meaning “shade”.