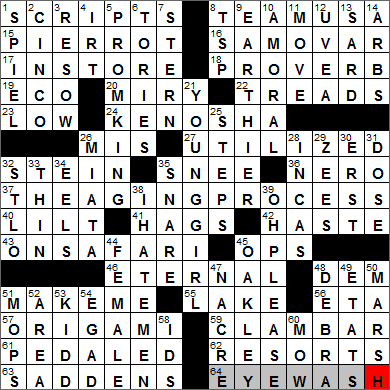 Today’s Wiki-est, Amazonian Googlies
Across
1. In-box material for some agents : SCRIPTS
Talent agents get a lot of scripts in their in-boxes, potential jobs for their clients.

15. Stock pantomime character : PIERROT
A pierrot is character appearing often in pantomimes, particularly of the French variety. A pierrot is a man dressed in white, in a loose blouse with large buttons down the center. He also wears heavy white makeup, and behaves somewhat like a buffoon.

16. Decorative server : SAMOVAR
The samovar originated in Russia, and is often a very elegant water boiler, usually for making tea. As such, there is often an attachment on top of a samovar to keep a teapot warm.

23. A cyclone is a big one : LOW
A cyclone is a weather system, something like a tropical storm. It is composed of air circulating rapidly around a low pressure center. In the northern hemisphere, cyclones circulate in a counterclockwise direction, whereas in the southern hemisphere they circulate clockwise.

24. Wisconsin port : KENOSHA
Kenosha, Wisconsin is a city on the western shore of Lake Michigan. Given its location, Kenosha has strong ties with both Milwaukee and Chicago. The name Kenosha is an anglicized form of “gnozhé”, the Native American name for an early settlement in the area that translates as “place of the pike”.

Gertrude Stein was a great American writer who spent most of her life in France. Gertrude Stein met Alice B. Toklas in Paris in 1907 and the two were life partners until Stein died in 1946. Cleverly, Stein published her own memoirs in 1933 but called the book “The Autobiography of Alice B. Toklas”. It was to become her best selling title.

35. “The Mikado” weapon : SNEE
“Snick or snee” is the name given to cut and thrust while fighting with a knife. The phrase is rooted in a pair of Dutch words and it gave its name to a “snee”, a light sword-like knife.

36. Emperor who built the Domus Aurea : NERO
Following the great fire of 64 AD in Rome, many large homes on the slopes of Palatine Hill in the center of the city were burned to the ground. The emperor Nero cleared the area completely and used the land to construct an extravagant villa called the Domus Aurea (Latin for “Golden House”).

37. Gerontologist’s study : THE AGING PROCESS
Gerontology is the study of all aspects of aging, including the biology, psychology and sociology. Geriatrics is the study of diseases encountered in older adults.

43. Watching the big game, say : ON SAFARI
“Safari” is a Swahili word, meaning “journey” or “expedition”.

46. Like Rome, it’s said : ETERNAL
The Italian capital of Rome is known as “The Eternal City”, a name given by ancient Roman poets and writers.

48. Blue, in a way: Abbr. : DEM
On political maps, red states are Republican and blue states Democrat. The designation of red and blue states is a very recent concept, only introduced in the 2000 presidential election by TV journalist, the late Tim Russert. In retrospect, the choice of colors is surprising, as in other democracies around the world red is usually used to describe left-leaning socialist parties (the reds under the bed!), and blue is used for conservative right-wing parties. In election cycles, swing/battleground states are often depicted in purple, the color formed by mixing red and blue.

56. Symbol of elasticity, in economics : ETA
Elasticity in the world of economics is a mathematical concept. An elastic variable is one that might be varied by changing something else. For example, in some markets one can lower the price of goods and thereby increase the volume of sales. Sometimes variables are inelastic. For example, sales volume might be described as inelastic if chaning the price has no effect.

Down
1. Door-to-door delivery : SPIEL
A spiel is a lengthy speech or argument designed to persuade, like a sales pitch. “Spiel” comes to us from German, either directly (“spiel” is the German for “play”) or via the Yiddish “shpil”.

4. N.Y.C. line : IRT
The Interborough Rapid Transit Company (IRT) was the original private operator of the New York Subway when it opened in 1904. The city took over ownership of the system in 1940, but the lines originally operated by the IRT are still known by the IRT moniker.

5. Alpha senior? : PROM KING
The alpha (leader) in the senior class of a high school might be crowned prom king.

6. One side in the Revolutionary War : TORIES
During the American Revolution, those advocating Independence were known as Patriots. Those who stayed loyal to Britain were called Loyalists or Tories.

12. Iris’s location : UVEA
The uvea is the middle of the three layers that make up the eyeball.

13. Orangish gem : SARD
Sard is a reddish-brown gem that is often referred to as Carnelian, although generally sard is harder and darker. Sard probably takes its name from the Persian word “sered” meaning yellowish-red.

14. Wall St. manipulators : ARBS
“Arb” is short for an arbitrageur, one who profits from the purchase of securities in one market and the subsequent sale in another, hence taking advantage of price discrepancies across markets.

21. 1968 #2 hit with the lyric “My love for you is way out of line” : YOUNG GIRL
“Young Girl” is a very catchy and dramatic song released in 1968 by Gary Puckett & the Union Gap. The song tells the story of a man who is heartbroken to discover that the love of his life is underage.

26. Mustang competitor : MIATA
I’ve always liked the looks of the Mazda Miata, probably because it reminds me so much of old British sports cars. The Miata is built in Hiroshima, Japan.

The Ford Mustang car was introduced in 1964. Back then the Mustang wasn’t a brand new design, but was based on the Ford Falcon. The Mustang was the first of the “pony cars”, American models that are compact, affordable, and sporty in image and performance.

28. Inti worshipers : INCAS
Inti was the sun god worshiped by the Incas. Images depicting Inti are featured on the national flags of several nations, including Argentina and Uruguay.

29. End of a dictionary : ZEES
The letter named “zed” has been around since about 1400, and derives from the Greek letter zeta. The spelling and pronunciation of “zee” used in America today first popped up in the 1670s.

32. Town in ’44 headlines : ST LO
Saint-Lô is a town in Normandy that was occupied by Germany in 1940. Saint-Lo stood at a strategic crossroads and so there was intense fighting there during the Normandy invasion of 1944. After a prolonged bombardment, very little of the town was left standing.

33. Gracile : THIN
Something described as “gracile” is “gracefully slender”.

38. “Kiss Me, Kate” song : I HATE MEN
“Kiss Me, Kate” is a musical written by Cole Porter first produced on Broadway in 1948. Cole Porter had a string of successes in the twenties and thirties including “Gay Divorce” and “Anything Goes”, but he found his career in decline in the forties. “Kiss Me, Kate” proved to be a dramatic come back, and was the only one of his shows that ran for more than 1,000 performances on Broadway.

45. Annie once played by Ethel Merman : OAKLEY
“Annie Get Your Gun” is an Irving Berlin musical, first performed on Broadway in 1946. The show is a fictionalized account of the life of sharpshooter Annie Oakley. It was written as a vehicle for Ethel Merman, and when she sang the hit tune “There’s No Business Like Show Business”, she apparently brought down the house.

Ethel Merman was an actress and singer, one noted for having a very powerful voice. Merman was married and divorced four times, the last time to the actor Ernest Borgnine albeit for only 32 days in 1964.

47. Iridescent material : NACRE
Nacre is another name for mother-of-pearl. Nacre is the strong iridescent material laid down by some mollusks on the inside of their shells, and it’s also what makes up pearls. The creature lays down nacre as a defensive mechanism, protecting the soft tissue of its body from the rough surface of the outer shell. Similarly, it uses nacre to encapsulate harmful debris or a parasite that penetrates the shell, and that’s how a pearl is formed.

48. Messing around on TV? : DEBRA
Debra Messing’s most famous role is Grace, in the television series “Will & Grace”.

53. Privateer who captained the Blessed William : KIDD
William Kidd was a Scottish privateer who went by the name “Captain Kidd”. Although Kidd was a privateer, someone authorized by the government to attack foreign shipping, he was eventually arrested and executed for piracy. There is common opinion held today that the charges against Kidd were actually trumped up.

54. Quaint shout : EGAD
“Egad” developed as a polite way of saying “oh God” in the late 1600s and is an expression of fear or surprise somewhat like “good grief!”