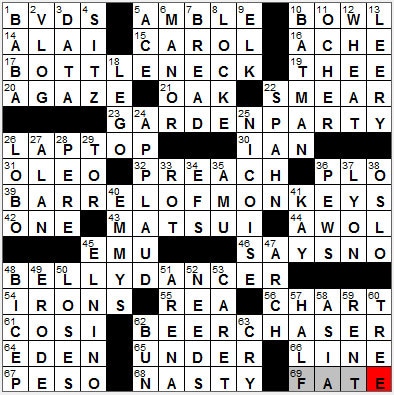 CROSSWORD SETTER: Gary Cee
THEME: BEER CHASER … all of the theme answers start with a word that can be followed by “BEER”:


Today’s Wiki-est, Amazonian Googlies
Across
1. Some undies : BVDS
The men’s underwear known as BVDs are made by the Bradley, Voorhees & Day. The company was started in 1876 to make bustles for women, and is named for its founders.

Even though jai alai is often said to be the fastest sport in the world (because of the speed of the ball), in fact golf balls usually get going at a greater clip.

15. Joyful tune : CAROL
The word “carol” came into English via the Old French word “carole”, which meant a “dance in a ring”. When “carol” made it into English, about 1300, it was used to describe a dance as well as a joyful song. Around 1500 AD carols that were sung came to be associated with Christmas.

16. Ibuprofen target : ACHE
Nuprin is one of the brand names under which the drug ibuprofen is sold. Ibuprofen is a shortened version of the drug’s name Iso-BUtyl-PROpanoic-PHENolic acid. It’s actually an anti-inflammatory, but is good for headaches too apparently.

31. Nondairy dairy aisle item : OLEO
Emperor Louis Napoleon III of France announced a competition to develop a substitute for butter, a substitute that would be more accessible to the lower classes and more practical for the armed forces. A French chemist called Hippolyte Mege-Mouries came up with something he called oleomargarine in 1869, which was eventually manufactured under the trade name “margarine”. The name “oleomargarine” also gives us our generic term “oleo”.

36. Abbas’s grp. : PLO
The Palestine Liberation Organization was founded in 1964. Its early stated goal was the liberation of Palestine, with Palestine defined as the geographic entity that existed under the terms of the British Mandate granted by the League of Nations back in 1923.

Mahmoud Abbas is very much in the news these days. He took over as Chairman of the Palestine Liberation Organization in 2004 after the death of Yasser Arafat. He is also the President of the Palestinian National Authority, equivalent to the post of “head of state”.

43. Baseball star nicknamed Godzilla : MATSUI
Hideki Matsui is a Major League Baseball player from Japan, who has played here in the US since the 2003 season. He is a power hitter and deserves his nickname “Godzilla”. He even got himself a cameo in the 2002 Japanese film “Godzilla Against Mechagodzilla”.

45. Avian source of red meat : EMU
The emu has had a tough time in Australia since man settled there. There was even an “Emu War” in Western Australia in 1932 when migrating emus competed with livestock for water and food. Soldiers were sent in and used machine guns in an unsuccessful attempt to drive off the “invading force”. The emus were clever, breaking their usual formation and adopting guerrilla tactics, operating as smaller units. After 50 days of “war”, the military withdrew. Subsequent requests for military help for the farmers were ignored. The emus had emerged victorious …

55. Stephen of “V for Vendetta” : REA
Stephen Rea is an Irish actor, whose most famous role was that of the “retired” IRA man in the brilliant 1992 film “The Crying Game”. He also starred in the chilling movie “Stuck”, a 2007 film that is based on a true story about a woman who commits a hit-and-run on a homeless man. The woman leaves the scene of the crime with the victim still “stuck” in her windshield. The woman then leaves the man to die in her garage. Chilling, eh? But as I said, a true story …

61. Mozart’s “___ Fan Tutte” : COSI
Mozart’s comic opera “Così fan tutte” is also known in English as “The School for Lovers”. A more literal translation is “Thus do all (women)”, or “Women are like that”.

64. Blissful spot : EDEN
According to the Book of Genesis, Adam and Eve lived in a garden “in” Eden, with Eden being geographically located by reference to four rivers, including the Tigris and the Euphrates. Some scholars hypothesize that Eden was located in Mesopotamia, which encompasses much of modern-day Iraq.

Down
1. Cake with a kick : BABA
Rum baba is a small yeast cake saturated in rum, and sometimes filled with whipped cream. Rum baba is derived from the recipe for the tall “babka” yeast cake which was introduced to the world by Polish diaspora. The word “baba”, and “babka”, mean “old woman” or “grandmother” in English. I guess someone must have thought that all grandmothers were saturated in rum!

2. Journal on YouTube, maybe : VLOG
A video blog is perhaps what one might expect, a blog that is essentially a series of video posts. The term “video logging” is often shortened to “vlogging”.

8. Social contract theorist John : LOCKE
John Locke was the English philosopher who postulated that the mind was a blank slate (or “tabula rasa”) and that we filled that slate with our experiences and observations.

9. Fraternal member : ELK
The Benevolent and Protective Order of Elks (BPOE) was founded in 1868, and is a social club that has about a million members today. It started out as a group of men getting together in a “club” in order to get around the legal opening hours of taverns in New York City. The club took on a new role as it started to look out for poor families of members who passed away. The club now accepts African Americans as members (since the seventies) and women (since the nineties), but atheists still aren’t welcome.

10. Penguin’s nemesis : BATMAN
Batman is unique among his superhero compatriots in that he has no special powers, just a whole load of cool gadgets.

11. Earthy tone : OCHER
Ochre is often spelled “ocher” in the US (it’s “ochre” where I come from). Ocher is a light, yellowy brown color, although variations of the pigment are possible, such as red ocher and purple ocher.

12. ___ penny (pre-1959 cent) : WHEAT
The wheat cent was a design for the penny that was issued between 1909 and 1958. The penny gets the name from two ears of durum wheat that appear as a design element on the reverse of the coin.

18. Building block brand : LEGO
Lego is manufactured by Lego Group, a privately held company headquartered in Billund, Denmark. The company was founded by a carpenter called Ole Kirk Christiansen in 1934, and the now-famous plastic interlocking blocks were introduced in 1949. They were originally sold under the name “Automatic Binding Bricks”, but I think today’s “Lego” is easier to remember! The name “Lego” comes from the Danish term “leg godt” meaning “play well”.

24. Heap kudos on : APPLAUD
Our word “kudos” is used to acclaim an exceptional achievement. “Kudos” is not a plural, despite a common misapprehension. It is a singular noun derived from the Greek “kyddos” meaning “glory, fame”.

25. Kind of salad made famous by Julia Child : NICOISE
A Niçoise salad is known as a salade Niçoise in its native France, where it was named for the city of Nice in the south of the country. The original contains no cooked vegetables, but here in North America there are almost always included some boiled potatoes.

27. ___ Freed, 1960s payola figure : ALAN
Alan Freed was an early disk-jockey, who was known by the nickname “Moondog”. Based in the US, he also recorded radio shows for broadcast in Europe. He earned quite a reputation promoting African-American rhythm and blues music, and ultimately rock and roll. However, Freed’s career came to an abrupt end when it was proven that he was at the receiving end of “payola” payments, profiting from promotion of specific records on his shows.

37. City on the Rhône : LYON
The city of Lyon in France, is also known as Lyons in English.

40. TV honors : EMMYS
The Emmy Awards are the television equivalent of the Oscars in the world of film, the Grammy Awards in music and the Tony Awards for the stage. Emmy Awards are presented throughout the year, depending on the sector of television being honored. The most famous of these ceremonies are the Primetime Emmy Awards and the Daytime Emmy Awards. The distinctive name of “Emmy” is a softened version of the word “immy”, the nickname given to the video camera tubes found in old television cameras.

41. Bandleader Kyser : KAY
Kay Kyser was popular bandleader in the thirties and forties.

45. Phenomenon named for the infant Jesus : EL NINO
When the surface temperature of the Pacific Ocean rises or falls more that half a degree centigrade, then there is said to be an El Niño episode. That small temperature change in the Pacific has been associated with climatic changes that can stretch right across the globe. El Niño is Spanish for “the boy” and is a reference to the Christ child. The phenomenon was given this Spanish name because the warming is usually noticed near South America and around Christmas-time.

47. Keystone’s place : ARCH
The keystone of an arch is the last piece put in position, the placement of which allows the arch to bear weight. The keystone sits right at the apex.

48. Muscle strengthened by curls, informally : BICEP
The biceps muscle is made up of two bundles of muscle, both of which terminate at the same point near the elbow. The heads of the bundles terminate at different points on the scapula or shoulder blade. “Biceps” is Latin for “two-headed”.

50. Shakes, so to speak : LOSES
One loses someone who is tailing, for example, one shakes a tail.

53. Insertion indicator : CARET
The character known as a caret was originally a proofreading mark, used to indicate where a punctuation mark was to be inserted. “Caret” is Latin for “it lacks”.

59. Monopoly payment : RENT
The commercial game of Monopoly is supposedly a remake of “The Landlord’s Game” created in 1903 by a Quaker woman called Lizzie Phillips who used it as a tool to explain the single tax theory of American economist Henry George. The Landlord’s Game was first produced commercially in 1924. The incredibly successful derivative game called Monopoly was introduced in 1933 by Charles Darrow, making him a very rich man when Parker Brothers bought the rights to the game just two years later in 1935.