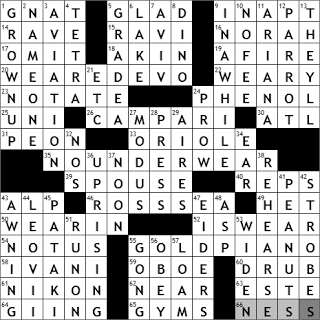 CROSSWORD SETTER: Gary Cee,
THEME: NO UNDERWEAR … there are four instances in the answer grid of the letters “NO” appearing under the letters “WEAR” (NO under-WEAR):

9. Malapropos : INAPT
Something that is malapropos is out of place, inapt. The term comes from the French “mal à propos” meaning “badly suited to the purpose”.

14. Event starting at 2 a.m., maybe : RAVE
As you might imagine, I’ve never been to a rave, and don’t have one upcoming in my diary. And if they start at 2 a.m. then I’m unlikely ever to experience one. A rave is generally an all-night party featuring loud, electronically synthesized music usually played by a DJ, as opposed to a live band.

15. Shankar who played at the Concert for Bangladesh, 1971 : RAVI
Ravi Shankar is perhaps the most famous virtuoso (to us Westerners) from the world of Indian classical music, and is noted for his sitar playing. Also, Shankar is the father of the beautiful pop singer Norah Jones.

16. Newswoman O’Donnell : NORAH
Norah O’Donnell is the chief Washington correspondent for MSNBC. Along with her husband, restaurateur Geoff Tracy, O’Donnell published what sounds like an interesting cookbook in 2010, “Baby Love: Healthy, Easy, Delicious Meals for Your Baby and Toddler

24. Embalming chemical : PHENOL
Phenol is also known as carbolic acid. Phenol can be used as an embalming fluid, although more usually bodies are embalmed using formaldehyde. Injections of phenol were used extensively by the Nazis during the WWII particularly in concentration camps, as a means of execution.

26. Italian bitters : CAMPARI
Campari is an alcoholic beverage with a distinctive red flavor and a pleasant, yet bitter taste. It is a key ingredient in one of my favorite cocktails, an Americano (one part Campari, one part sweet vermouth and a dash of club soda).

30. QE2’s domain: Abbr. : ATL
The RMS Queen Elizabeth 2 is usually known simply as the “QE2”. She was owned by Cunard and ran a transatlantic service between Southampton, England and New York, from 1969 until 2008 when she was retired. The plan was for her to be converted into a floating hotel to be located in Dubai, but now she is just sitting in a commercial port waiting on someone to rescue her.

31. Low jack? : PEON
A peon is a lowly worker with no real control over his/her working conditions. The word comes to English from Spanish where it has the same meaning.

46. Body of water named for an English explorer : ROSS SEA
The Ross Sea is a bay in the Southern Ocean of Antarctica. It was discovered by one James Ross in 1841. A more recent discovery, in the waters of the Ross Sea, was a 33 feet long giant squid, captured in 2007.

50. “The ___ o’ the Green” (old Irish ballad) : WEARIN’
“The Wearing of the Green” is an Irish ballad that dates back to the Irish Rebellion of 1798. At that time it was a gesture of rebellion against British rule to wear shamrock in one’s hat. However, wearing of revolutionary insignia was a crime, punishable by hanging.

54. God of the south wind : NOTUS
In Greek mythology Eos is the goddess of the dawn. She lived at the edge of the ocean and would wake each morning to welcome her brother, Helios, the sun. Eos is also the mother of the four winds:

55. Elvis instrument now in the Country Music Hall of Fame : GOLD PIANO
Elvis Presley owned a piano that is covered in 24 carat gold leaf. In fact, it has gold leaf on the inside surfaces as well as the outside, so it looks like the piano was actually cast out of gold.

58. Muscovite prince known as “Moneybag” : IVAN I
Ivan I was the Prince of Moscow, nicknamed “Kalita” (“Moneybag”). He used his wealth well, giving loans to neighboring principalities. These cities got into so much debt that Ivan’s successors were eventually able to annex them.

59. Instrument for Johann Jacob Bach : OBOE
Johann Jacob Bach was the older brother of Johann Sebastian Bach. He was a composer and musician in his own right, and played the oboe, flute and maybe even the violin.

60. Shellac : DRUB
A drubbing is a beating, given either literally or figuratively. The term “drub” dates back in English to the 17th century when it was imported from the Arabic word for a beating, “darb”.

61. Word on a lens cap : NIKON
Nikon was founded in 1917, a merger of three companies making various optical devices. After the merger, the company’s main output was lenses (including the first lenses for Canon cameras, before Canon made their own). During the war, Nikon sales grew rapidly as they focused on equipment for the military including periscopes and bomb sights.

66. Storied loch : NESS
The Loch Ness monster has been talked about for centuries, but modern interest started in 1933 when a spate of sightings were reported that year. They don’t seem to have stopped since, with photographs really sparking the imagination.

Down
3. F.A.A. center : AVIATION
“Aviation” is the central word in “Federal Aviation Administration”.

The Federal Aviation Administration was set up in 1958 (as the Federal Aviation Agency). The agency was set up at that time largely in response to an increasing number of midair collisions. The worst of these disasters had taken place two years earlier over the Grand Canyon, a crash between two commercial passenger airplanes resulting in 128 fatalities.

4. Vampire ___ (fanged fish) : TETRA
The Payara is also known as the “vampire fish”, as it has two long fangs that protrude upwards from the bottom jaw. Paradoxically, the main part of the Payara’s diet is the so-called man-eating piranha.

11. Afghanistan’s national airline : ARIANA
Ariana Afghan Airlines was established in 1955, with 49% of the company being owned by Pan Am, although these days the airline is 100% owned by the Afghan government. Due to perceived safety issues, the Ariana was nicknamed “Scariana” in an article in “National Geographic”.

21. Abbr. for those who didn’t make the list : ETC
Et alii is the equivalent of et cetera, with et cetera being used in place of a list of objects, and et alii used for a list of names.

27. ___ vivendi : MODUS
Modus vivendi is a Latin expression translating literally as “way of living”. Modis vivendi implies that it is possible for two parties in dispute to reach an agreement, to find “a way to live with” those differences.

29. Buenos ___ : AIRES
Buenos Aires is the capital of Argentina, located on the estuary of the Ria de la Plata. As a port city, the people of Buenos Aires are known as porteños (“people of the port”).

41. Brown strip : PEANUTS
The characters in the cartoon series “Peanuts” were largely drawn from Charles Schultz’s own life, with shy and withdrawn Charlie Brown representing Schultz himself.

42. Balls at balls? : STROBES
A strobe ball is a globe with strobe lights all around the surface. They’re commonly found in dance halls these days (apparently).

44. 10th-century pope interred at St. Peter’s Basilica : LEO VII
Leo VII was a reluctant Pope, effectively placed into the job by the monarch of Rome, Alberic II of Spoleto, so that Alberic could retain control over the papacy.

45. New York governor before Spitzer : PATAKI
The first time I ever heard of politician George Pataki, believe it or not, was when I was on vacation in Ireland. I was visiting a local historian researching my family history when the gentleman helping me told me that he was working on the family tree of a candidate running for Governor of New York, George Pataki (the Irish vote must be important in New York!). It turns out that Pataki’s grandmother was from close to where I lived in Ireland. Fame is living down the road from where a politician’s grandmother came from …

47. Ducks for cover? : EIDERS
Eiders are large seaducks. Their down feathers are used to fill pillows and quilts, giving the name to the quilt called an “eiderdown”.

48. Guido Reni painting “Cleopatra With the ___” : ASP
Guido Reni was Italian painter, from Bologna. His work “Cleopatra with the Asp” is owned by the British Royal Family.

55. Sound heard at the end of “Bohemian Rhapsody” : GONG
Queen’s “Bohemian Rhapsody” is a marvelously unique song in the pop repertoire, I think. It has a very appealing structure, with no chorus but three distinct parts and with three distinct “sounds”. The opening is truly a slow ballad, which morphs into an operatic middle section, ending with a really heavy, rock guitar conclusion. The song monopolized the number one slot in the UK charts for weeks in 1975/76, and make a comeback in 1996 when it appeared in the movie “Wayne’s World”. Great stuff …