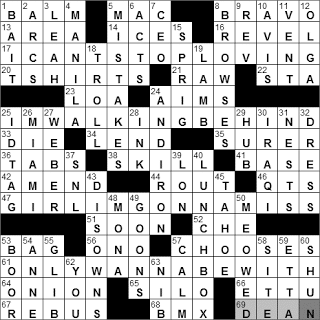 CROSSWORD SETTER: Vic Fleming & Lynn Lempel
THEME: YOU are an object of affection … all the theme answers are titles of songs that are missing the word YOU. And all those song titles are suitably affectionate messages for Valentine’s Day!

5. Big ___ (sandwich) : MAC
The iconic Big Mac sandwich was introduced nationally by McDonald’s in 1967. It was the creation of a Pittsburgh franchisee who offered it on the menu as a response to the very similar Big Boy sandwich offered by the competing restaurant chain.

23. Mauna ___ : LOA
Mauna Loa on the “big island” of Hawaii is the largest volcano on the planet (in terms of volume, not height). The name “Mauna Loa” is Hawaiian for “Long Mountain”.

25. “___ 62-Down” (1953 Eddie Fisher hit) : I’M WALKING BEHIND
“I’m Walking Behind You” was written by British bandleader Billy Reid, and published in 1953. Most famously it was recorded by Eddie Fisher that same year, a version that topped the charts on both sides of the Atlantic.

33. Six-sided game piece : DIE
As we all know, the numbers on dice are arranged so that the opposite faces add up to seven. Given this arrangement, the numbers 1, 2 and 3 all meet at a common vertex. Now, there are two ways of arranging the 1, 2 and 3 around the common vertex, a so called right-handed die (clockwise 1-2-3) or a left-handed die (counterclockwise 1-2-3). Traditionally dice used in Western cultures are right-handed, whereas Chinese dice are left-handed. Quite interesting …

36. Keep ___ on (watch) : TABS
When one “keeps tabs on” someone, one is using the word “tabs” in the sense of “tablets”, writing pads. Keeping tabs on, meaning keeping an eye on, literally implies ones is recording things about someone, in writing. The use of “tab” in this sense is also the derivation of a restaurant “tab”, a written account of the bill.

44. Drubbing : ROUT
A drubbing is a beating, given either literally or figuratively. The term “drub” dates back in English to the 17th century when it was imported from the Arabic word for a beating, “darb”.

47. “___ 62-Down” (1989 Milli Vanilli hit) : GIRL I’M GONNA MISS
“Girl I’m Gonna Miss You” was a 1989 hit by Milli Vanilli that hit the number one spot around the world. Milli Vanilli famously won a Grammy and had it revoked when it was discovered that they didn’t even provide the lead vocals for the award-winning recording, and just lip-synced when performing on stage.

52. ___ Guevara : CHE
Ernesto “Che” Guevara was born in Argentina, and in 1948 started to study medicine at the University of Buenos Aries. While at school he satisfied his need to “see the world” by taking two long journeys around South America, the story of which are told in Guevara’s memoir later published as “The Motorcycle Diaries”. While travelling, Guevara was moved by the plight of the people he saw and their working conditions and what he viewed as capitalistic exploitation. He dropped out of medical school and became involved in social reform in Guatemala. In Mexico City he met brothers Raul and Fidel Castro and was persuaded to join their cause, the overthrow of the US-backed government in Cuba. He rose to second-in-command among the Cuban insurgents, and when Castro came to power Guevara was influential in repelling the Bay of Pigs Invasion and bringing Soviet nuclear missiles to the island. Guevara left Cuba in 1965 to continue his work as a revolutionary. He was captured by Bolivian forces in 1967, and was executed. Fidel Castro led the public mourning of Guevara’s death, and soon the revolutionary was an icon for many left-wing movements around the world.

56. Lennon’s second mate : ONO
John Lennon and Yoko Ono had a very public honeymoon in a hotels in Amsterdam and then Montreal, when they staged their famous “bed-in” for peace. In answering questions from reporters Lennon found himself often repeating the words “give peace a chance”. While still in bed, he composed his famous song “Give Peace a Chance” and even made the original recording of the song in the Montreal hotel room, with reporters present, and with a whole bunch of friends. The song was released later in 1969 and became a smash hit.

66. “___, Brute?” : ET TU
Shakespeare uses the words “Et tu, Brute?” (And you, Brutus?) in his play “Julius Caesar”, but the phrase was around long before he assigned them to his Caesar. It’s not known what Julius Caesar’s actual last words were.

67. Word puzzle with pictures : REBUS
You’ll see rebus crosswords in the New York Times quite often. A rebus puzzle is one in which some squares are replaced with a symbol or picture (although we often use multiple letters when solving).

68. Big name in stunt bikes : BMX
The implication in the clue seems to be that BMX is a brand name, which it isn’t. But maybe I’m wrong …

BMX stands for Bicycle Motocross. It’s the sport where folks on bicycles race around what is in effect a regular motocross track. Medals were awarded for BMX for the first time at the Beijing Olympics, with a Latvian winning for the men, and a Française winning for the women.

4. Philippine capital : MANILA
Many moons ago I spent a couple of very happy years living in Manila in the Philippines. I had an apartment there, and residing in the apartment building next door was Imelda Marcos, along with all of her shoes I assume …

6. Every play of Shakespeare has five of them : ACTS
Shakespeare adopted the five-act structure for all of his plays, using the same format that was used by Seneca for his Roman tragedies. Given five acts, the plays tend to unfold as follows:

7. Corp. honcho : CEO
A honcho is a slang term for a leader or manager. It comes to us from Japanese, where a “hancho” is a squad (han) leader (cho).

12. ___ Korbut, 1972 Olympic gymnastic sensation : OLGA
Olga Korbut is from modern-day Belarus, but was born during the days of the Soviet Union. She competed for the USSR team in the 1972 and 1976 Olympic Games. Korbut was 17 when she appeared in the 1972 Munich Games, and had been training in a sports school since she was 8-years-old. The world fell in love with her as she was a very emotional young lady, readily expressing joy and disappointment, something that we weren’t used to seeing in athletes from behind the Iron Curtain. Korbut immigrated to the US in 1991, and now lives in Scottsdale, Arizona.

24. Fireplace log holder : ANDIRON
Andirons are those horizontal bars on which you rest logs to burn in an open fireplace. They usually come in pairs, and can be quite decorative, often made out of wrought iron.

26. City known for its Heat : MIAMI
When Miami was given permission to form a team for the NBA, two names were tossed out for consideration. A survey was taken in the area and the Miami Heat name was favored over the Miami Vice …

27. Big name in outdoor grills : WEBER
In 1952 George Stephen was working for the Weber Brothers Metal works in Chicago. One of the company’s products was a line of half-spheres that were welded together to make buoys used in Lake Michigan. Stephens took two of these metal hemispheres and converted them into the original kettle grill. Weber set up a barbecue division that Stephens ran, and Stephen became so successful that he bought out the Weber Brothers factory, and converted all production to the manufacture of grills.

30. Baghdad native : IRAQI
It seems to be widely accepted that the name “Baghdad” is derived from the Persian words “bag” (God) and “dad” (given).

37. NBC weekend skit show, for short : SNL
NBC first aired a form of “Saturday Night Live” in 1975, under the title “NBC’s Saturday Night”. The show was actually created to give Johnny Carson some time off from “The Tonight Show”. Back then “The Tonight Show” had a weekend episode, and Carson convinced NBC to pull the Saturday or Sunday recordings off the air and hold them for subsequent weeknights in which Carson needed a break. NBC turned to Lorne Michaels and asked him to pull together a variety show to fill the vacant slot, and he come up with what we now call “Saturday Night Live”.

39. Chaney of old films : LON
Lon Chaney, Sr. played a lot of crazed-looking characters in the days of silent movies. He did much of his own make-up work, developing the grotesque appearances that became his trademark, and earning himself the nickname of “the man of a thousand faces”. Most famous of all was his portrayal of “The Phantom of the Opera” in 1925.

Lon Chaney, Jr. followed in his father’s footsteps, and most famously played the werewolf in the “The Wolf Man” series of films starting in 1941. He started his acting career using his real name, Creighton Chaney, but later adopted the name “Lon Chaney, Jr.” getting a boost from his father’s reputation, I’d guess.

45. California/Nevada resort lake : TAHOE
Lake Tahoe is up in the Sierra Nevada mountains, and sits right on the border between California and Nevada. Given its location, there are tall casinos that sit right on the shore on the Nevada side of the state line where gambling is legal. Lake Tahoe is the largest alpine lake in the country. It’s also the second deepest lake, with only the beautiful Crater Lake in Oregon being deeper.

48. “___ Lisa” : MONA
Leonardo da Vinci’s masterpiece that we know in English as the “Mona Lisa” is called “La Gioconda” in Italian, the language of the artist. It’s also known as “La Joconde” by the Government of France which owns the painting and displays it in the Louvre Museum in Paris. The title comes from the name of the subject, almost certainly Lisa Gherardini, wife of Francesco del Giocondo. Giocondo was a wealthy silk merchant in Florence who commissioned the painting for the couple’s new home to celebrate the birth of their second son.

54. Meara of comedy : ANNE
Anne Meara has been married to fellow comedic actor Ben Stiller since 1954. Anne and Ben are the parents of actors Ben and Amy Stiller.

59. Jazzy singer ___ James : ETTA
Etta James is best known for her beautiful rendition of the song “At Last”. Sadly, as she discloses in her autobiography, James has lived a life that has been ravaged by drug addiction, leading to numerous legal and health problems.