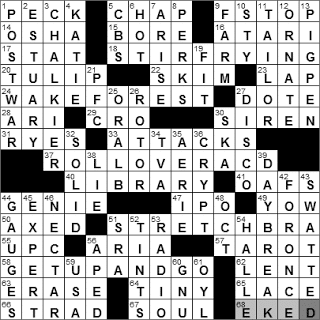 9. Camera lens setting : F-STOP
Varying the f-stop in a lens varies how big the lens opening is (the aperture) when the photograph is taken. Smaller apertures (higher f-stop values) let in less light, but result in sharper photographs.

14. Worker protection agcy. : OSHA
The Occupational Safety and Health Administration was created in 1970 during the Nixon administration. OSHA regulates workplaces in the private sector. The sole government agency that is regulated by OSHA is the US Postal Service.

16. Pioneering video game company : ATARI
The kids today probably don’t realize that we had a video game console back in the seventies, and it wasn’t a Nintendo nor was it a PlayStation. The Atari 2600 game system introduced the idea of separating out computing hardware (the console) from the game code (a cartridge). The same concept persists to this day, although cartridges have been displaced by discs and downloads.

18. Cooking in a wok, e.g. : STIR-FRYING
Wok is a Cantonese word, the name of the frying pan now used in many Asian cuisines.

20. Dutch bloom : TULIP
The world’s first ever speculative “bubble” took place in 1637, when the price of tulip bulbs sky-rocketed out of control. The tulip had been introduced into Europe a few years earlier, and demand for tulips was so high that single bulbs were selling for ten times the annual income of a skilled craftsman. The climb in prices was followed quickly by a collapse in the market that was so striking that the forces at play were given the term “tulip mania”. To this day, any large economic bubble may be referred to as “tulip mania”.

24. University in Winston-Salem, N.C. : WAKE FOREST
Wake Forest University is a private school located north of downtown Winston-Salem, North Carolina. The school opened in 1834 and was built on an old plantation called the “Forest of Wake”, that was north of the city of Raleigh. In the forties and fifties the whole school relocated to Winston-Salem.

28. “Exodus” hero : ARI
“Exodus” is a wonderful novel written by American writer Leon Uris, first published in 1947. The book was incredibly well received by the public, and is the second biggest best seller in the US, after “Gone with the Wind”. The hero of the piece is Ari Ben Canaan, played by Paul Newman in the 1960 film adaptation directed by Otto Preminger.

29. ___-Magnon man : CRO
Remains of early man, dating back to 35,000 years ago, were found in Abri de Cro-Magnon in southwest France, giving the name to these early humans. Cro-Magnon remains are the oldest that have been discovered in Europe.

33. Blitzkriegs : ATTACKS
“Blitz”, as it is used in English means a fast-moving and overwhelming attack It is a shortened version of the German word “blitzkrieg”. The blitzkrieg was a tactic used by the Germans running up to and during WWII. In the original German blitzkrieg, the army and air-force threw everything into a rapid penetration of enemy lines without stopping to reinforce its flanks. The word “blitz” means “lightning” (and “krieg” means “war”).

37. Reinvest some funds : ROLL OVER A CD
A certificate of deposit is sort of like a less flexible and higher paying savings account. Instead of depositing into a savings account, and earning interest periodically one can open a CD. With a CD one deposits a minimum amount of money, and must leave it there for a specified length of time. In return one is given a higher interest rate than a savings account, and can redeem that interest and the initial deposit when the term has expired. CDs are relatively low risk investments as they are FDIC insured, just like savings accounts.

44. “Three wishes” granter : GENIE
The “genie” in the bottle takes his name from “djinn”. “Djinns” were various spirits considered lesser than angels, people who exhibit unsavory characteristics could be said to be possessed by djinn. When the book “The Thousand and One Nights” was translated into French, the word “djinn” was transformed into “génie”, because of the similarity in sound and the related spiritual meaning. This “génie” from the Arabian tale became confused with the Latin-derived “genie”. The Latin “genius” was a guardian spirit thought to be assigned to each person at birth. Purely as a result of that translation the word genie has come to mean the “djinn” that pops out of the bottle. Quite interesting …

47. N.Y.S.E. debut : IPO
An Initial Public Offering is the offer of stock for sale by a company for the very first time. In other words, it marks the first time that a company is traded on a public exchange. Companies do this to raise capital to expand (usually). Anyone owning stock in the company prior to the IPO, can find that after the IPO that stock is now worth something on the market (as opposed to just on paper), and can become quite wealthy overnight.

50. Pink-slipped : AXED
The term “pink slip” can be used as a verb meaning “to terminate an employee”. No one really seems to know for sure where the term originated, but there are lots of stories.

55. Lines scanned by a supermarket scanner, in brief : UPC
The person behind the counter at the store might scan the Universal Price Code. The first UPC-marked item to get scanned at the front of store was on June 26, 1974, at 08:01 a.m. at Marsh’s supermarket in Troy, Ohio. It was a 10-pack of Wrigley’s Juicy Fruit chewing gum …

56. Met melody : ARIA
The Metropolitan Opera of New York City is the largest classical music organization in the country, presenting about 220 performances each and every year. Founded in 1880, the Met is renowned for using technology to expand its audiences. Performances have been broadcast live on radio since 1931, and on television since 1977. And since 2006 you can go see a live performance from New York in high definition on the big screen, at a movie theater near you.

57. Set of fortunetelling cards : TAROT
Tarot cards have been around since the mid-1400s, and for centuries were simply used for entertainment in games. It has only been since the late 1800s that the cards have been used by fortune tellers to predict the future.

62. Period after Mardi Gras : LENT
In Latin, the Christian season we now call Lent was termed “quadragesima”, a reference to the forty days that Jesus spent in the desert before beginning his public ministry. When the church began its move in the Middle Ages towards using the vernacular, the term “Lent” was introduced. “Lent” comes from “lenz”, the German word for “spring”.

65. Doily material : LACE
There was a draper in London in the seventeenth century called Doiley, and he gave his name to the lace fabric that he sold, which in turn gave its name to the ornamental mats we call doilies. I can’t stand them!

66. Treasured violin, for short : STRAD
Generations of the Stradivari family produced violins, the most famous of which were constructed by Antonio Stradivari.

13. Perpetually dirty kid in “Peanuts” : PIG-PEN
“Pig-Pen” is the kid in the “Peanuts” cartoon strip that is always dirty. Charles Schulz, the strip’s author, said that “Pig-Pen” was one of his least favorite characters, and he almost disappeared from the later years of “Peanuts” comic strips.

25. Toothbrush brand : ORAL-B
The Oral-B toothbrush was introduced to the world in 1950, designed by a California periodontist. The first “model” was the Oral-B 60, a name given to reflect the 60 tufts in the brush. And in 1969, the Oral-B was the first toothbrush to get to the moon, traveling on the Apollo 11 spacecraft.

27. Dance to Donna Summer’s “Last Dance,” e.g. : DISCO
Donna Summer is known as “The Queen of Disco”, with great hits like “Love to Love You, Baby”, “I Feel Love” and “Hot Stuff”. In the late sixties and early seventies, LaDonna Gaines (her real name) lived and worked in Germany. There she met and married an Austrian actor called Helmuth Sommer. They divorced not long after the marriage, but Donna kept his family name, just changing the “o” to “u” to give her the stage name of “Donna Summer”.

30. Jamaican music : SKA
Ska originated in Jamaica in the late fifties, and was the precursor to reggae music. No one has a really definitive etymology of the term “ska”, but it is likely to be imitative of some sound.

34. Fed. electricity provider since 1933 : TVA
The Tennessee Valley Authority has to be one of America’s great success stories when it comes to economic development. Created in 1933, the TVA spearheaded economic development in the Tennessee Valley at the height of the Great Depression. Central to the success was the federally-funded construction of flood-control and electricity-generation facilities.

48. Columbus Day mo. : OCT
The discovery of the New World by Christopher Columbus is celebrated with a national holiday in many countries. Here in the US we have Columbus Day, and in the Bahamas there is Discovery Day,  and the Day of the Americas in Uruguay.

53. Transistor, e.g. : RADIO
I remember my Dad buying our first transistor radio in the sixties, and what an amazing device it was. It could operate on batteries and didn’t need to be plugged into the wall! Having said that, I do wish I still had that old Telefunken radio set with the valves and tubes that used to glow and take so long to warm up. In Ireland we still call a portable radio simply a “transistor”.

54. Actress Berry : HALLE
The beautiful and talented actress Halle Berry is the only African American woman to win a best Actress Oscar, which she received for her performance in the 2001 movie “Monster’s Ball”. She also won a Golden Raspberry Award for Worst Actress in 2005 for playing the title role in “Catwoman”, and she very graciously accepted the award in person.

61. Olive ___ (Popeye’s sweetie) : OYL
“Thimble Theater” was the precursor comic strip to the famous “Popeye” drawn by E. C. Seger. Before Popeye came into the story, the characters Castor Oyl and Olive Oyl, brother and sister, were the main protagonists. And then, along comes a sailor …