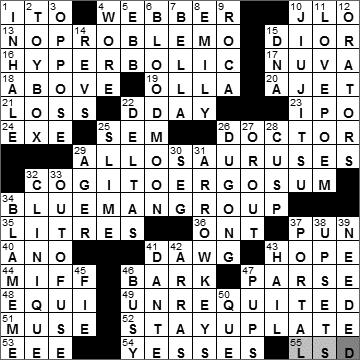 1. Japan’s Prince Hirobumi ___ : ITO
In the 1880s, Japanese leaders were concerned that their system of government was not defined well enough, leading to ambiguity about areas of responsibility and authority. One of the leaders at the time was Ito Hirobumi, and he took himself and his staff over to Europe to examine the systems of government across that continent, especially those of the British and German Empires. On returning to Japan he lobbied for and was successful in the adoption of a constitution for Japan and a modern system of government. Ito became the country’s first Prime Minister in 1885.

4. Five-time N.B.A. All-Star Chris : WEBBER
Chris Webber is a retired professional basketball player, nicknamed “C-Webb”. At college level Webber played for the University of Michigan, earning many awards and honors including selection as an All-American. Years later, Webber’s honors were stripped from him when it was revealed that he had accepted $200,000 from a local bookmaker to entice him to play for Michigan.

” : J.LO
J.Lo is the nickname of singer and actress Jennifer Lopez. J.Lo is also the title of her second studio album, released in 2001.

15. Christian with many robes? : DIOR
Christian Dior was a French fashion designer. As WWII approached, Dior was called up by the French military, drawing a temporary halt to his career in fashion. He left the army in 1942, and for the duration of the war designed clothes for the wives of Nazi officers and French collaborators. After the war his designs became so popular that he helped reestablish Paris as the fashion center of the world.

17. ___Ring (birth control brand) : NUVA
NuvaRing is a contraceptive vaginal ring that releases a low dose of progestin and estrogen over a 3 week period. As with all combined hormonal contraceptives, the NuvaRing works by preventing ovulation.

19. Vessel over heat : OLLA
An olla is a traditional clay pot used for the making of stews.

” was written by John Denver in 1966, but the most famous recording of the song was by Peter, Paul and Mary in 1969. The lyrics of the song are meant to portray a travelling musician saying goodbye to his beloved as he heads off on the road yet again. Because the song was released at the height of the Vietnam War, it was widely assumed that the words actually referred to a soldier heading off on a plane to fight overseas.

22. When all one’s planning is put to the test : D-DAY
The most famous D-Day in history June 6, 1944, the date of the Normandy landings in WWII. The term “D-Day” is used in the military to designate the day in which a combat operation is to be launched, especially when the actual date has yet to be determined. What D stands for seems to have been lost in the mists of time, although the tradition is that it just stands for “Day”. In fact, the French have a similar term “Jour J” (Day J), with a similar meaning. We also use H-Hour to denote the hour the attack is to commence.

23. Company outing, for short? : IPO
An Initial Public Offering is the offer of stock for sale by a company for the very first time. In other words, it marks the first time that a company is traded on a public exchange. Companies do this to raise capital to expand (usually). Anyone owning stock in the company prior to the IPO, find that after the IPO their stock is now worth something on the market (as opposed to just on paper), and often becomes quite wealthy overnight.

24. River of Devon : EXE
The River Exe in the south of England lies mainly in the county of Deven. It rises on Exmoor in Somerset, and passes through the city of Exeter, along the way giving its name both to the moor and the Devon city.

25. Sch. for the preordained? : SEM
Those planning on entering the clergy may be educated in a seminary.

is a wonderful piece of software used for editing graphics. When I first bought it, it was really expensive (about $300 ten years ago, I think), but now there are cost-effective, stripped down versions

29. Literally, “different lizards” : ALLOSAURUSES
The most popular dinosaurs depicted in the movies, especially the older ones, are the Tyrannosaurs and the Allosauruses. They look very similar, with the former being the really big guy.

32. Descartes found this truth to be self-evident : COGITO ERGO SUM
The great French philosopher Rene Descartes made the famous statement, in Latin, “Cogito ergo sum” … “I think, therefore I am”. Anything pertaining to Descartes can be described with the adjective “Cartesian”.

34. Colorful stage performers since 1987 : BLUE MAN GROUP
I had the pleasure of seeing the Blue Man Group perform live in Las Vegas a few years ago, and I thoroughly recommend the show. The group was formed by three men in 1987 in New York City, focusing on playing PVC instruments while wearing fabulous blue makeup. The show is much more elaborate these days, but the PVC percussion instruments still feature prominently.

35. There are 50 in a keg of Newcastle : LITRES
In the US a “full keg” is called a half-barrel and holds 15 1/2 US gallons. As with most things metric, the European keg is more straightforward, and is sized to hold 50 liters (spelled “litres” in Europe).

37. One of about 3,000 in Shakespeare’s plays : PUN
One of Shakespeare’s most famous puns is from “Richard III”. The line reads “Now is the winter of our discontent made glorious summer by this son (punning “sun”) of York”.

40. It starts with el primero de enero : ANO
In Spanish, the year (ano) starts with the first of January (el primo de enero).

47. Break down, in a way : PARSE
The verb “to parse” means “to state the parts of speech in a sentence”. “Parse” comes from the Latin word “pars” meaning “part”.

” is a novel by Tom Wolfe, first published in 1968. It tells the story of a group of guys driving across the country in a brightly painted school bus, gaining all kinds of insights with the “benefit” of LSD and other psychedelic drugs. Apparently there is a movie adaptation of the novel in the works. Trippy, man …

2. Home for Barbie and Ken

6. Autumnal event so called because it helps hunters kill their prey : BLOOD MOON
Blood Moon is also known as the hunter’s moon or sanguine moon. It is the first full moon after the harvest moon (the full moon nearest the autumnal equinox). The name comes from the tradition of hunting for food in the fall to stockpile food for the winter.

7. “Twilight” protagonist : BELLA
I don’t do vampires. The reference, is to a character (Bella Swan) in “The Twilight” series of books by Stephanie Meyer. “The Twilight Saga” is a series of films based on the books.

8. “Bones” actress Deschanel : EMILY
Emily Deschanel plays the title role (Dr. Temperance “Bones” Brennan) on the TV show “Bones”. I haven’t actually seen the show, but I saw her co-star Seeley Booth interviewed this evening, and he shared that relationship between the two lead characters on “Bones” is modeled on characters in Spencer Tracy/Katherine Hepburn movies. Might be worth a look then …

Jay-Z, as well as being a successful, and very rich, rap artist, is married to singer Beyonce.

10. Practice with locks and pins? : JIUJITSU
“Jiujitsu” is an alternate spelling for “jujitsu”, a group of martial arts associated with Japan. The name “jujitsu” comes from “ju” meaning “gentle” and “jitsu” meaning “technique”. The name was chosen to represent the principle of using the opponent’s force against himself, rather then relying on one’s own strength.

11. Troubadour’s creation : LOVE POEM
A troubadour was a composer and musician of the Middle Ages, whose works dealt mainly with chivalry and courtly love. Troubadours were usually men, but a female troubadour would have been called a trobairitz.

15. Kind of profiling : DNA
Forensic scientists use DNA, usually taken from blood, semen, skin, saliva or hair follicles. Often DNA left at a crime scene can be used to identify the perpetrator of a crime, using a process called genetic fingerprinting.

22. Some sorority women : DELTA
Delta is the fourth letter in the Greek aphabet, and is equivalent to our Roman letter “D”. The upper case letter delta is a triangle, leading to the use of the word delta to describe things that are triangular in shape, such as a delta wing on an aircraft, and a river delta at the mouth of say the Nile.

26. Sea grass grazer : DUGONG
The dugong is an ugly-looking brute, a large marine mammal related to the manatee. I does indeed eat sea grass, and is the only marine mammal that is a strict herbivore.

28. Where two branches of a curve meet, in math : CUSP
The word “cusp” comes from the Latin “cuspis” meaning “spear, point”. The term was first used in English in astrology, but then migrated into the field of mathematics to describe the point where two curves meet.

31. Certain navigational aids : ARROW KEYS
Arrow keys on a keyboard help you to navigate around a spreadsheet, for example, or a crossword puzzle online!

32. Company that gets a lot of its money from foundations? : CLINIQUE
Clinique

is a line of makeup owned by Estee Lauder. It was set up in 1967 with the intent of creating only products that were allergy tested. The quality standard used for the line is zero-allergic reactions from twelve separate applications to the skin of 600 people.

was originally marketed as a remedy for infant diarrhea, and sold under the name Bismosal: Mixture Cholera Infantum.

42. Decoration for Gertrude’s room in “Hamlet” : ARRAS
A famous arras is seen in Shakespeare’s “Hamlet”. In one pivotal scene, Polonius is hiding behind a tapestry listening to an argument between Hamlet and Gertrude. Hamlet hears Polonius, mistakes his identity, and stabs wildly through the cloth, killing Polonius. The name “arras”, used for such a tapestry, comes from the French town of Arras which was famous for the production of fine wall hangings.

47. Litter, maybe : PUPS
The word “litter” has existed in English since the 1300s, originally meaning a “bed” (the modern French word for bed is related .. “lit”). In the late 1500s litter also came to mean “offspring of a single birth” i.e. born in the one bed at the same time.

50. 36-Across neighbor : QUE
Quebec is a neighbor of Ontario. The name “Quebec” comes from an Algonguin word “kebec” meaning “where the river narrows”. This referred to the area around Quebec City where the St. Lawrence River narrows as it flows through a gap lined by steep cliffs.