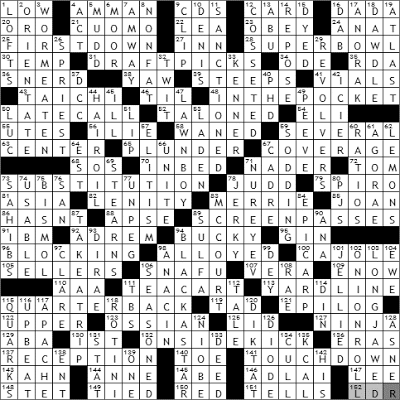 TODAY’S GOOGLIES …
Across
4 AMMAN: Centuries ago, the city of Amman, Jordan

was ruled by the Greeks. Ptolomey II Phildelphus, who ruled what was then Egypt, named the city Philadelphia.
16 DADA: Dadaism

thrived during and just after WWI, and was an anti-war, anti-bourgeois and anti-art culture.
20 ORO: Francisco Goya

was a Spanish painter, often called the last of the Old Masters, and the first of the moderns. Two of his most famous works are “The Nude Maja

” and “The Clothed Maja

keynote address to the Democratic National Convention soon after I moved to America. For a new immigrant it was an interesting glimpse into American politics.
22 LEA: Lea Thompson

is well known as the star of “Caroline in the City

“, the TV show from the nineties, but I best remember as Marty McFly’s mother in the “Back to the Future

most famous character was Charlie McCarthy

, but he also worked with Mortimer Snerd

is a martial art mostly practiced for improving overall health and increasing longevity.
55 UTES: The athletic teams of the University of Utah.
56 ILIE: I thought that Ilie Nastase

was the most entertaining tennis player of the 70s, the days of Jimmy Connors

first introduced by the German government as a standard distress signal in 1905. The sequence is remembered as the letters SOS, although there is no pause between the letters, so this is in effect only a mnemonic. Similarly, the phrases “Save Our Souls” and “Save Our Ship” are also only mnemonics, introduced after the Morse signal was adopted.
71 NADER: Ralph Nader

for the 1996 Presidential campaign. More recently he ran as an independent, with political positions that were largely consistent with the Greens.
78 JUDD: Judd Apatow

is best known for producing the TV series “Freaks and Geeks

served as Vice-President under Richard Nixon, before becoming the only VP in history to have to resign because of criminal charges (a bribery scandal).
81 ASIA: What we now know as the (great) game of Risk

, was created by a French film director in 1957, originally called “The Conquest of the World”, and first released in France.
82 LENITY: The quality of being lenient …
83 MERRIE: Merrie Melodies

was a series of cartoons distributed by Warner Brothers, first introduced in 1931, and last produced in 1969.
85 JOAN: Joan Didion

is an American writer, whose work expresses somewhat pessimistic views about contemporary society. She writes about social fragmentation, and believes that the media dictates how we live.
91 IBM: The IBM IntelliStation was a personal computer sold into the workstation niche. It was introduced in 1997, and discontinued last year (2009).
92 AD REM: Literally “to the matter”, ad rem.
94 BUCKY: Bucky Dent

won two World Series rings with the New York Yankees, in 1977 and 1978, and is most famous for hitting a home run in the 1978 playoff tie-breaker against the Boston Red Sox.
95 GIN: A Bronx Cocktail: 6 parts gin, 3 parts Sweet Vermouth, 2 parts Dry Vermouth and 3 parts orange juice.
105 SELLERS: “A Shot in the Dark

” is the second in the “Pink Panther

s first choice for a career was figure skating, but she failed to make the 1968 US Olympics team. She switched to the world of fashion, and is famous for her designs of wedding dresses … but also costumes for figure skaters.
123 OSSIAN: Scottish poet James Macpherson

produced a series of poems that he claimed were translations of ancient poems, apparently related by Ossian, a hero of Irish and Scottish folklore.
143 KAHN: “It Had to Be You

” was published in 1924,  with lyrics written by Gus Kahn

is the younger sister of Prince Charles

, and tenth in line to the throne of the United Kingdom.
145 ABE: Abe Vigoda

“, and even got his own spin-off show called “Fish”.
146 ADLAI: Adlai Stevenson

. Ted Kennedy’s lackluster responses to some of Mudd’s questions were cited as the reason support plummeted for his 1980 Presidential nomination.
7 AMWAY: Amway

is still going strong. It is one of the largest privately held companies in the United States, with sales of around $8 billion and about 13,000 employees.
10 DENIS: Denis Leary

is currently starring the TV show “Rescue Me

“, but my favorite performance of his was in “The Thomas Crown Affair

“.
13 ABU: Abu is a monkey in the Disney production of “Aladdin

‘s aren’t very popular over here in America. Everyone has one in Ireland!
32 TWIT: Again, a word not used very often here in America, but slang that used to be quite common in England.
33 KENNER: Kenner Products of Cincinnati, Ohio introduced the Easy-Bake Oven

in 1963, and they are still produced today, but now by Hasbro.
44 HAIR OIL: A pomade is perfumed ointment, mainly used for grooming the hair.
47 LAWN-BOY: The first Lawn-Boy

mower was introduced in 1934 by the Evinrude Company, and has been produced by the Toro Company since 1989.
50 LUC: Luc Besson wrote the storyline for “The Fifth Element

” when he was still in his teens, and ended up directing Bruce Willis

was one of the institutions that collapsed in the financial meltdown of 2008, and was sold off to JPMorgan Chase.
71 NUREYEV: Ballet dancer Rudolf Nureyev’s

was with Margot Fonteyn

. They had their last performance together when Nureyev was 50-years-old, and Fonteyn an impressive 69.
75 BISMOL: Pepto-Bismol

was originally marketed as a remedy for infant diarrhea, and sold under the name Bismosal: Mixture Cholera Infantum.
83 MCCOURT: “‘Tis

“, the story of his life growing up in Ireland. Frank McCourt passed away last year (2009).
84 EPICARP: The epicarp is also known as the “exocarp”, and is the tough, outer skin of fruit.
89 SULFA: Sulfa drugs is a common name for sulfonamides. They are used as anti-microbials.
90 ANA: Ana Ivanovic

is a Serbian tennis player, and former world number one. As well as playing tennis, she also studies finance at university in her native Belgrade.
93 DIRAE: The Furies in Roman mythology

were the female personification of vengeance. They were also known as the Dirae, “the terrible”.
97 CLARE: Clare Quilty is a character in the novel

“, a rival to the hero for the affections of Lolita. In the 1962 film he was played by Peter Sellers.
99 DEY: Dey was a title used in North Africa, for rulers in Algiers, Tunis and Tripoli.
102 ONION ROLL: Bialy is a Yiddish word for a small onion roll, that takes its name from Bialystok, a city in Poland.
108 RAE: John Rae

was itself searching for the elusive Northwest Passage through the Arctic Ocean connecting the Atlantic to the Pacific. John Rae created much controversy back in England when he reported evidence of cannibalism among the ill-fated Franklin explorers.
115 QUARKS: Quarks

are sub-atomic particles, found within the nucleus. There are six types of quarks, ne of which is named “up”, and another “down”. The others are top, bottom, charm and strange. One of my physics professors at college worked on the team that discovered the charm.
124 NIOBE: We talked about Niobe and the Weeping Rock a few days ago.
128 ASNER: Ed Asner